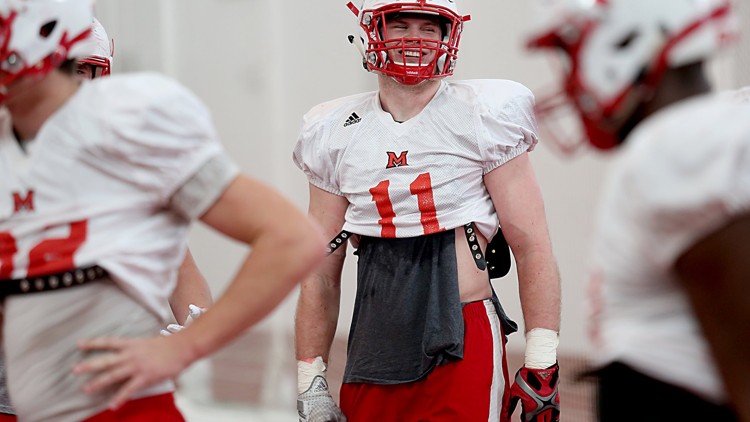 While the Steelers may have drafted a pair of outside linebackers this year, only one of them is practicing right now, and at this point, the odds are that he is going to be the only one making the roster.

For a while, the team was dealing with a number of issues at the outside linebacker position. In fact, they were down to just four healthy bodies on the 90-man roster for their first preseason game, and they did not play James Harrison, so they had to make do with just three players rotating the full game.

While they have gotten a couple of linebackers back since then, the Steelers still added another player to the 90-man roster in order to absorb some of the reps that needed to go around. So they turned to Ben Roethlisberger’s alma mater, Miami of Ohio, in order to find rookie undrafted free agent Austin Gearing.

That actually did not have to look all that far, because he was one of their many invitees to their rookie minicamp. In fact, that was inevitably the top draw for bringing him in. Because he would already have a relative familiarity with the defense, he was able to step right in and get some practice time in.

Coincidentally, Gearing was originally recruited by the Redhawks to play quarterback, which is of course the position of the only other alumnus on the roster—but Roethlisberger did sport Harrison’s outside linebacker jersey a couple weeks back…position switch?

Gearing was not a full-time starter at Miami—he only recorded four sacks his entire time there—and frankly he has to be viewed as perhaps the first or second player to be cut should they need a roster spot somewhere else.

But I think that I can speak for at least the majority of us here that when I was in my early 20s, I would have relished the opportunity to be on the field with the Steelers even if it were only for a day.