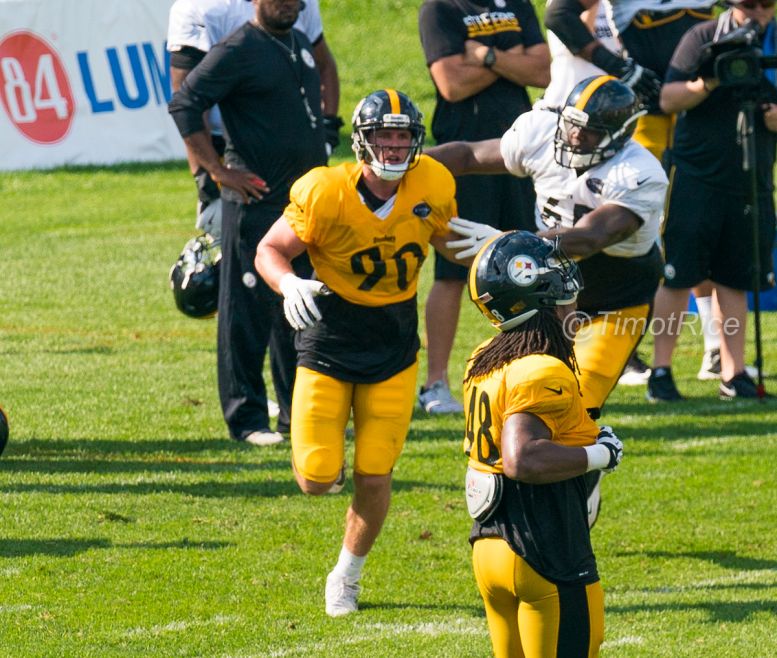 Now that the 2017 Pittsburgh Steelers training camp has concluded, we’re recapping everything that went down over these past 16 practices. We’ll break down each play, position-by-position, with final winners and losers at the end. Continuing the defense with the outside linebackers.

Bud Dupree: It’s a frustrating camp for Dupree. He was on-again, off-again with an injury I still never got clarity on. Pass rushers are always tough to evaluate in camp because they aren’t allowed to touch the quarterback so they’re always, to an extent, going to be incomplete. I am still looking for Dupree to develop a better counter. His speed move, trying to run the arc and bend at the top, is his go-to move, for better or worse, but I couldn’t tell you with confidence what his counter to that is. Part of that is because I didn’t see anything enough, part because he missed out on reps.

And obviously, he didn’t suit up for the first game or Sunday’s either, though the latter doesn’t factor into this synopsis. I would say it was a good camp for Dupree, who looked in tremendous shape and did well in backs-on-backers and flashed during OL/DL.

Big issue with him I thought was his man to man coverage ability. Struggled even against slow-footed tight ends like Jake McGee and David Johnson. Could be a problem going forward for a guy who will drop about 20% of the time.

T.J. Watt: While Alejandro Villanueva will live in his nightmares for the rest of his rookie year, Watt’s first NFL camp was wholly impressive. He showed a bit of everything. Ability to hold the edge versus the run, beat the tackles he should, and looked comfortable in coverage. That all circles back to how he was used by Wisconsin, playing with his hand up, playing on both sides, and dropping into coverage.

While guys like James Harrison got on him to use more power moves than trying to get around everyone, especially someone as big as Villanuvea, it’s a relatively minor complaint and one he’ll work on. Best of all, he showed a unique level of conditioning, no doubt aided by his football family background.

It’s hard to ask for much more from a rookie with the limited college resume he has.

Anthony Chickillo: Another impressive camp for Chickillo, the third in a row he’s had in his career. He is the most varied pass rusher of anyone on the team. Will dip the end, swim inside, convert speed to power, or offer a combination in a single rush. He can play either side and is a good athlete who is able to drop into coverage. You’d never know he was a plump defensive end a few years ago.

Aside from a minor hip flexor injury, he didn’t miss much of practice. Just two total over a 16 practice slate.

James Harrison: Aside from putting on the pads for the Family Fest practice at Heinz Field, and even then, he wasn’t in team drills, Harrison soaked through his sweats each practice. It’s fair to wonder how the team plans to get him in football shape, but he is 39 and the most rocked dude on the team. The trade off is worth it.

Arthur Moats: While Moats isn’t going to wow, it’s safe to say his spot on the roster is safe. Moats is a no-nonsense pass rusher who converts speed to power really well, once running over Marcus Gilbert in OL/DL. He’s also gotten work on the first team coverage units, indicating his job is safe and that the team wouldn’t go with 4 OLBs/5 ILBs that could still see Moats on the outside.

And obviously, three sacks in the New York Giants game is about as good as it gets. He’s also the only OLB in camp not to miss any time. Hats off.

Keion Adams: Adams got off to a promising start. A good first step who can win the edge and overall impressive athlete. Those traits looked like they could translate on special teams. But he was hurt during the 8th practice and didn’t see the field since due to a left shoulder injury. He’s an IR candidate and made the battle for the last OLB a lot less interesting.

Farrington Huguenin: A player with a bit of experience and some intriguing athletic ability, he’s practice squad material. Like his get off and change of direction ability. Maybe faded a bit as camp went on but nothing about his game is terrible. Not the strongest at the POA but shows technique to keep his outside arm free as the force defender. There’s a little something there I’d like to see more of.

Austin Gearing: The last guy on the lifeboat, signed after the team continued to get hit hard by injuries at OLB. He was in rookie minicamp, allowing him to hit the ground running and work in team from the first day on. Didn’t learn much about his game in the few practices he had, though he did line up at both OLB spots.