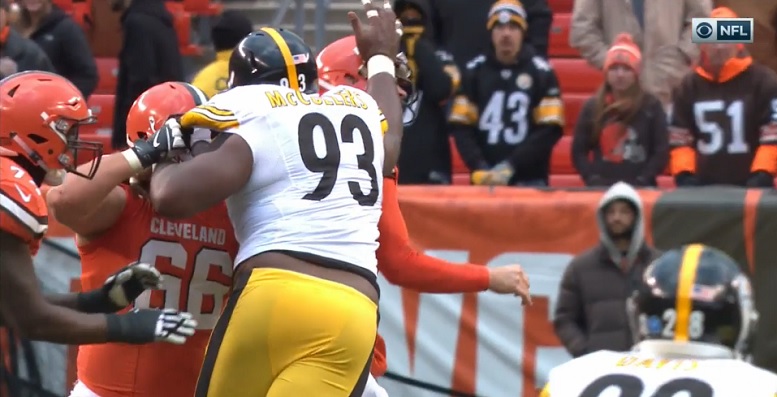 With the Pittsburgh Steelers not drafting a defensive linemen, there was no appearance made by DL coach John Mitchell. A fact that made me Ralphie-in-a-bunny-suit sad. So a hearty kudos to Steelers.com for grabbing Mitchell in an interview over on the team site to pick Mitchell’s brain.

Mitchell is known for candor and less for coach speak. He ran through the group of defensive linemen, generally praising them, but calling out Daniel McCullers to step up.

“Dan McCullers has got to grow up,” Mitchell said. “It’s time to make a move right now.”

McCullers has been unable to even bump up into the starting nose tackle role with Javon Hargrave out due to a shoulder injury. It was L.T. Walton taking first team reps, a defensive end who has never taken a snap as a base 3-4 nose tackle.

And Mitchell was blunt about what will happen if he is unable to take the next step.

“This is going to be his fourth year. Usually in this league, after about four years, you have got to make a move. Or either you move somewhere else,” Mitchell said, ending his comment with a laugh.

It’s tougher to laugh if you’re McCullers. Though a worthwhile flier in the 6th round, he’s never panned out. Simply lacking the intensity to play along the defensive line, he got his butt kicked in the training camp battle with Hargrave – the rookie won easily – and it doesn’t sound like he’s making much progress in 2017.

The Steelers don’t have another nose tackle with good odds to make the roster, leaving them to play Walton for now. There was no need to bring in another McCullers-type, a classic plugger, but as I wrote weeks ago, the fact they didn’t bring in someone else with experience playing the shade over center was surprising.

Nose tackle could be a position the team looks at during final cutdowns if McCullers isn’t able to, in Mitchell’s words, grow up.