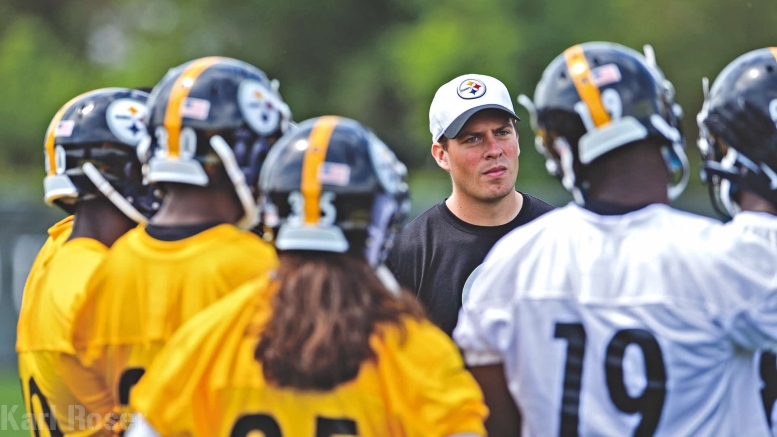 Even though his name is technically synonymous with the Pittsburgh Steelers, and the city as a whole, it is very much the case that Dan Rooney III has yet to make much of a name for himself. This would be Daniel Martin Rooney, or Danny Rooney, the son of President Art Rooney II, who is a coaching assistant on the team at the moment.

What little that we know of him so far is that he was a quarterback at Dartmouth, proceeded to intern at the NFL following his graduation from there, and then entered work for his father’s organization at the bottom rungs of the scouting department.

He worked there for two years before being elevated to the stature of coaching assistant prior to the 2016 season. We know that he was involved in bringing the robotic tackling dummies from Dartmouth into the fold last year, and we also know that he was in attendance for the Pro Day of JuJu Smith-Schuster, where he discussed the player with Lynn Swann, the former Steeler who is now the athletic director at USC, his alma mater.

In a few days, Rooney will be involved in the CBIM Training Summit that will be hosted at Heinz Field on the 20th. CBIM—Coaching Boys Into Men—is a program that seeks to foster young athletes to become behavioral models and to build healthy relationships. He sent a letter inviting local high school coaches to attend to pass on the wisdom that they learn at the summit to their players.

“Many of you know the Rooney name to be synonymous with family values, the city of Pittsburgh, and of course, the Steelers”, he writes. “While generations of Rooney men have been passionate about football here in Western PA, we’ve also been big supporters of ways to strengthen and serve our community”.

He went on to talk about the “unique role” that high school coaches play “by serving as leaders and role models for youth”, writing that “a great coach empowers his athletes to develop from good players on the field to great men in the community”.

You can no doubt be certain that his grandfather, Dan Rooney, would be proud of his efforts today in reaching out and participating in community-building, which is something that the former Chairman of the Steelers always championed and valued very highly.

“CBIM not only recognizes coaches’ ability to be great role models in athletes’ lives, but also understands that athletes are leaders in school culture who can model respectful behavior for their peers”, the letter continues. “It enables young men to take ownership in exhibiting and encouraging healthy relationship for others”.

As I have said, there will be a lot of focus drawn over the course of the next several years of Dan Rooney III, who would at least hypothetically by the next in line behind his father, as Art Rooney II succeeded his father. I would say that the 27-year-old is off to a good start.