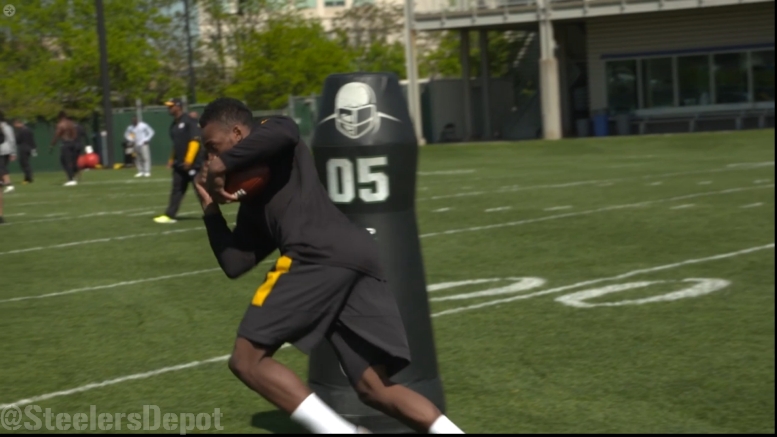 When it comes to a global view of sports, there is, of course, no time like the present. All too often, however, we also become entranced with the past. Studying where we came from will always have value, of course, but I find the future just as intriguing a prospect, particularly when it comes to the way the game is practiced and officiated.

The Pittsburgh Steelers and head coach Mike Tomlin are also investing in the future. As Teresa Varley detailed on the team’s website yesterday, Tomlin brought an MVP with him to practice recently—that is, a Mobile Virtual Player, an automated tackling dummy, essentially, that will run away from you.

This is a technology that I have come across a couple of times through the development phase at Dartmouth College, where, according to Varley, Tomlin looked to Daniel Martin Rooney, who played at Dartmouth, and is a member of the team’s staff as a scouting assistant.

The MVP was even featured on The Late Show With Stephen Colbert late last year, during which he interviewed Buddy Teevens, the head football coach at Dartmouth, who ended the practice of live tackling due to the frequent occurrence of injuries, and sought to replace that element, which gave birth to the idea of the mobile tackling dummy. Colbert even got in on the action.

As much of a traditionalist and historian of the game that Tomlin can be sometimes, he often has a forward-thinking element about his methods, and the Steelers have not been entirely opposed to incorporating a variety of technology in the past. He was ahead of the curve in adapting to the usage of the two-point conversion as a proactive measure.

He described the MVP as “an awesome piece of technology” and said that he is “always interested in ways to utilize technology in terms of teaching football. We are excited to get a close look at it”.

One element of the tackling dummy that Tomlin appreciated is the fact that there seems to be no shortage of applications for its usage, the numbers of which continued to multiply as the players on the field found out for themselves by the natural processes of practicing. “They show you the applications”, he said.

Because of the tackling dummy’s mobility, speed, and ability to change angles, it has the capability of mimicking a variety of potential roles. Varley notes that the Steelers began using it in passing drills and as a running back.

The NFL has dramatically reduced teams’ opportunities to engage in live tackling drills due to player safety concerns. Many have attributed to this an erosion of the standard fundamentals of tackling, which is responsible for a rise in the number of missed tackles that we see on Sundays.

A tool such as this can assist in that. While player-on-player contact has been greatly reduced, the MVP is designed in many ways to simulate an opposing player, and nobody particularly cares if you injure a robot who isn’t being paid at least hundreds of thousands of dollars.

The model that the Steelers had the opportunity to use, according to Varley, is still in the testing phase, with aspirations of making it widely available next year. This has the potential to become a standard practice tool on football practice fields at all levels, particularly in the era of the safety initiative, and is a fine fill-in while the sport learns to bridge the virtual reality gap as a training method.