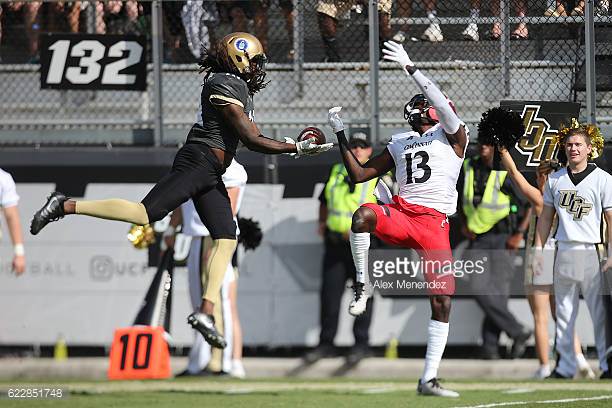 The Pittsburgh Steelers have a few unreported pre-draft visitors ahead of Thursday’s annual college selection process and now we know that UCF cornerback Shaquill Griffin was one of them.

“As far as my visits, I can name some that I remember,” Griffin started. “I know I had almost close to 15 visits so I can name them. It’s going to sound crazy, I went from Miami to Dallas to Seattle to Pittsburgh to Baltimore to Washington to Oakland to Indianapolis to Tampa, Tennessee, Houston, Philly and I had like maybe five other teams that wanted me to come and visit, but you know the schedule’s so tight that I had multiple private workouts. So, I’ve just been a busy man.”

Griffin, who measured in at the scouting combine at 6001, 194-pounds, said Monday during an interview on SiriusXM NFL Radio that the Steelers were one of several teams that he had pre-draft visits with.

During his four seasons at Central Florida, Griffin registered 125 total tackles, seven interceptions and 36 total passes defensed in the 46 games that he played in of which he started 27. He’s currently pegged as potentially being a day-two selection in the 2017 NFL Draft.

During Monday’s interview, Griffin was asked to describe the style of defense he played in at Central Florida.

“At Central Florida we run a true 3-4 defense with the two stand-up d-ends and we kind of switch it up a little bit,” Griffin said. “Our safe call that we always go to if everything goes wrong is a true quarters and we can go from there to man-to-man depending on down and distance. So, we had a chance to a lot a little bit of both. We kind had some freedom to give some calls that we wanted to play so coach definitely did a really great job of letting us trying to just be comfortable and just kind of play how we wanted to play. But our true coverage was pretty much quarters across the board – kind of play a little bit of zone.”

Griffin also talked about where all he lined up in the UCF defense during his career.

“Played nickel, played both corners, played both safeties,” Griffin said. “Kind of moved around and definitely did special teams. I just played whatever they needed me to play at and one time I wanted to play receiver, but coach wasn’t having that.”

In case you haven’t read Griffin’s backstory yet that includes his twin brother Shaquem Griffin having his left hand amputated at the age of four as the result of amniotic band syndrome, a congenital birth defect, it’s certainly worth your time. Despite his disability, Shaquem also played at Central Florida.

“My brother had a huge chip on his shoulder and he got a chance to show people that he can play,” Shaquill said Monday of brother Shaquem. “so he definitely deserves the year he had and I’m definitely proud of him and something special coming next year for him and me also.”

Griffin, if you remember, fits what the Steelers look for as far as cornerbacks go as Alex Kozora pointed out recently in one of his studies.