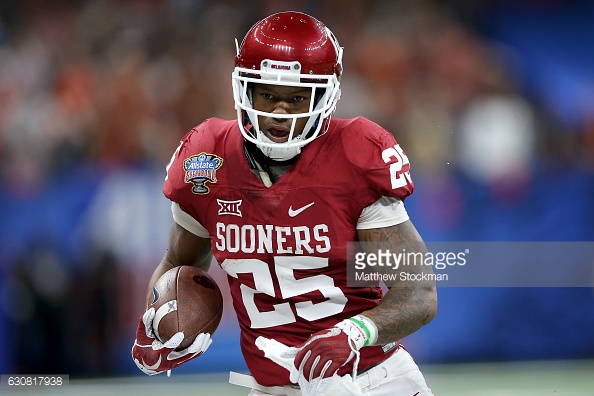 Continuing the updates around the Pro Day circuit, it appears the Pittsburgh Steelers have sent running backs coach James Saxon to workout Oklahoma running back Joe Mixon. OUInsider’s Joey Helmer posted this short video of Mixon going through drills with Saxon leading him through.

Mixon is so smooth. Has been unbelievable today. #Sooners pic.twitter.com/7OrQpe874s

Official numbers (given to all teams) for Mixon at Oklahoma pro day:

This is all the more notable for Mixon’s backstory, one you’re probably familiar with. Mixon reached a plea deal in court after punching a woman in the face in 2014. He was suspended by the Sooners for the entire 2014 season before coming back to find success on the football field for the final two. He was not invited to the NFL Combine due to new policies that ban players who have a history of domestic violence, weapon, and sexual assault convictions.

It makes it understandable for teams like the Steelers to be in attendance, knowing this is the only chance to watch Mixon workout – if Helmer’s tweet is an indication, the workouts went well – and one of the few times to talk to him and his family. But it means it’s clear Mixon is not off the Steelers’ board. Not every team feels the same way.

Per Sooner Sports, Mixon ran a 4.43 40 and jumped 35 inches in the vertical at today’s workout at 6’1, 228 pounds. He averaged 6.8 yards per carry last season and rushed for ten touchdowns. From a pure talent standpoint, some scouts believe he is the most talented running back in this year’s draft though with his off the field problems, it’s impossible to know where he’ll be selected. Most think he’ll go somewhere on Day Two.

The Steelers are looking for a backup to Le’Veon Bell and if they want to be aggressive about it, the third round is when they may begin looking for that guy.