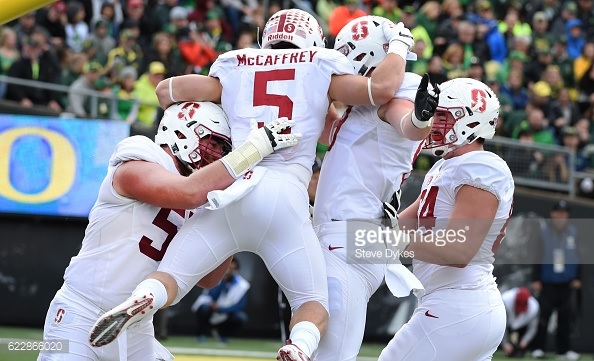 Just like that, Day One of the NFL Combine is in the books. Let’s recap the good, the bad, and everything else from the offensive line and running backs.

– It’s not a surprise given their size but the USC kids were slowww. Zach Banner ran a 5.58 and Damien Mama turned in a 5.84 with ten splits were 1.92+ each. Banner struggled to move and definitely can’t play tackle at the next level while Mama was totally gassed by the end of his workout, his feet stuck in the mud by the time he got to the mirror drill. Wouldn’t draft either.

– Utah’s Garett Bolles didn’t rewrite the record books but still looked good today. 4.95 40, an absurd 9’7″ in the broad (tied 4th best mark for an OL since 2008) which highlights his lower body strength. Went 4.55 and 7.29 in the agility drills. Fluid and athletic in drills, not showing any stiffness in his hips. Certainly did nothing to hurt his stock or make teams go have to reevaluate him.

– In a way, Aviante Collins was this year’s Terron Armstead. Guy most people didn’t know a lot about who blew the doors off numbers wise. Led the pack with a 4.81 40 and 1.7-ish ten split. Put up 34 reps on the bar while maintaining a wide base in drills. Good feet and lateral agility to mirror.

– IUP’s Ethan Cooper had a really good day. Didn’t test well much of anywhere but was impressive in drills and for a small school kid, that’s the most important thing. More athletic than I thought and has a big lower half that helps create power on his first step. Reminds me of Louisville’s John Miller, who I was high on coming out.

– Dion Dawkins continues to do Temple proud. 5.11 40 and a really strong 7.3 three cone time. Solid Day Two pick for me and could creep into the second round.

– If you missed it on the broadcast, Florida State’s Roderick Johnson didn’t go through any workouts today due to an illness. Will have to wait until his Pro Day.

– Jesse Dunker is tight-hipped and was all over the place in drills. Running over the line when trying to mirror and struggled to stay straight down the hash. One of those guys it’s easy to see where his issues are at.

– Someone tell me why Taylor Moton isn’t a first round pick. Moves effortlessly, really good feet and the ability to clear his hips. Another guy with a powerful lower half that creates explosion off the ball. Able to sink his hips and keep his base while moving laterally. 1.85 ten split at 319 pounds and he rocked it with a 30.5 inch vertical and 9’1″ broad jump. First round worthy for me.

– I haven’t really studied him but Cam Robinson’s workout falls in line with what the people I trust are saying. He’s not a perfect player yet but a really good athlete who should be able to play in the league for a long time.

– San Diego State’s Nico Siragusa isn’t the most athletic guy out there (5.35 but a nice 1.84 ten split) but he’s a smooth player who doesn’t show much stiffness. Good workout today, an even bigger boost after breaking a finger at the Senior Bowl early on the first day of practice.

– Daniel Skipper is the near 6-10 tackle we mentioned yesterday. You can see the height work against him as a run blocker, unable to uncoil his hips and drive up through the bags on the fold blocks the linemen were working on. Frankly, I don’t know how a guy like Alejandro Villanueva is able to do it. That’s a rare talent.

– William & Mary’s Jerry Ugokwe looks the part but his feet were clunky, his hips were stiff, and he had trouble moving down the line without weaving all over the place.

– Leonard Fournette had a drama packed day. From weighing in at 240 pounds and jumping just 28.5 inches in the vertical, he shut everyone up with an insanely good 4.51 40 time. He was fighting catching the football, predictably struggling because he did so little of it at LSU but he did catch most of them. So kudos there.

The dude can fly for how big and built he is and he will be the first back off the board in the draft.

– Dalvin Cook was a little more concerning coming in 30 pounds lighter and jumping just two inches higher, though ITP’s Ethan Young made the point that a vertical number doesn’t matter as much for zone-type runners like Cook (or LeSean McCoy, Jamaal Charles types, who had similarly poor numbers). One area he had problems was catching the football cleanly. Several drops and trouble locating the football deep.

– I don’t mean to be tough on SDSU’s Donnel Pumphrey, there is inarguably some talent there, but his 40 time at 176 pounds a – 4.48 – is underwhelming, to say the least. He struggled to catch passes cleanly too and I just struggle to find out how he’s going to win in the league.

– Corey Clement disappointed me. I liked his feet in drills but a 4.68 40 time is several hundredths away from what I was hoping for, at worst A 28.5 inch vert and 9’7″ broad aren’t numbers to love either.

– Christian McCaffrey entered the Combine with some negative press but he ended it with everyone buzzing. A strong 4.48 at 5’11 202 pounds, 37.5 inch vert, and maybe most impressive of all, a 6.57 in the three cone. Since 1999, only Chris Rainey posted a better number.

McCaffrey, as expected, looked natural out of the backfield and the NFL Network cameras caught him taking part in wide receiver and return drills after most everyone else had left. Late first round pick, for sure.

– Rushel Shell…not good. I get he’s 227 pounds but an official 40 time 4.74 is ugly. That alone might prevent him from getting drafted. He should shed a couple pounds and hope to run well at his Pro Day.

Be sure to look for a preview of tomorrow – quarterbacks, wide receivers, and tight ends – going up bright and early on the site.