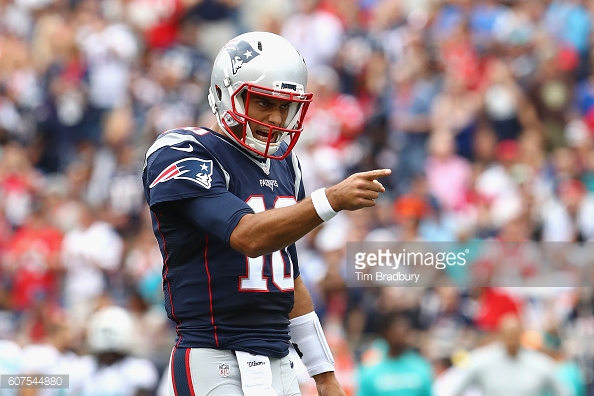 Stop me if you’ve heard this one before: the Cleveland Browns are in the market for a quarterback. But this time around it appears that they might have a specific quarterback in mind if certain reports are to be believed.

Mary Kay Cabot recently reported for Cleveland.com that the Browns have the intention of attempting to acquire Jimmy Garoppolo from the New England Patriots, who started two games for them this season while Tom Brady was serving a four-game suspension at the start of the season. He was then sidelined by an injury that prevented him from starting in the third and fourth games.

Garoppolo completed 43 of 63 passes during the 2016 season for a completion percentage of 68.3, throwing for 502 yards at eight yards per pass attempt. He threw four touchdowns versus no interceptions and was sacked three times. He fumbled twice and lost one of them and finished with a quarterback rating of 113.3.

He has a career 5-0 touchdown to interception ratio and a 67 percent completion percentage with a 106.2 quarterback rating.

Kabot writes that there are several teams expected to be in the bidding for Garoppolo, whom the Patriots are preparing to put on the market. They are apparently looking for a first- and fourth-round draft pick for him as compensation.

One thing the Browns do have at their disposal is a war chest full of draft picks, including the number one overall pick, and four picks in the top 52 of the draft over the span of the first two rounds. Cleveland held the second overall pick a year ago and elected to trade back multiple times, passing up Carson Wentz, in order to acquire more picks, instead selecting a wide receiver at 15.

The Browns took the free-agency route of finding a quarterback last season, signing Robert Griffin III to a two-year, $15 million deal, but he was injured in the first game and only returned late in the season, though he did manage to win one game. Cleveland doesn’t sound like they plan on him being their future.

Head coach Hue Jackson said recently that he came to Cleveland to coach the quarterback position, “and I plan on doing that”. He came to the Browns with a reputation of doing well with quarterbacks, including Andy Dalton with the Bengals as their offensive coordinator.

“I’ve been doing this for a long time and I’ll put a quarterback on this team that can win. That’s my job. We’re going to do it collectively as a group. But hopefully we’re going to lean on my expertise and what I need at that position to win”.