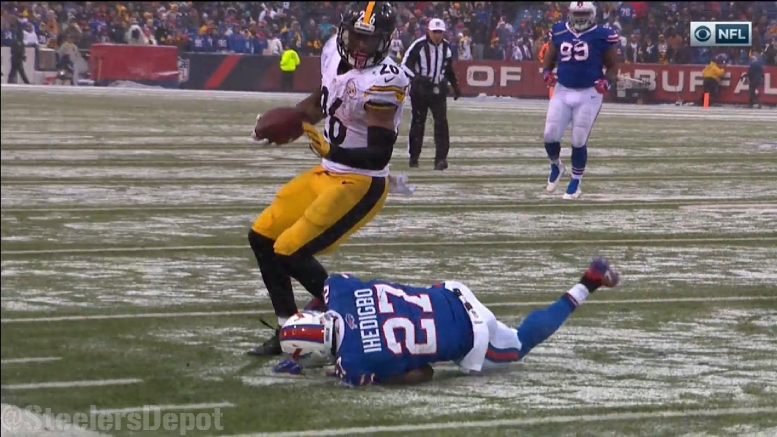 Four weeks, four straight wins for the Pittsburgh Steelers in impressive fashion. Sunday’s game against the Buffalo Bills in less than ideal conditions was a big game for the Steelers, so taking care of business the way that they did was very encouraging to see.

I thought Ben Roethlisberger was downright miserable against the Bills as his road woes continue. While conditions were quite poor, it doesn’t excuse the bad game that No. 7 turned in in a big spot.

The veteran quarterback completed just 17 of 31 passes for 220 yards and three terrible interceptions. Fortunately for Pittsburgh, the three picks didn’t come back to haunt them as the running game and defense was able to pick up the slack.

That’s now four straight 100-yard rushing games for Le’Veon Bell, marking the first time since 2004 (Jerome Bettis) that a Steelers running back has accomplished that in four straight games.

Reminiscent of the Tennessee Titans game in 2014, Bell had a field day against the Buffalo defense, rushing for an NFL season-high 236 yards and three scores on 38 totes, averaging just over six yards per carry.

Outside of his tremendous accomplishments on the ground, Bell added four receptions for 62 yards on the day, finishing just shy of 300 total yards.

Roosevelt Nix was instrumental in opening up rushing lanes for Bell on the day. It appears as though the Steelers have found that weapon they needed at fullback.

While I have acknowledged that Roethlisberger was dreadful on the day, his receiving corps didn’t really help him out much by creating separation against the Buffalo secondary.

Antonio Brown had a solid day in bad conditions, hauling in five passes for 78 yards, including a 40-yard bomb in the first quarter to get the Steelers going.

Outside of AB, Eli Rogers finished with just three receptions for 20 yards, while Cobi Hamilton added one catch for 15 yards in the win.

Overall, the grades for the receiving corps has been down over the last few weeks, but I feel as though that has more to do with the game plan at this point instead of the lack of production. That being said though, come playoff time the Steelers are going to need one of Rogers or Hamilton to step up in a big way to take heat off of AB.

Targeted six times in the win, Ladarius Green finished with just two receptions for 25 yards against the Bills and might have had some miscommunication with Roethlisberger on his first interception of the game.

David Johnson proved to be a tremendous run blocker once again, helping Bell have a career day while also hauling in a big fourth down pass in the flat before rumbling for 15 yards.

Jesse James continues to look mostly lost as a blocker, especially on pulling plays where he looks so hesitant at times. As a receiver, James hauled in just one pass for five yards in the win, and was the target on Roethlisberger’s final interception of the game in the end zone.

What a performance by the big guys up front, namely BJ Finney.

The former undrafted free agent out of Kansas State filled in for an injured Ramon Foster and had the best game of his life. Finney was an absolute mauler on the ground, handling Marcell Dareus with ease, while also serving as a solid pass protector in between Alejandro Villanueva and Maurkice Pouncey.

David DeCastro and Marcus Gilbert also had solid days as run blockers, paving the way for a team rushing performance of 240 yards (5.7 yards per carry) in the snow. That’s old school football right there.

Shorthanded once again, this unit came up big against one of the top three rushing offenses in the league.

Led by Stephon Tuitt, the Steelers held Buffalo to just 67 yards (3.7 yards per carry) in the win, while LT Walton had himself a strong game as well.

The second-year defensive end finished with two tackles, including a tackle for loss while filling in for Cam Heyward.

With no Heyward and Javon Hargrave, the Steelers defensive line lived in the Buffalo backfield for most of the day.

Have yourself a game, Bud Dupree!

In just his fourth game back from injury, Dupree was a force off the edge, finishing with five tackles, three tackles for a loss, two sacks and two quarterback hits for the Steelers.

As of now it looks like the Steelers really found something special with Dupree.

Along with the second-year outside linebacker, Ryan Shazier was all over the field for the Steelers, finishing with eight tackles, one sack, one tackle for loss, one quarterback hit and one pass deflection.

Lawrence Timmons and James Harrison recorded just one tackle each, but the standout play of Dupree and Shazier was more than enough for this unit.

At times this unit looked really, really strong, but other times they looked lost and appeared to forget how to tackle.

Fortunately for the Steelers, it really didn’t matter in the end.

Artie Burns continues to really impress down the stretch. The rookie picked off his third pass of the season on a great play in zone coverage, baiting Tyrod Taylor into a bad throw. Burns also finished with three tackles and a pass deflection.

Opposite of Burns, Ross Cockrell had a statement game against his former employer. Although he didn’t record an interception, Cockrell was all over the place for the Steelers, finishing with four tackles and one pass deflection while looking terrific in run support.

William Gay had what looked to be a pick-six for the sixth time in seven interceptions, but a questionable holding call on Burns wiped out the touchdown. Outside of that, Gay finished with five tackles on the day.

At safety, Sean Davis continues to put together one good game after another as the rookie finished with seven tackles, three quarterback hits, 1.5 tackles for loss and 1.5 sacks in the win. Davis has become a force in the box, serving as a lethal blitzer in certain packages where he gets a free run at the quarterback.

Mike Mitchell left the game with a hip injury for a few series’, but the veteran was able to return. Although he was quiet, Mitchell didn’t make any mistakes.

That being said though, Davis and Gay ran into each other attempting to tackle Charles Clay in the third quarter, allowing the Buffalo tight end to slip through for a 40-yard touchdown.

This was a much better performance from the special teams this week in terms of penalties, as Sammie Coates was the only guilty party during the game, picking up a holding call on a punt return by Brown in the first half.

Jordan Berry continued to boom punts when called upon. Berry averaged 50.1 yards per punt on his only two tries of the game, dropping one inside the Buffalo 20-yard line.

In the return game, Fitzgerald Toussaint looked good, averaging 23.5 yards per return for the Steelers, while Brown added seven yards per punt return against the Bills.