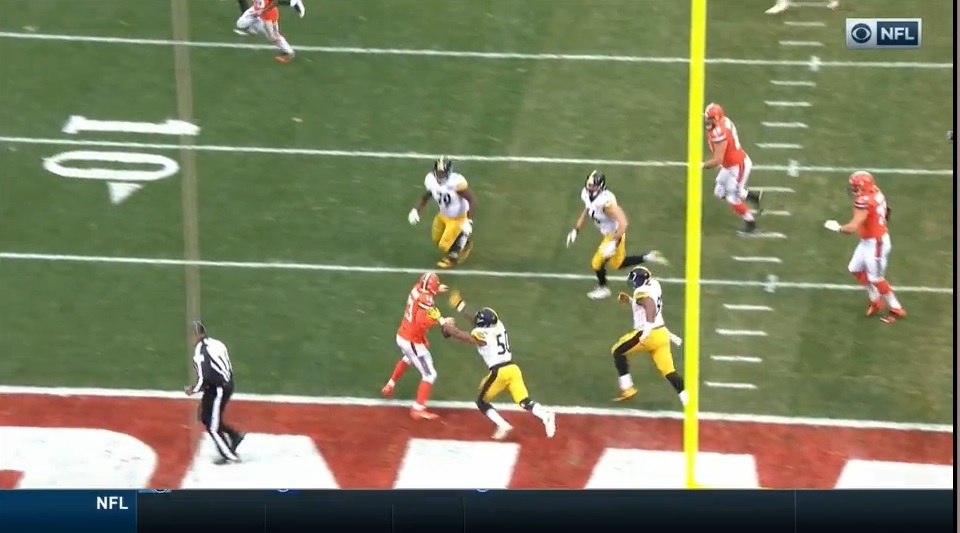 The Pittsburgh Steelers took on the winless Cleveland Browns on this snowy Sunday afternoon, as both teams were incredibly desperate for a win. It would eventually be the Steelers who would grab the victory, behind a stellar performance by Le’Veon Bell and a tout defensive display. The Steelers snapped their 4 game losing streak by beating the Browns 24-9.

The game started with a splash, but unfortunately it was for the Browns’ offence. Terrelle Pryor hauled in s 38 yard reception over Ross Cockrell by deploying the double move. As Steelers fans have seen this narrative before, most probably believed they would cap off the drive in the end zone with 6- wrong. Artie Burns grabbed his second career interception on a deep pass intended for Corey Coleman.

Conversely, the Steelers began to hop on the Le’Veon Bell train all the way into the Browns’ territory. The 16 play, 87 yard drive was eventually capped by a 32 yard Chris Boswell field goal, but it’s important to note that 9 of those plays were in the hands of Le’Veon, as both a runner and a receiver. Pittsburgh jumped to an early 3-0 lead.

After forcing a Cleveland punt because of some pressure and blitzing (!), the Steelers moved once more down the field with ease. This drive, like the last, would also end in a Boswell field goal (this time from 33 yards), after a successful 4th down conversion and stringing together 16 plays for 73 total yards. The lead extended to 6-0. Ben Roethlisberger looked good, considering the high winds and cold temperature.

The Steelers would finally find the end zone at the end of the half, after an 11 play, 55 yard drive. This one, though, was a bit unorthodox; the offense was given 2 additional opportunities with 0:00 on the clock to punch it in within the 5 yard line thanks to a few Cleveland penalties.

It was an aggressive decision, as Mike Tomlin could have simply went with the conservative field goal, but does that sound like him? It would be Le’Veon Bell who would finally find the end zone, capping off an incredible first half that saw him accumulate 135 total yards in addition to the score, and the lead team with 7 receptions. David Johnson would catch a 2 point conversion along the goal line, making the game a clean 14-0.

Pittsburgh dominated the first half with over 20 minutes of possession, as Cleveland looked to have no energy whatsoever. Their 18 first downs compared to Cleveland’s 4 definitely tell a story; Pittsburgh also went 4-7 on 3rd downs, and had 217 total yards of offense. Cleveland, on the other hand, put together only 50 yards of offense. Furthermore, the defense was able to get pressure on Cody Kessler, accumulating 3 sacks and a few hurries.

The second half began with a bang for Cleveland- the Browns were able to make their way into the Steelers’ territory for the first time all day. A 22-yard catch-and-run by Duke Johnson was followed by another deep Pryor reception against, you guessed it, Cockrell.

Thankfully it would be James Harrison who would halt the drive by making history; Harrison’s sack made him the Steelers’ all time leader, passing Jason Gildon. The Browns would have to settle for a 24 yard Parkey field goal, cutting the lead to 14-3.

The narrative of red zone stalls would continue once more for the Pittsburgh offense, as Roethlisberger and co. would put together a 13 play, 76 yard drive that would end wit a 22 yard Boswell field goal, extending the lead by 3 to 17-3.

The defensive pressure would take its toll on Cody Kessler, as he had to leave the game being forced into concussion protocol after taking a hit to the head area. The entrance of Josh McCown seemed to have sparked some energy and rhythm- the offense would finally find the end zone, with an 11 play, 75 yard drive that was capped off by a 15 yard Gary Barnidge touchdown reception. Parkey would miss the extra point, so the lead would only be cut by 6 to 17-9.

The Browns would force a punt and receive the ball to attempt a game tying drive, but that’s as close as they would come as it all went south. The incredibly tout defense all day added their 8th quarterback sack, this time by Ryan Shazier who was flying all over the field for the entire 60 minutes. The sack would result in a strip on the Cleveland goal line, and was recovered by Javon Hargrave for the defensive touchdown. The lead extended to 24-9, as it was quite a performance by the defense all game long.

The Steelers beat down the Browns by a score of 24-9. The Steelers snap their 4 game slide, while the Browns’ winless campaign grows to 11 losses. It was quite a game by Le’Veon Bell, but the spotlight should be on the Steelers’ defense- they finished the day with 8 sacks, an interception and a defensive score. They look to keep the good vibes going next week against the Indianapolis Colts on Thursday night.