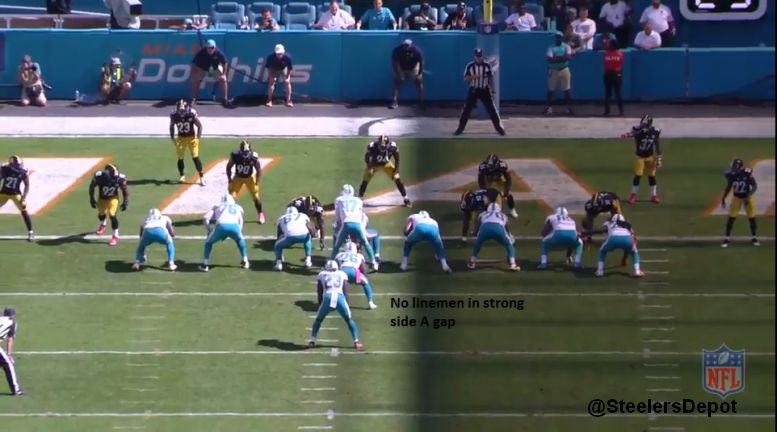 If you’re able to handle it again, notes from the Pittsburgh Steelers’ 30-15 loss to the Miami Dolphins.

– Punt coverage. Darrius Heyward-Bey and Gilbert the gunners. Jordan Dangerfield and Sean Davis the wings with Robert Golden returning to his spot as the upback. On the line: Vince Williams-Steven Johnson-Greg Warren-Tyler Matakevich-Anthony Chickillo

– Hargrave false step, out of position for his run fill on this zone run. 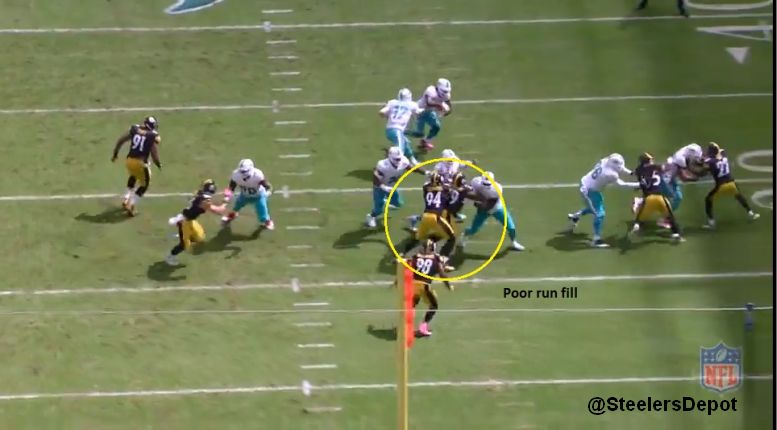 – Motion DHB between guard and tackle, serves as a lead blocker with Roosevelt Nix. Nice design. 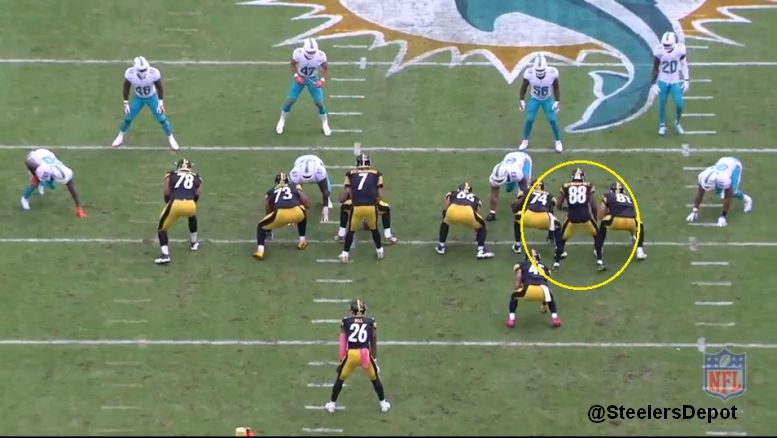 – Alejandro Villanueva at his best when he is the aggressor in pass protection. Makes initial contact, gets in control. 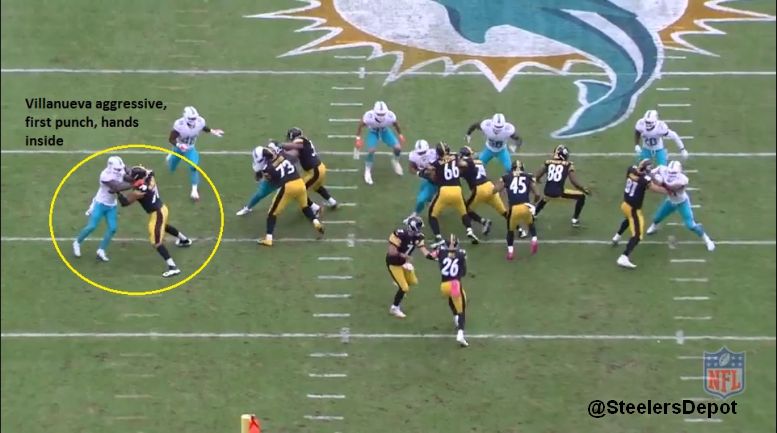 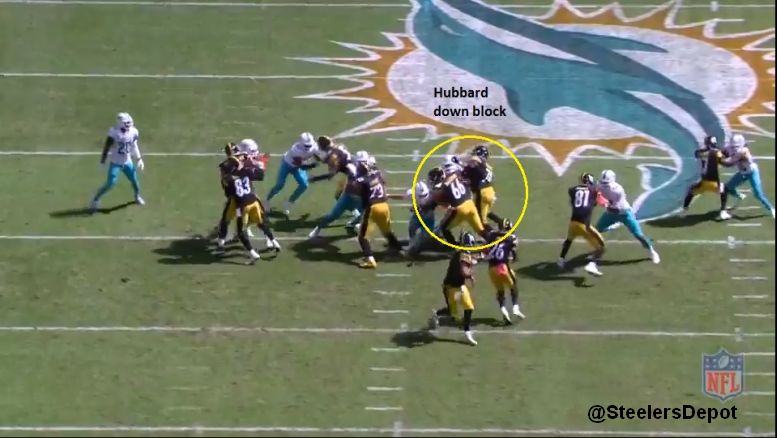 – CB blitz forces the ball out hot or else this would’ve been a big gainer to Bell. 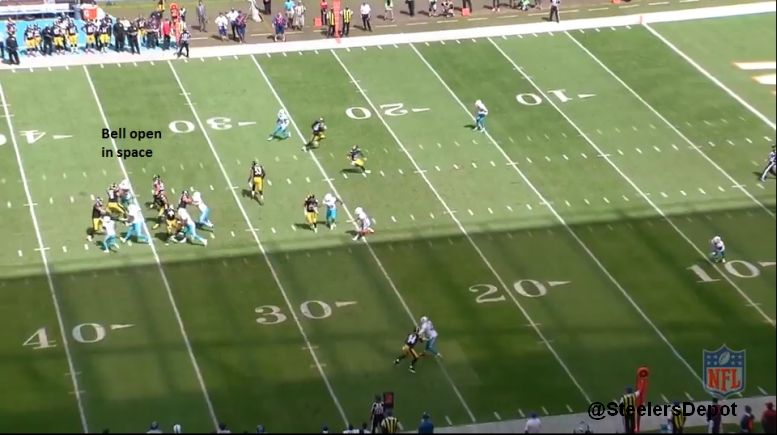 – Nice flow and fill be Vince Williams. One of the few good run stops of the day. 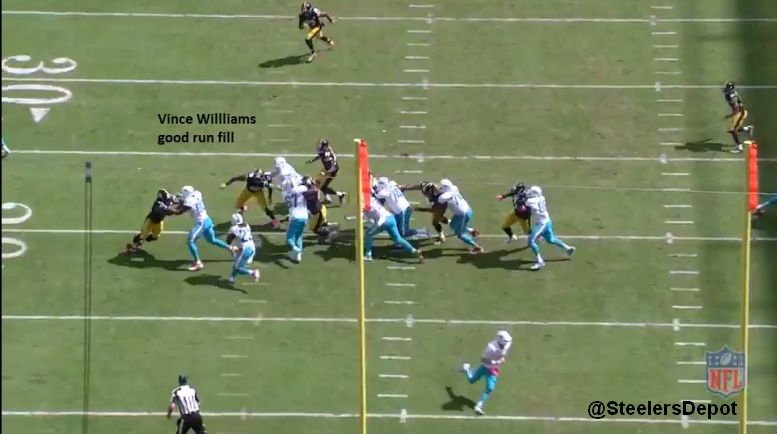 – Can’t let the Dolphins complete this pass with the overhang defender and cornerback bracketing. Blah. 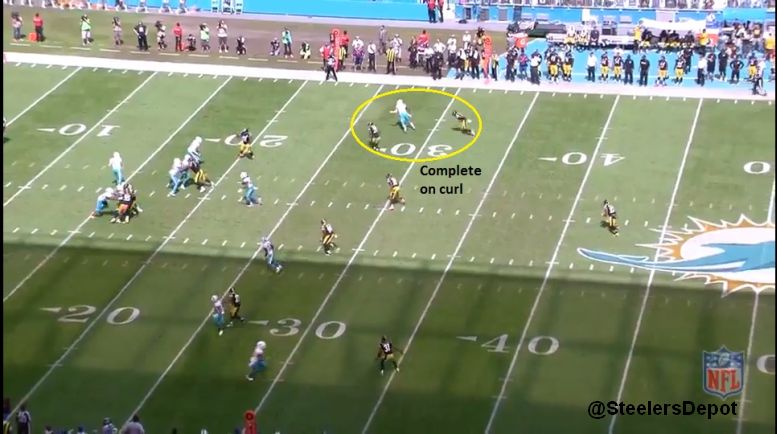 – New look from the Steelers. Two three techs. But it allows the center a free release to combo the LDE and the RT to the LOLB. Predictably, no push at the LOS. 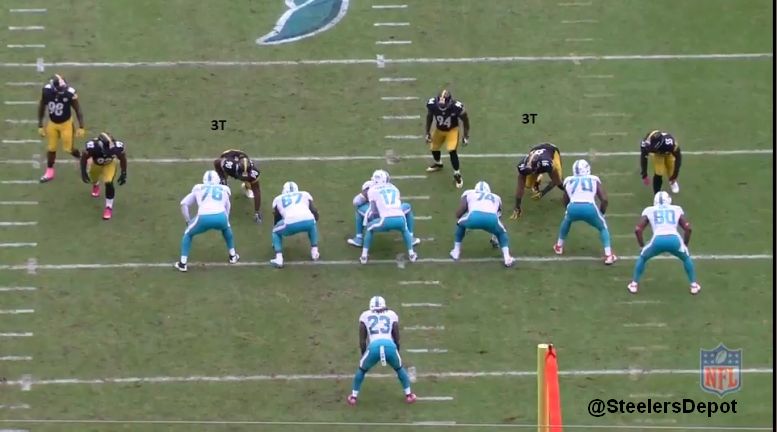 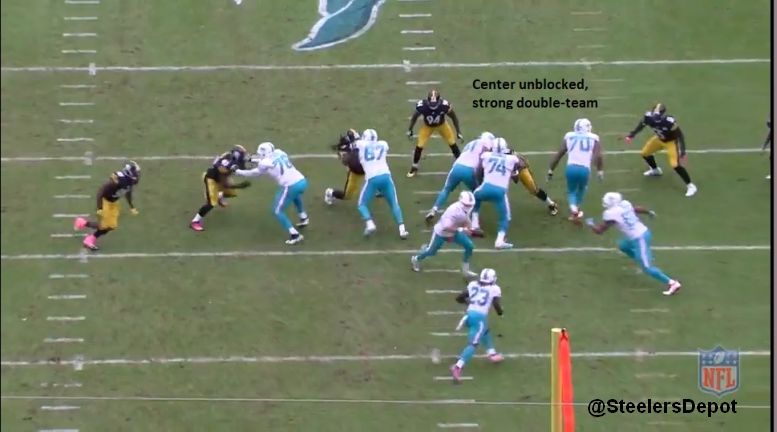 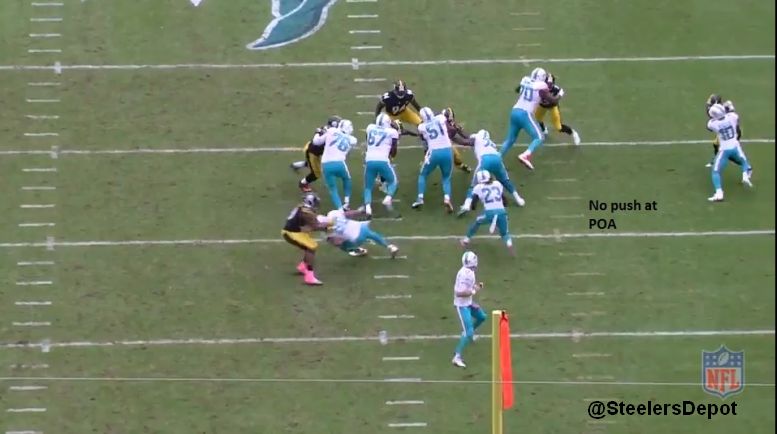 – Great work by James Harrison to cross the tight end’s face and crash in from the backside to make the stop.

– Ross Cockrell playing the pocket really well. Breakup. Been strong in coverage. Against the run? Meh. 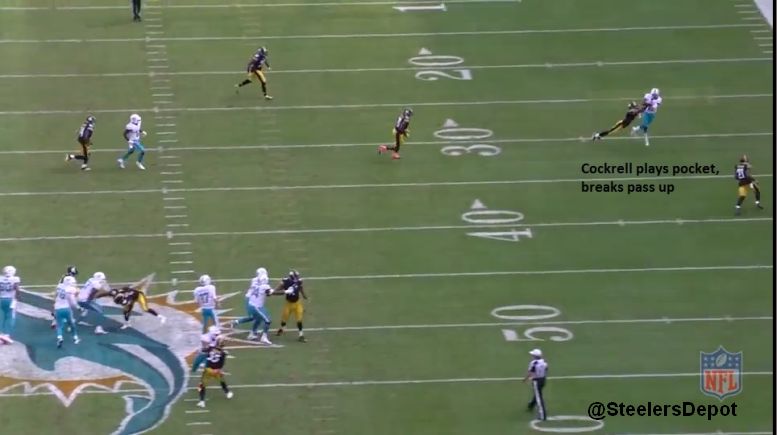 – I don’t know what this nonsense is. One tech to the weakside, A gap wide open on the Dolphins’ TD. FB dive. Awful.

– Gilbert made two players miss on his kick return right before the end of the half. 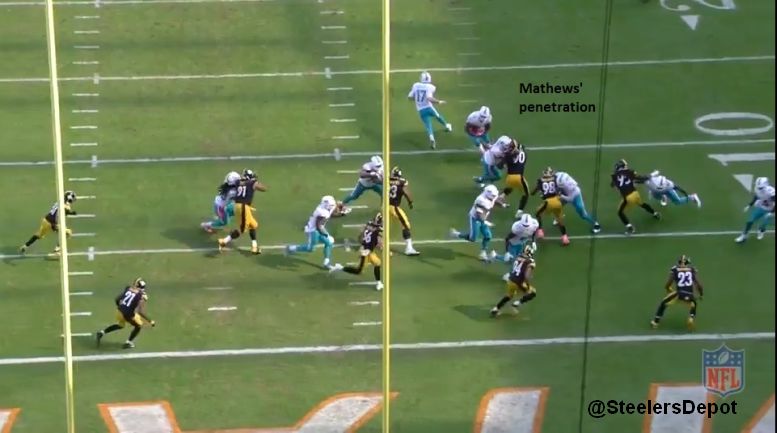 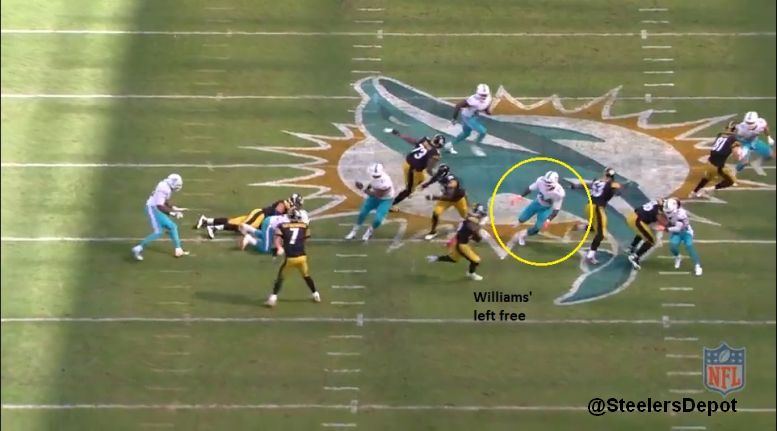 – Steelers adjusted to the problem they had with their two three techs. Moved Lawrence Timmons directly over center so he couldn’t have a free release. Seemed to help. Good adjustment. 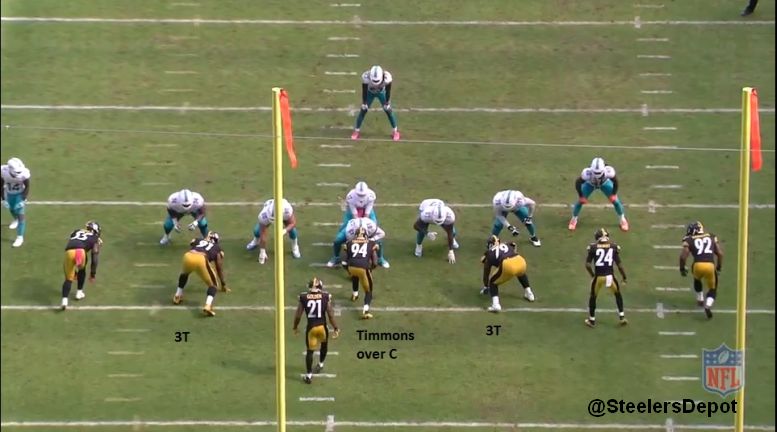 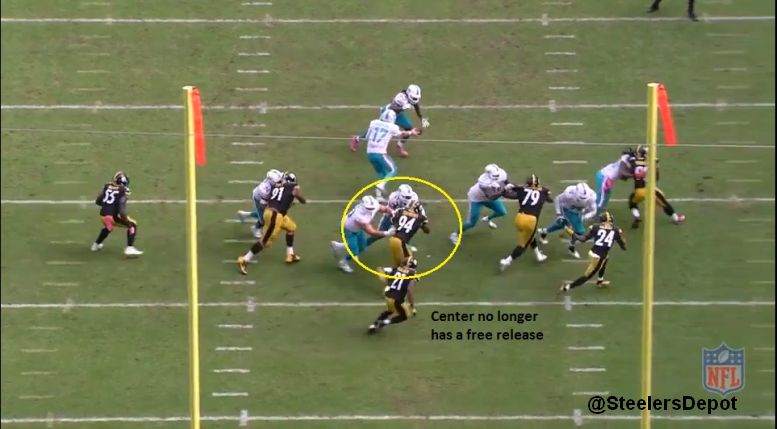 – Ben Roethlisberger forcing this throw to Brown, who has no space and is clearly covered, and misses an open Eli Rogers. Rough day. 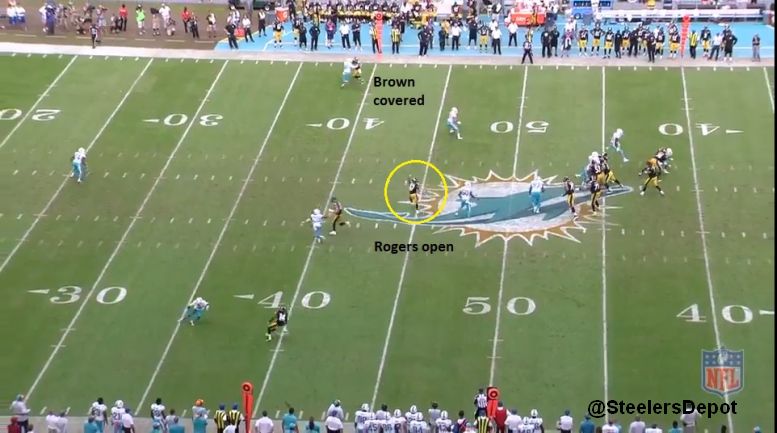 – Tyler Matakevich with vision, ability to shed, and make the tackle. Really sound tackler and it was an impressive performance in that regard. 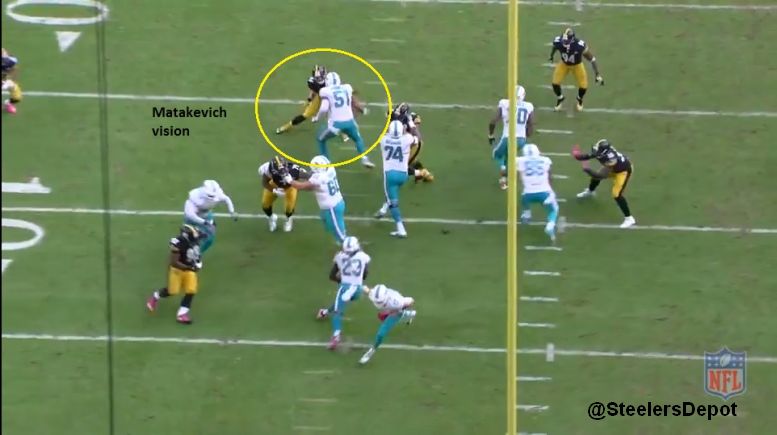 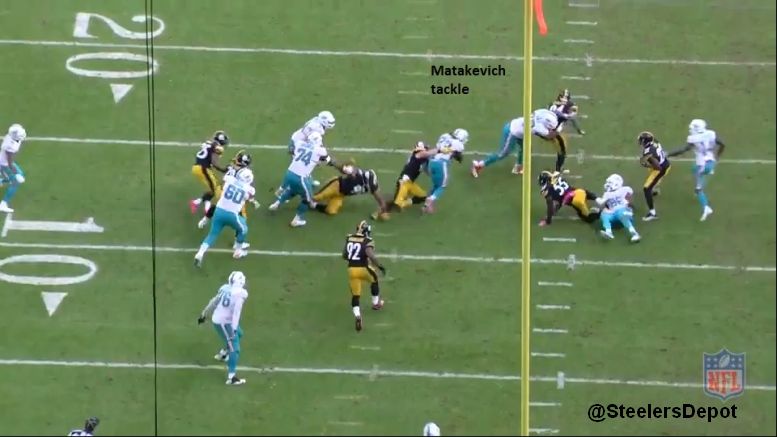 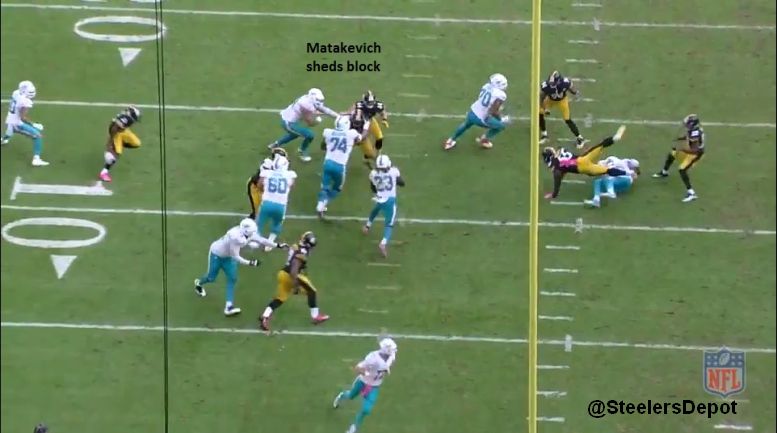 – Hargrave lined up as a cocked nose and able to get penetration to force a cutback. Rallies, good effort, and makes the tackle.