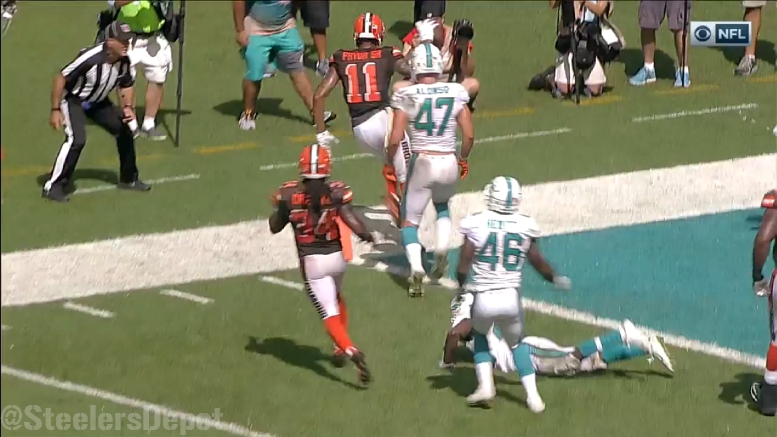 Sunday afternoon was probably the first time that former Ohio State quarterback Terrelle Pryor lived up to all the potential that others saw in him entering the professional ranks, and he did it seemingly every which way, contributing as a wide receiver, runner, and quarterback, even though the Cleveland Browns ended up losing the game in overtime.

During the game, however, Pryor, at least, was excellent, catching eight passes for 144 yards, including a 40-yard catch-and-run reception. He also carried the ball four times for 21 yards, gaining 15 on one carry, and he also scored a touchdown on the ground, taking the snap out of the Wildcat and beating the nearest defenders to the pylon.

And it is beginning to reach the point at which you have no choice to take what he is doing seriously as a player who has fully converted into an offensive tool. All that it took in order for him to translate his natural abilities to the NFL level was for him to accept that he could not serve as a full-time quarterback against this sort of competition.

Once he bought in to the reality that he would be playing wide receiver, his development over the course of the past year has been significant and pronounced, and that, of course, culminated in him being named one of the Browns’ starting wide receivers at the beginning of the season.

Pryor is now the Browns’ top target for the foreseeable future after they lost rookie first-round draft pick Corey Coleman with a fractured hand, and it is unclear at what point he will be able to return this season. but Sunday was Pryor’s first taste in that clear top role, and the results speak for themselves.

Head coach Hue Jackson was the one who gave him a chance, and he talked about Pryor yesterday, saying that “there’s a lot of things I know about Terrelle that maybe a lot of people don’t”, speaking to “what he is really capable of doing”. Jackson said that “he hasn’t even scratched the surface of what he is” as a player, and added that “he’s growing each and every day”.

Still, Cleveland finds itself in an 0-3 hole, but the reality is that they have been highly competitive over the course of the past two games, and easily could have been 2-0. They at one point held a 20-0 lead over the Ravens in Week Two, and were in position to kick a game-winning field goal at the end of Sunday’s game, only to have their newly-signed injury-replacement kicker miss his third field goal of the day.