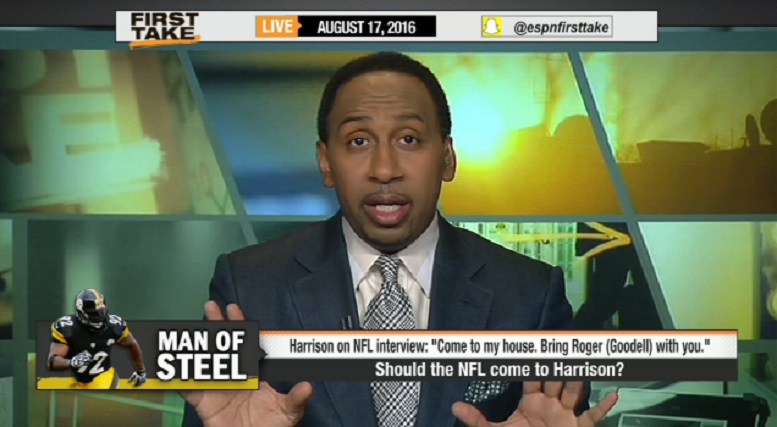 What would an off-the-field situation with the Pittsburgh Steelers be like without Stephen A. Smith of ESPN commenting on it? Probably much quieter.

After Steelers veteran linebacker James Harrison discussed his thoughts Tuesday on the letter he received from the NFL that stated he faces a possible suspension should he not meet with the league as part of their ongoing PEDS investigation, the always outspoken Smith, who claims to be a diehard Steelers fan, lambasted the veteran linebacker for his comments.

“You are not finite, you are not concrete, you are not definitive, you are not the boss,”,Smith began his rant. “And so to have the nerve, the audacity, the unmitigated gall to sit up there in front of the media, on camera, and to sit up there and to say, well you can come to my house and we can talk, but basically, I’ll be damned if I come to you. If I’m Roger Goodall, especially with the immediate aftermath of Deflate-Gate with the NFL clearly having flexed their muscle in that regard, evidently you haven’t gotten the message.

“So let me send it to you and the rest of the NFL players out there: my name is Roger Goodell, I’m the commissioner. There’s a CBA in position that gives me this power. You want to ignore it; it will be at your own peril. I would suspend James Harrison immediately just for opening his mouth to say what he said. Because even though he might be right, he’s wrong with how he’s handling it because he’s not appreciating the lack of power he truly has in this equation.”

In case you missed it, below is some of what Harrison had to say to the media on Tuesday.

Here’s what @jharrison9292 had to say about the NFL’s threat to suspend him. @timesscores: pic.twitter.com/T9gGkDwtqm

While Harrison’s response will be regarded by many as not being politically correct, the fashion in which he made his comments are exactly what we expect from him.

Harrison, as you would expect, has been leaning on the NFLPA for their guidance and support throughout this entire battle with the league. Merely bowing down to the league and commissioner Roger Goodell without first making sure he has the right not to is certainly expected. As far as Harrison asking for Goodell to come to his house to personally interview him, it is certainly a reasonable request in this situation as they should be accommodating the linebacker as part of their investigation. We know that’s ultimately not going to happen, but it’s worth requesting nonetheless.

As for Smith, perhaps he should listen to what George Atallah had to say Wednesday morning on The Dan Patrick Show about the NFLPA’s current battle with the league as it relates to what is and isn’t allowed in the CBA when it comes to them interviewing players in situations such as this current one. These players have rights and the NFLPA has no problem with Harrison, or any other players for that matter, meeting with the league as part of their PEDS investigation as long as they provide enough evidence to warrant such an action. So far, the league hasn’t provided any evidence to anyone’s knowledge and thus that’s why no interviews have taken place with the players who were named in the December undercover investigation by Al Jazeera America. Let’s not forget that those original accusations by Charles Sly were quickly recanted. Evidently Smith has.

When asked Tuesday why not get the interview over with now in order to avoid a possible suspension, Harrison was blunt in his response and perhaps Smith should pay close attention to what he said.

“If that’s the case, then somebody could come out and say James Harrison is a pedophile,” Harrison said. “They are going to suspend me, put me under investigation for being a pedophile just because somebody said it? I’m not going to answer questions for every little thing some Tom, Dick and Harry comes up with.”

I wonder if Smith would have a problem with ESPN wanting to interview him if someone very insignificant such as Sly accused him of being a pedophile or using illegal drugs. I’m willing to bet he would.