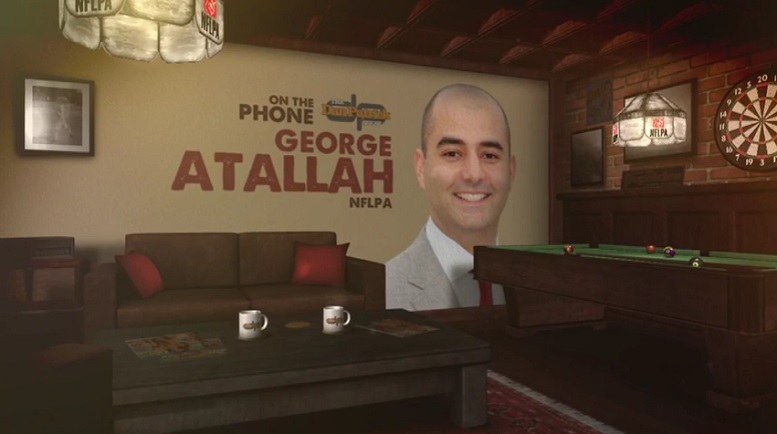 Earlier this week, Pittsburgh Steelers linebacker James Harrison received a letter from the league that stated a suspension could be forthcoming for him should he decide against interviewing with the league as part of their ongoing PEDS investigation stemming from accusations made against him and other high profile NFL players during a December documentary on Al Jazeera America. While it’s yet to be seen whether or not Harrison and the other players named in that report will ultimately cave and submit to a league interview by the Aug. 25 deadline, George Atallah, the assistant executive director of external affairs for the NFLPA, talked about the ongoing battle during a Wednesday morning interview with Ross Tucker on The Dan Patrick Show.

Atallah was first asked to respond to the letter sent that was sent to the NFLPA in addition to Harrison, Clay Matthews, Julius Peppers and Mike Neal.

“Certainly we were a little bit taken aback with the tone of that letter,” said Atallah. “Certainly there are areas that we can choose to disagree with the league. We have a lot of respect for the game, our players have a lot of respect for what they do as professionals, but I think that letter in particular crossed the line for what is professional conduct as it relates to dealing with your players and we’ve always taken the position that the NFL needs to step up and provide any evidence that they have beyond just a report that has now been recanted, or was immediately recanted, and they haven’t done that yet. So for them to make a mountain out of this molehill is unfortunate and it’s disappointing but ultimately it’s our job to represent our players and that’s what we’ll do.”

So does this whole battle come down to the league thinking they have enough credible evidence to interview the players named in that report and that the NFLPA thinks otherwise?

“I think that’s a pretty good explanation,” said Atallah “So when the report first came out, I guess it was in December, there were all these names dropped in that report and the most notable one was obviously was Peyton Manning. These four players were named in some way by a gentleman named Charlie Sly. As soon as that report was public, he came out and recanted everything and the NFL has contended that based on that sole piece of evidence, as far as we know, that the players need to submit to not only an investigation, but an interview, and all sorts of other things. We don’t believe that that is outlined in the CBA. Now ultimately, when you are in a position like we are now, we’re going to support the players and whatever they decide to do. It’s always been their choice to whether or not to proceed with the interviews or not. The union’s going to represent them. If they decide to move forward, the union will be there, if they decide to not sit down for the interview the union will be there for them as well.”

Atallah was then asked what kind of advice he’s currently giving Harrison and the other players who the league wants to interview as part of their investigation.

“Like everything else, so in any other situation that we’ve gone through over the last six or seven years. These are your rights, these are the decisions that you have to choose from and these are the consequences for each and risks for each of those decisions, said Atallah. “So, again, we’ve talked about the rights, we don’t believe the league has a right to impose the players coming in for an interview based on nothing. That is clear and we certainly don’t think that they have any right to impose discipline based on what’s out there. There is nothing out there. But obviously the risks and the consequences to them denying that, if you take the league at their word, is that they’ll be suspended indefinitely and miss games, which will obviously lead to another fight of some sort down the road. We don’t want to be in that position, I certainly hope the league doesn’t want to be in that position.”

Atallah was later asked if the NFLPA and NFL are currently in talk to try and work something out.

“We would have loved to be in discussions to try to have this thing resolved months ago,” said Atallah. “That has not been the case. This is not our first go-around with this regime and the league office. They did the same exact thing, if you remember, in Bounty [Gate]. They did the same exact thing when they violated the CBA with Ray Rice. Now clearly they’ve happened to get a couple of court cases go in their favor recently, but that doesn’t mean that the law is a good substitute for professionalism and a level of behavior that is deemed to respect the players of the National Football League. That’s just who they are, this is what the job is and we will stand up for our players no matter what.”

Atallah was then asked if there has been in precedent to warrant suspensions should Harrison and the others ultimately decide to against interviewing with the league.

“No, there is no precedent for such a thing and Saints fans know all too well what happened to their franchise,” said Atallah. “Obviously Patriots fans are still mad and I think will always be mad about the fact that Tom’s going to miss the first four games of this season and now Packers fans and Steeler fans are getting a taste of getting when you have a league office that kind of doesn’t respect the rules of engagement, this is what happens. So there isn’t a precedent for that, we certainly don’t think that this is the right thing to do, but we will do what we have to do given what the players decide here in the next couple of days.”

The NFLPA has obviously let Harrison and the other players know about the risks associated with each deciding not to interview with the league and that it’s up to each to ultimately decide whether or not to grant the request. Should the players decide against sitting down for interviews, suspensions will more than likely be handed down and at that point we could possibly see some sort of legal injunction filed by the NFLPA on the players’ behalf.

Atalla, like many others who have stayed abreast of this battle, certainly believe the NFL has overstepped their bounds when it comes to them demanding the players interview with them as part of their investigation and especially since they are unwilling to provide evidence as to why said interviews should be conducted. In reality, the fact that the league has already interviewed and exonerated retired quarterback Peyton Manning, who was also implemented in the December report, should be more than enough.

“I’ll do what I have to do. They’ll do what they have to do. We’ll make that decision when that time comes. …I just am doing what I’m advised to do (by the NFLPA). It’s the right thing to do,” Harrison said Tuesday.