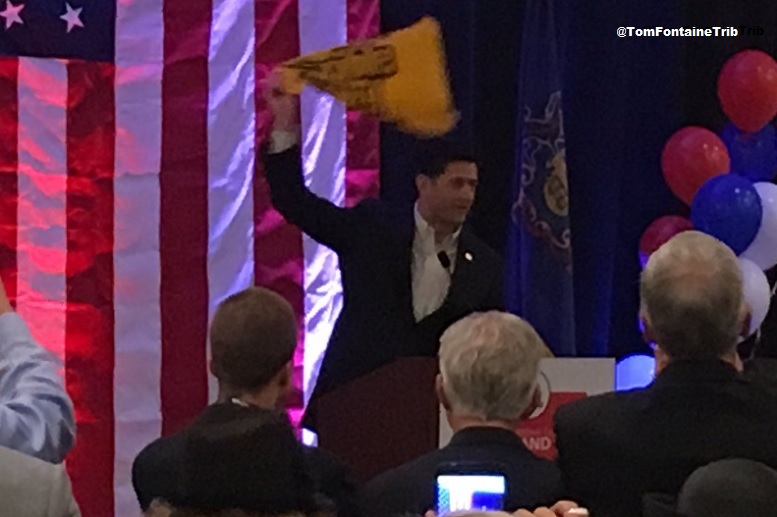 I hate mixing politics with sports and while I run the risk of the comments below this post turning into something I loathe having to moderate, I thought it was worth pointing out that House Speaker Paul Ryan is in the news on this Monday morning for waiving a Terrible Towel ahead of him speaking at the Pennsylvania GOP delegation’s breakfast at the Republican National Convention.

In case you didn’t know by now, this year’s Republican National Convention is taking place in Cleveland, Ohio. On top of that, Ryan is a fan of the Green Bay Packers as he has served as the U.S. Representative for Wisconsin’s 1st congressional district since 1999.

So, why did Ryan decide to twirl the iconic fan symbol of the Pittsburgh Steelers?

“I want to win this election so darn bad that I’m willing to do this,” Ryan said according to Tom Fontaine of the Pittsburgh Tribune-Review.

Paul Ryan waves Terrible Towel. "I want to win this election so darn bad that I'm willing to do this." #PAGOPinCLE pic.twitter.com/DWQYaVjWDV

Ryan also went on to predict a Packers-Steelers Super Bowl this year, which of course would be a rematch of Super Bowl XLV.

As you can probably imagine, Ryan’s waiving of the Terrible Towel Monday morning probably didn’t sit too well with the Ohio delegates who are in attendance in Cleveland. However, you have to give him an “A” for effort when it comes to his attempt to pander to the Pennsylvania delegates, unless, of course, some who are in attendance are fans of the Philadelphia Eagles.