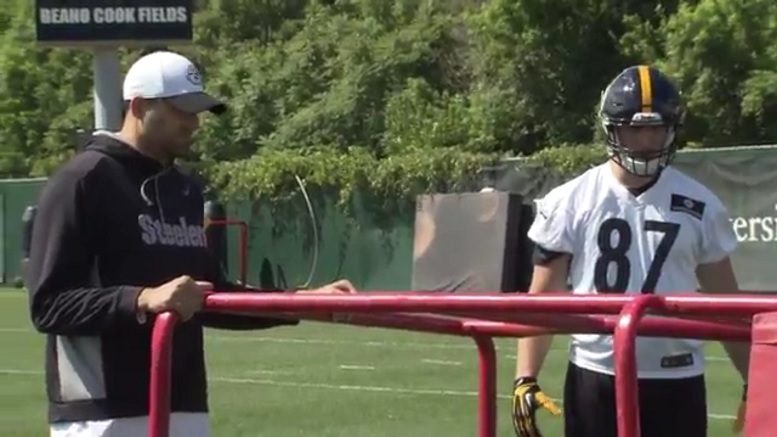 A brief look at one of the most recent players on the Pittsburgh Steelers’ roster – tight end Paul Lang.

-Appears slow getting into routes; creates very little separation
-Not an overly physical blocker and can be pushed around
-Very little experience as pass catcher (just 15 career receptions over four years)
-Limited explosiveness as a blocker in trenches; seems content just leaning on guys

Despite being a Pittsburgh native, there isn’t much to like about Paul Lang’s game as a blocking tight end coming out of the Michigan State Spartans’ pro-style offense.

At 6-foot-5, 240 pounds, Lang was used exclusively as a blocking tight end throughout his four years in East Lansing. Although he has ideal size for the tight end position, he’s a limited athlete that looks clunky running routes and working in space.

As an exclusive blocking tight end in a run-heavy offense, one would expect a guy like Lang to have great technique but that’s just not the case. He simply gets by during his four years at MSU as an adequate, suitable blocker, but not one that dominates the man across from him.

He’s slow to recognize blitzes or get across the formation to pick up a free rusher and he doesn’t have great leg drive at the point of attack, largely resulting in stalemates at the line of scrimmage.

While stalemates aren’t bad in most situations, Lang needs to get stronger in his base to drive defenders out of the hole.

The ability to do just that is there for Lang. He’s just not overly physical. To stick in the NFL long-term he’ll need to develop a mean streak and really look to bury defenders any chance he gets in the running game.

When he’s locked in as a blocker and engaged, he can ride defenders down the field, allowing him to jump out on the tape.

As a receiver there’s just not much to go off of with Lang. Minimal tape catching the football exists, considering he caught just 15 passes over his entire career. Most of the receptions were short dump-offs or simple passes over the short middle.

That being said, he did showcase good hands as a receiver.

Due to his existence as a blocking tight end and a limited receiver that struggles in space with athleticism, it’s hard to see how Lang could possibly carve out a role with the Steelers.

His blocking isn’t as good as it should be, so unless he makes a huge jump after joining the Steelers, I see no way how he possibly beats out Matt Spaeth for the blocking role on the 53-man roster.