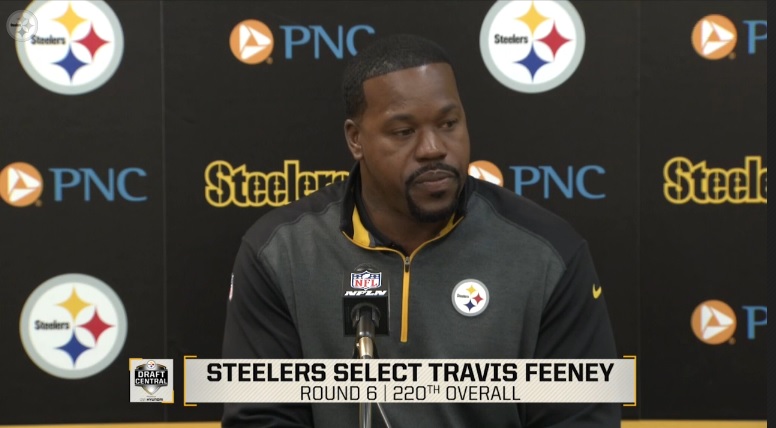 Though scouts and coaches serve the same goal, finding the best talent to improve the organization, the lens in which they evaluate can be significantly different. Scouts may lean towards potential, coaches to what a player has done. Scouts can fall in love with workouts and athletic benchmarks. Coaches look for “football players.”

That is certainly painting with a broad brush, each side dips into the other think-tank, but listening to the Pittsburgh Steelers’ coaches evaluate their draft class, you can hear some of those differences.

Following the team’s selection, Joey Porter fielded a question over Travis Feeney’s poor shuttle times. Matching his 40 time, a 4.5, there is a legitimate point of concern – was he too stiff to change directions? It was Pat Kirwan who theorized shuttle times should be a few tenths faster than a 40. But Porter shot the notion down.

The always colorful Danny Smith shrugged off Demarcus Ayers’ sluggish time, caring more about “play speed” which to Smith, Ayers has in spades.

“Forty times matter, but maybe they matter too much. There’s a play speed in this league. This kid plays fast. If I showed you the tape I put together on this kid, you wouldn’t think that that’s a matchup of the time he does.”

He continued by knocking the pre-draft process, explaining the disconnect and falsehood of what workout numbers indicate.

“I don’t know where when we started in one of the most crazy things in all of football, whether it be in high school or college or professional football, we wear about 15-pounds of pads with helmets, shoulder pads and pads and girdles and thighs and knees and then we time these guys in track shoes and their underwear. I don’t know where we went wrong with that. If I had to do it, I’d time them in full pads.”

If there’s anything I’d pay money to see, it’s Danny Smith putting 330 draft hopefuls through a workout. That’s a real taste of the NFL.

And it was Kevin Colbert, as Dave Bryan wrote about last night, who said the two most vital qualities are ones you can’t see on tape: hearts and smarts. Colbert was the one who drafted Tyler Matakevich based on the merits on being a “football player,” an ultra-productive linebacker whose frame and athleticism rated poorly, pushing hi to the bottom of the draft.

From a former player himself, center LeCharles Bentley, his bottom line evaluation circles around one element. Here’s Brandon Thorn, an O-line guru himself, passing the message along.

A lot of people ask how I evaluate offensive line play. My basis for every eval starts w/what @OLineWorld65 told me: pic.twitter.com/YX32DcmG4A

Doesn’t get much more clear-cut than that. Goes beyond the stats. The scouting report. Can I trust you to produce when I need you? That’s a very Hank Hill, firm-handshake approach, and maybe it’s corny to say. After all, we around here certainly love talking about football lexicon.

While that certainly does go in among the scouting and coaching community, there are just as many of these simple, competing thoughts. Ones that help us understand the organization’s thought process.