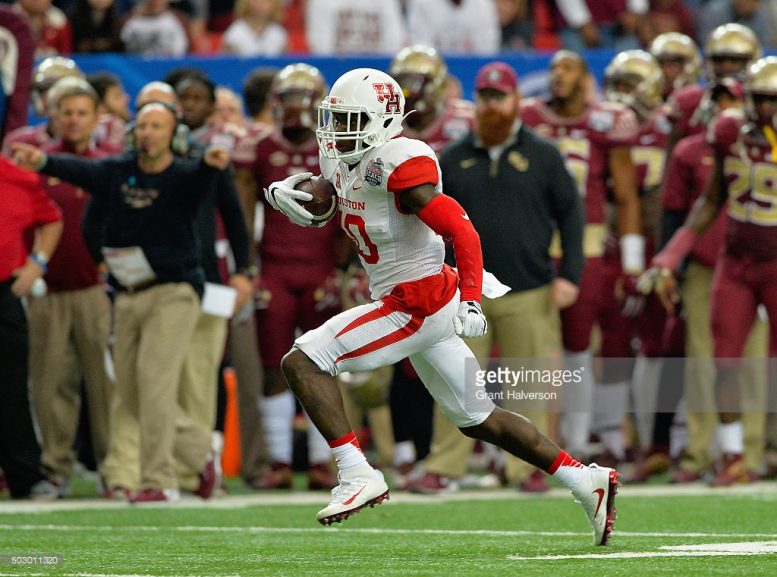 The Pittsburgh Steelers certainly let it be known to their first of two seventh-round draft picks as much as anybody else that if he is to make the 53-man roster this year, it will come through Damarcus Ayers earning a roster spot by becoming an asset as a return man. Special teams coach Danny Smith was the assistant coach brought out to discuss the selection of Ayers, whom he said was his highest-rated punt returner in this year’s draft class.

But Ayers is not simply a return man, and even if his greatest contribution throughout his entire career proves to be the ability to return punts—assuming that he ever even spends time on a 53-man roster, which is no sure bet for late-round draft picks—there can be no denying that he was a productive college wide receiver as well.

During his junior season at Houston, Ayers, whom the Steelers list at 5’11”, 190 pounds, significantly stepped up his offensive production following an offseason during which he questioned his future, which saw his step-brother murdered, and which saw his football team turn over its coaching staff.

During his first two seasons, he totaled 44 receptions for 465 yards and three receiving touchdowns, clearly showing that he was not a major part of the offense. But after recommitting himself to the program and finding a home in the slot, Ayers saw his production on offense skyrocket.

In 2015, he caught just shy of 100 passes on the year for 1222 yards and totaled eight touchdowns (six receiving, one rushing, one on a punt return). As Dave Bryan pointed out yesterday, those receptions were gathered on 132 targets, with only three incompletions coming as a result of drops.

Ayers is not the fastest, nor the tallest, nor the most explosive, nor the most athletic. There are a lot of top traits among wide receivers that you might look for that he doesn’t have in his repertoire of natural gifts. Such a fact cannot be denied.

But neither can his production, even if it is at the collegiate level, and it cannot be denied that he seemed to find himself when he was moved full-time into the slot, which is where he would function at the NFL level, provided that he ever actually managed to make a 53-man roster and participate in a game. Then again, Tyler Murphy caught a pass in the season opener last year, so you never know.

Ayers will not have the easiest time making the roster, of course, behind a strong stable of wide receivers even minus Martavis Bryant. There are already four roster locks there with Antonio Brown, Markus Wheaton, Sammie Coates, and veteran Darrius Heyward-Bey, who was recently re-signed to a three-year contract.

Behind that group, Ayers will find himself competing for a fifth, and possibly sixth roster spot at the position primarily with Eli Rogers and Shakim Phillips, two former undrafted free agents from last year, both having shown upside. Rogers in particular will likely compete with him for a role as a punt returner, which would be his ticket to a roster spot. But should Ayers make it, it’s no sure thing that he would only ever be looked at as a return man. And of course there are always practice squad slots, where Phillips spent last season.