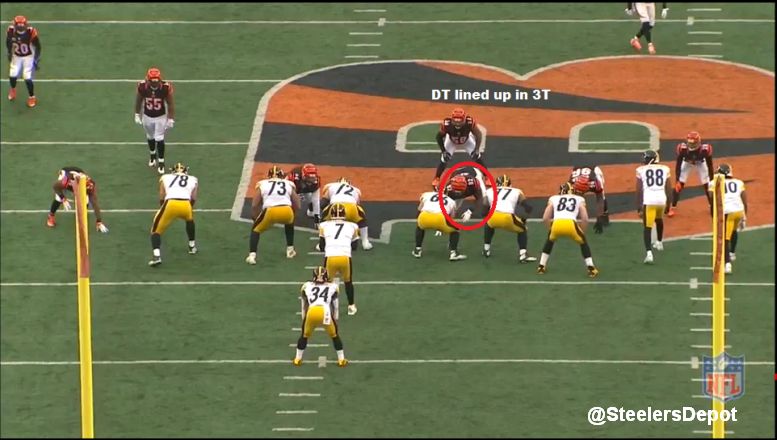 In this new series of articles one of the things I will be focusing on is the overall performance of the offensive line. In my first attempt to break down the Pittsburgh Steelers performance I have created a simple plus or minus system to gauge the play of the Steelers front five. Along with this system I will be breaking down a series of plays what went well for the Steelers and didn’t for them upfront. The Steelers ran the ball 28 times for 84 yards at three yards per carry. The big men also protected Ben very well as he was only sacked twice and hit four times on route to a 282 yard performance. This was against a very good Bengal’s defense no less. Top ten in sacks and the 2nd best defense in points per game giving up only 17.6 ppg. Viewing these plays will provide some insight into how these grades came about.

On this 2nd and 10 the Steelers ran a 25 blast. The double team on the one technique between Foster and Wallace is the key block here. They execute the double team well, as Wallace overtakes the one technique and eventually put him on his back. Foster gets to the linebacker and seals him well enough for Williams to gain a few extra yards after contact. Villanueva keeps the play side defensive end at bay long enough for Williams to get behind Foster and Wallace. The pile caused by Wallace putting his man on his back trips off the backside linebacker scraping over the top, in all actuality Wallace gets two men on the play. A good backside reach by the DeCastro and Gilbert result in the running back being first touched at about the 6 yard mark.

1st & 22 in the second quarter and the Steelers line up in an empty shotgun set. Ben takes five steps and is looking to deliver the ball when David DeCastro is pushed straight into him. Ben is able to escape and throw the ball away; but let’s look into why DeCastro had so much trouble.

First off, credit has to be given to Geno Atkins who in his own right is just one heck of a player. He plays with great leverage and is extremely quick and explosive. When DeCastro makes contact he is not balanced and his feet are not firmly set. Atkins then spins inside and DeCastro mirrors him fairly well. However DeCastro is now in a bad position and playing way too high to do with a much but lose ground. Especially against a much lower and powerful Atkins resulting in the DeCastro being pushed onto Ben’s lap.

Here we have a 1st and 10, the Steelers come out in 12 personnel, Gilbert punches down on the 3 technique and then goes to linebacker. This puts Heath Miller one on one versus defensive end Carlos Dunlap. Miller is one of the better blocking tight ends in the league but Dunlap is a difficult block for a tackle. Miller can’t get his head across Dunlap and is blown backwards, allowing Dunlap to shed the block and make the tackle. It’s hard to blame Miller that much here in my opinion he wasn’t set up for success. Calling on any TE to reach Dunlap is a questionable decision.

Next we visit another second & 10 near the end of the second quarter. The Steelers call a wide receiver screen to Martavis Bryant. The pass is a little low, however, the timing works out just about perfect. Markus Wheaton makes a good block on the cornerback and Miller wraps around and seals the edge. This allows Bryant to pick up 18 yards.

The two true key blocks are by Miller and Wheaton however I would be remiss if I didn’t make mention of the incredible effort by Cody Wallace. Wallace takes a great angle after selling pass and makes a good cut block on a linebacker. He was clearly going full speed to get to that LB. All and all it was a well-executed play and a big reason was because of the blocking in space.

2nd & 6 the Steelers come out in a shotgun set with 11 personnel. The play is a 24 T counter. This really highlights Villanueva’s athleticism there’s not many left tackles in the league who are 6’9” and can pull and lead a play. Villanueva get stunned at the point of attack but does enough to eliminate the linebacker. DeCastro washes the one technique and it opens the seam for DeAngelo Williams to take it down the middle 11 yards before any contact. This play highlights the rare athleticism/size combo that LeCharles Bentley talked about recently.

2nd & 1 with 8:55 left in the 4th quarter and the Pittsburgh Steelers dial up 24 blast between DeCastro and Gilbert. DeCastro has a tough task ahead of himself, as the defensive tackle is lined up on the outside shoulder. However, aided by a Gilbert punch at the snap DeCastro gets his head around the 3T and drives him down the line of scrimmage. This opened up a seam on an otherwise average blocked play allowing the Steelers to pick up a key first down in the 4th quarter. 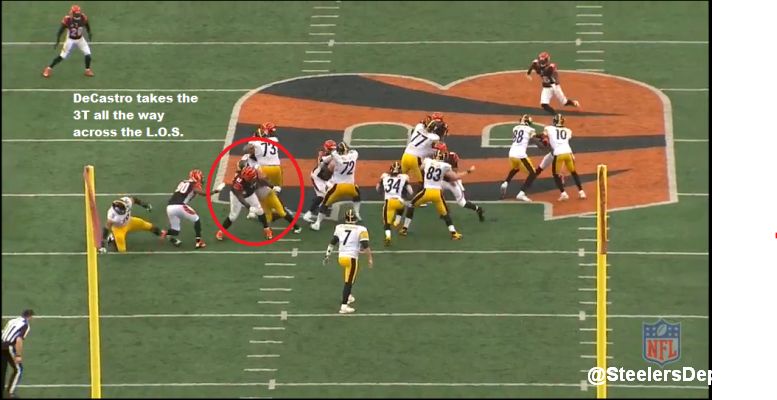 Here we have another 2nd & 8 and the Steelers go with a 22 crossbuck. Wallace and DeCastro have the key block on the one technique. DeCastro doesn’t get a great punch on the one technique and Wallace never completes a reach on him. Instead Wallace is controlled and driven down the line of scrimmage where Domata Peko makes the tackle. DeCastro false steps as the ball is snapped and then after solid contact loses his block on the linebacker. Wheaton also misses his block on the corner back limiting Williams’s options. 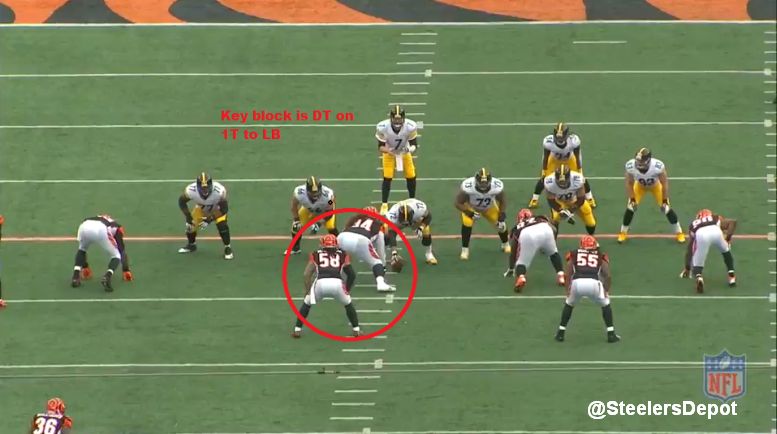 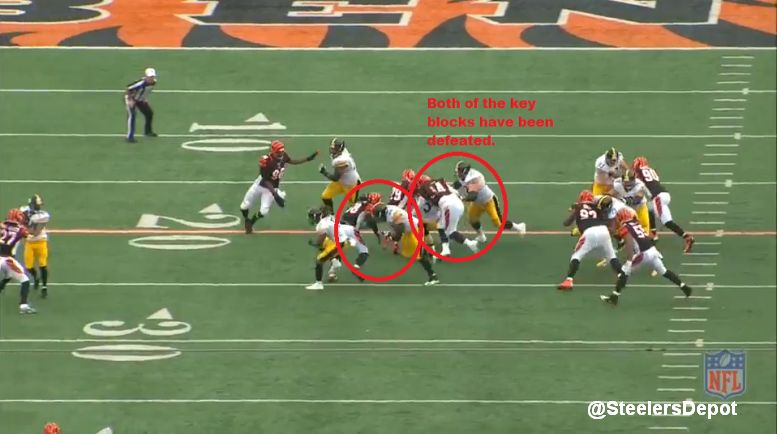 Although the offense didn’t have its biggest statistical output the offensive line and Miller played very well. The Steelers held the ball for an impressive 35:47 to the Bengals only 24:13. Ben Roethlisberger was only hit four times, two of which ended up being sacks. The rushing attack was steady but certainly not spectacular. A few of the brighter spots were certainly Heath Miller. Although I didn’t score Miller he certainly made an impact as a blocker and chipped in with some key catches in traffic. DeCastro continues to be a great asset in the run game. He routinely paved the way and led the charge with three or four yards of push. Villanueva really stands out not just in stature, but with his impressive movement skills as well.

This unit that has been somewhat patch-worked together is starting to come together. The big men up front will certainly be put to the test in their next game against the top flight defense and pass rush of the Denver Broncos.