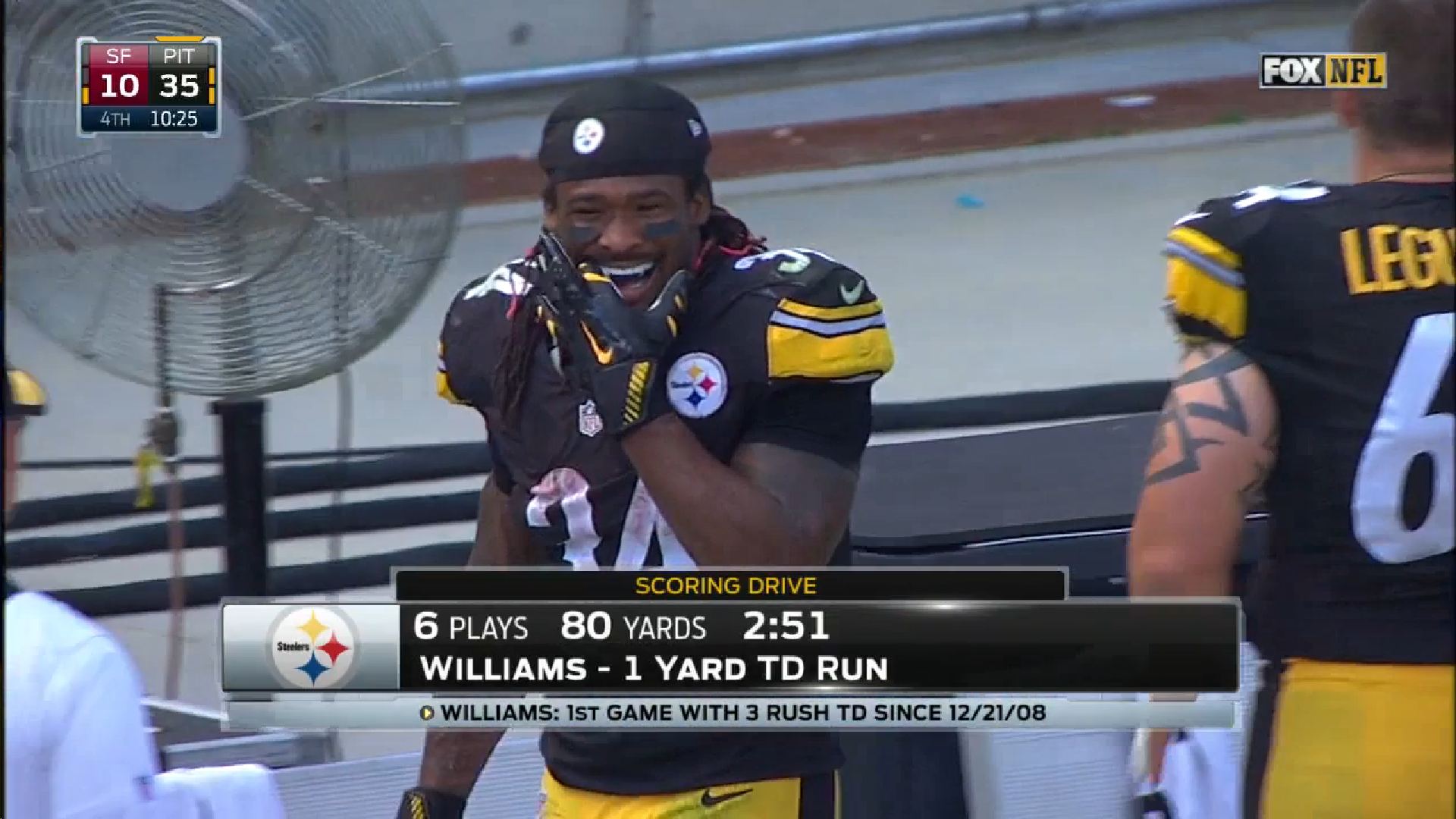 During the Pittsburgh Steelers’ loss in the season opener, the offensive play calling was exposed a bit while trying to get too cute, running a gadget pass play from a wide receiver near the red zone, and then putting a fullback in at tailback, with another fullback blocking, at the goal line.

The offense dispensed such tomfoolery in a dominating six-touchdown performance during the team’s home opener victory over the 49ers, and it produced tangible success.

Fullback/tight end Will Johnson got three carries at the goal line against the Patriots, and only managed to punch it in once, barely. The Steelers took DeAngelo Williams off the field in order to run this package, for one reason or another.

Yesterday, Todd Haley thought better of this idea, leaving Williams out there at the goal line, and he delivered, scoring on the ground three times from inside the two-yard line.

No offense to Will Johnson, but it just seems to make a lot more sense to put a running back in at tailback at the goal line, somebody who actually has a wide array of short-yardage carries both on his resume and in his repertoire. Williams certainly made that idea look like it made plenty of sense with his showing.

In the season opener, in fact, Johnson was the only other back on the roster to get a carry, four in total, for a combined seven yards. He did not see a carry yesterday—instead, the recently acquired running back Jordan Todman took the final handoff of the game, scraping off the trash heap at the line of scrimmage to pick up 11 yards, a first down, and the opportunity to end the game with a series of kneel downs.

The Steelers brought in Williams to fill his role as the starter for the first two games of the season while Le’Veon Bell serves his suspension. He is the bell cow. Give him the ball at the goal line. He is the one, after all, who got you there in the first place.

The unconventional strategy of choosing your running back to run the ball at the goal line paid dividends for the Steelers, as the offense generated half of their touchdowns through Williams’ efforts, all three of his scores having been punched in from within two yards of the goal line.

The veteran back showed nice patience and vision to hit the cut back on his first touchdown run midway through the second quarter, making the first defender miss before hitting the lane for an easy score. Williams ran by two defenders on a run blitz up the middle and off the left edge before scoring the second time. On the final score, he simply bowled his way forward, spinning through contact for a second effort trip over the goal line.

In his first game, Williams was prolific in terms of yards, adding up to 127 on 21 carries. Yesterday, he had only 77 yards on 20 carries, but three of those carries produced six points from within the two-yard line.