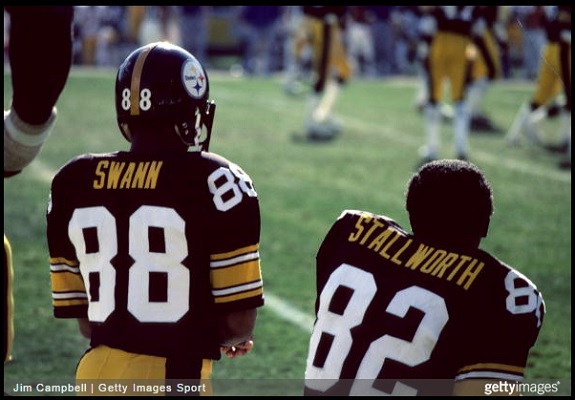 With the 2015 NFL Draft less than three weeks away, it’s hard to believe but it has been 41 years already since the famed 1974 draft class of the Pittsburgh Steelers. In that entire draft, there existed five future Hall of Famers, and Pittsburgh drafted four of them, so to say they hit a home run in it is an understatement. They were some of the integral building blocks of the franchise that went on to dynasty status in the form of their four Super Bowl championships.

In the first round out of USC, they selected a wide receiver by the name of Lynn Swann with the 21st overall pick. Enshrined in 2001, Swann was the MVP of the team’s Super Bowl X win over the Dallas Cowboys, the first wide receiver ever elected as such. His career totals 336 catches for 5,462 yards and 51 scores, and he was named to the NFL’s All-Decade Team of the 70s.

In the second round, the team grabbed one of the most tenacious and intimidating figures in NFL history in the form of Kent State middle linebacker, Jack Lambert, the heartbeat of their feared defense. Enshrined in 1990, he started his career off with a bang, winning the NFL Defensive Rookie of the Year, and despite being the youngest starter on that side of the ball, he helped set the tone for the “Steel Curtain.” He went on to win the NFL Defensive Player of the Year twice, and was an named an All-Pro eight different times.

In the fourth round, they plucked John Stallworth, a wide receiver out of Alabama A&M. Enshrined in 2002, he caught 537 passes for 8,723 yards and 63 scores, all franchise records at his time of retirement. In Super Bowl XIV, he had arguably the biggest play of his career, scoring the game-winning touchdown versus the Los Angeles Rams on a 73-yard score, and holds the SB records for career average yards-per-catch with 24.4 yards, and single game average, with 40.33.

In the fifth round, the team grabbed the late Mike Webster, a center out of the University of Wisconsin. He went on to play for 15 seasons, and 220 games, more than any other players in Steelers’ history. He was an integral cog on the offensive line, and was hailed as the strongest player on the team, a feat backed up by him winning the Ironman competition in 1980. He was named an All-Pro seven times, and the Pro Bowl nine times.

Each of those four players were key pieces to the four Super Bowl titles of the 70s, and even though it’s never been officially labeled as the best draft class ever, there doesn’t seem to be another one that could hold a candle to this one. In any draft, finding a Hall of Famer is considered very difficult, but finding four in the same one is just unheard of.

“To me there’s no question about that,” Bill Nunn, the team’s assistant director of player personnel in ’74, said when asked if it indeed is the greatest ever. “I think it has to be considered that.”

Up until his untimely death from a stroke last May, Nunn was a senior assistant for the team’s player personnel department. He’s best-known for scouting and uncovering overlooked players from mostly black colleges, and was also one of a select few to actually possess all six Super Bowl rings. This spoke of his longevity and commitment to the team.  Without him, the dynasty of the 70s may never have been.