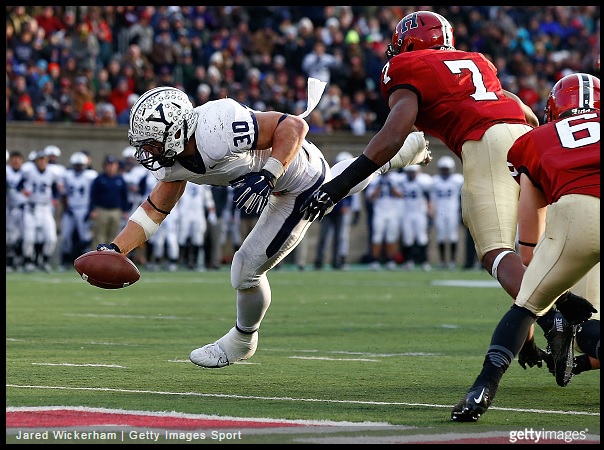 At the annual NFL event known as the combine, or “Underwear Olympics,” players are poked and prodded in a variety of ways. They range from speed drills, strength exhibitions, to also being examined in a “meat market” fashion, as they get their body measurables recorded in a crowded room full of onlooking future employers, in their underwear nonetheless. For some players, it’s an absolute embarrassment (Terrence Cody, Andre Smith), where their lack of visits to the weight room and instead to the nearest McDonald’s or Papa John’s, are evident by their atrocious body fat levels.

This is not the case for Yale running back Tyler Varga, a 5-foot-10, 222-pound specimen from Canada whose physique holds true that if the NFL doesn’t pan out, he could easily have a future in “Muscle & Fitness” magazine or an ad for Calvin Klein. With a chiseled, ripped frame apparently made from granite by the Greek Gods themselves, Varga may not be even the most in-shape member of his own family, as both his parents were bodybuilders.

“My mom is from Finland, and my dad grew up in Croatia,” he said.

His father, John, a high school quarterback, shot down offers to play in college, and instead became one of the top amateur bodybuilders in the late 80s and early 90s. His mother, Hannele Sundberg, has an impressive resume as well,  as she played on the national rugby team for Sweden, and now is an Alpine ski competitor.

“In 1990, my dad was named Mr. Eastern Canada, and my mom was once crowned Miss International. Both are intense competitors, and they have certainly passed along their knowledge to me,” Tyler said.

With such an impressive build, coupled with parents who competed in the sport, it’s hard to fathom Tyler didn’t begin taking weightlifting seriously until five years ago, where his love of sports developed.

“My life without athletics would be very difficult to imagine,” Varga said. “But of the all the sports I played, my deepest love was for football.”

He credits his passion for the game from, you guessed it, his quarterback father, John.

“I’ve seen him throw the ball 75 yards,” Varga said. “We started playing catch in our front yard when I was around five with one of those Nerf footballs. I would always tell him to throw it at me as hard as he could, even though it would knock me down.”

Eventually he signed up, and youth flag football ultimately led to tackle football, where he noted how much he loved the physicality aspect of the sport.

And here’s a very interesting tidbit about playing football in Canada-they have both fall and spring football.

“So if you think about it, some Canadian kids get twice the playing experience of someone who is brought up in the American system,” Varga said. “I had 12 seasons of football under my belt by the time I graduated from high school. I think that’s really contributed to my awareness and vision as a runner.”

That’s a boatload of experience, and he eventually landed at Yale, where this past season his 1,423 yards were the third most in school history. Possessing a 3.56 GPA in Pre-Med/Ecology & Evolutionary Biology, he was selected as captain of the North squad in the Senior Bowl, where he stood out as well, scoring two touchdowns. With the combine now under way, leading up to it has been trying to fit a puzzle together for him, with balancing classes, labs, and combine prep. So a quick pick me-up from Burger King won’t hurt, right? Wrong.

“Nutrition is an essential component of athletics that is often overlooked, and it’s something that has the potential to seriously elevate your performance if taken seriously,” he said.

“I put the same food in my body every day because it allows my body to become as efficient as possible,” he noted. “There are no secrets to this diet, but I can tell you one thing: Discipline is the key ingredient. If you want extreme outcomes, you need to take extreme measures.”

With the NFL Combine currently underway, it’s time to see how Varga stacks up against some of the competition, but does his NFL position lie at running back or fullback? If he posts a slow 40 time, fullback is a position he could get pegged as, although he possesses some of the qualities of a good ball carrier.

“Everybody always automatically tags me as a slower back because I’m big,” Varga said. “Am I like a 4.4 or 4.3 second guy in the 40-yard dash? Probably not. But I’m really good within a 10-yard box.”

He immediately conjures up images of a Peyton Hillis, Jacob Hester or Danny Woodhead-type, a Swiss Army Knife type of player who could essentially be a backup runner, as well as play fullback in a pinch. He possesses a strong lower body to blast through traffic in between the tackles, but also shows a knack for cutting on a dime and making defenders miss in space.

“My feet are pretty good, especially for someone my size. I make decisive cuts, and NFL coaches like one-cut guys. And I’ve got acceleration that can keep up with most guys,” he said.

His ability in the passing game should definitely have the attention of Pittsburgh steelers general manager Kevin Colbert and company, as he shows soft hands as well as a tenaciousness in pass protection. And his hands? They measured in at 10 5/8 inches at the combine, bigger than all the running backs and only a handful of offensive lineman. He’s currently nursing a minor ankle injury that will prevent him from running the 40, but his main goal is just to take everything in and enjoy it.

“Run fast, jump high and be an athlete,” he said. “I want to show teams that there is a lot that I can bring to the table as a member of their organization. I’m a versatile player, and I definitely feel like I can contribute on special teams. But most of all, I just want to play the game I love.”

With a need for a viable backup plan behind Le’Veon Bell, coupled with his versatility and intangibles, Varga seems tailor-made for the Steelers. A blue-collar, tough-nosed player just like the city, who doesn’t mind working for everything he’s got. A player who the front office won’t have to worry about at 2 am during the offseason. Yale has never been a football factory by any means, but Varga is one player from the small Ivy League school whose smarts and disciplinarian style should have the interest of many teams, particularly the Steelers.