Pittsburgh Steelers inside linebacker Lawrence Timmons has been a near-weekly focus of film review here, and for good reason, because it has been his consistent play against the run over the course of this season that has somewhat been the nucleus of this defense.

What has been less successful, however, has been his work in coverage. This was a significant issue during the first two games of the season, but by and large had seemed to stabilize since then, along with the rest of his game. While he turned in arguably his best game of the year rushing the passer, his lapses in the passing game—particularly on an early second quarter drive—were a source of weakness on the defense. 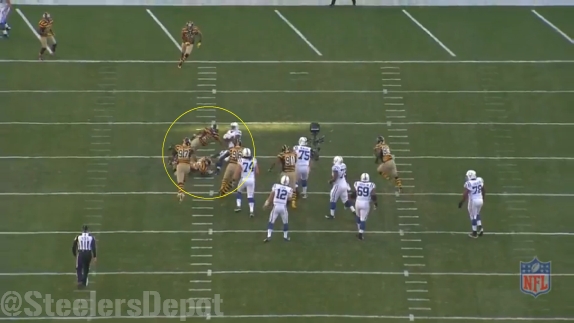 On an early first down pass on the Indianapolis Colts’ opening drive, Andrew Luck had just connected on a long reception to set himself up at the Steelers’ 20-yard line. On first down from that spot, he hit his running back, Ahmad Bradshaw, in the middle of the field, in front of both inside linebackers. Bradshaw looks as though he might have gotten past Timmons here had Ryan Shazier not been there to clean up the tackle.

Early in the second quarter, with the Colts near their own 20, they bunched three receivers on the right side, met with three in coverage. Timmons was inside on the tight end lined across from him, but the tight end took the outside route, while receiver Donte Moncrief went inside. The outside corner adapted and took the tight end, but Timmons was late to recognize Moncrief, who took the short pass and ran with it 52 yards down the field.

On the next play, however, the veteran linebacker responded with a delayed blitz through the right side B Gap. He managed to plaster Luck as he just barely had the wherewithal to throw the ball away. Unfortunately, Cortez Allen was penalized on the play and negated the forced incompletion.

But it was Timmons himself two plays later that ended the drive as he allowed Dwayne Allen, the tight end he’d failed to pass off on the previous play, beat him straight down the field for a 21-yard touchdown. The linebacker tried to jam at about the 18-yard line, thinking the route would break in one direction or the other, but the move caused him to lose a step and Allen got behind him, and his quarterback found him in the end zone.

The reality is that the vast majority of the damage done against Timmons came on those two completions on that one drive. Everything else was short, but those two plays made a lasting impact. Fortunately, so too did his pass rushes, as he got another opportunity to hammer Luck late in the first half and force an incompletion.

And that time it counted, as did his other hit on the quarterback late in the third quarter on another right side B Gap blitz, although that time Luck was able to deliver the ball for an incompletion.