Pittsburgh Steelers running back Le’Veon Bell rushed for a career-high 146 yards this past week against the Carolina Panthers, receiving the honor of FedEx Ground Player of the Week for his effort, which was capped off by an 81-yard run.

Through three weeks, the second-year back has more yards from scrimmage than any other player in the league, and he and LeGarrette Blount have the Steelers tops in the league in terms of rushing yards per game after bursting out for 265 yards on Sunday night.

With a slimmer build and a keener understanding of the offense and the game as a whole, Bell seems set on becoming a Pro Bowl player in the near future. He exhibited some of those skills on the team’s second play of the game, showing patience, and then burst, following his lead blockers for 11 yards. But he was just beginning.

Later on the opening drive, Bell had to wait for the hole to open when the Steelers tried to reach block Star Lotulelei with Cody Wallace. David DeCastro and Maurkice Pouncey eventually cleared a path, but Bell had to be patient and smart to find it, as he cut through for an eight-yard gain. 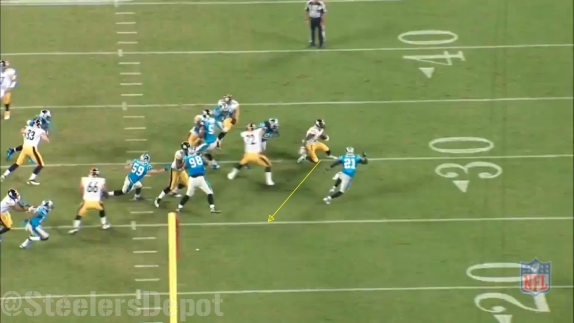 During a late first quarter drive, the Steelers closed in on the red zone after a long pass interference penalty and a pair of carries from Bell. On this second run, he turned out of the A Gap to cut it around the corner. As seen in the screen cap above, he made a sharp cut past Thomas DeCoud to secure the first down.

Although the offensive line often made it easy on Bell that night by opening big holes or providing cutback lanes, he often still managed to get the most out of most of his carries.

On one such run in the second quarter, the Steelers opened up a big hole behind the center with Pouncey blocking at the second level, but Luke Kuechly was closing in from behind a pile of bodies. When Bell came through the hole, he saw the linebacker and cut sharply away from him for a few extra yards. 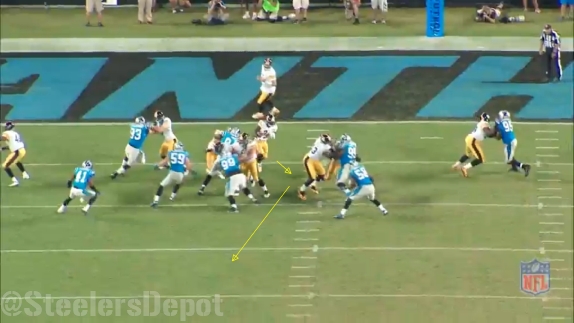 Bell’s long 81-yard run was, of course, another example of the line providing excellent blocking and opening a window of opportunity for him, but even then, he still played a part in his own success. From the handoff, he stutter-stepped to the line, hugging the right side and drawing Kuechly to go around right tackle. Then Bell hit the jets and burst through the A Gap for a career-long gain.

While he didn’t contribute much as a receiver in this game, catching only two passes for 10 yards, he did throw in a dash of pass protection for good measure.

With the Steelers backed up in their own end midway through the fourth quarter, Bell stepped up to give Wallace an assist as the defensive tackle gained penetration. It could have made a difference in converting that first down or punting deep from their own end. He continues to show that he is developing into one of the few truly complete backs in the league.