The Pittsburgh Steelers went without the services of Ramon Foster this week in their victory over the Carolina Panthers. The team rushed for 265 yards on the ground, vaulting them to tops in the league in terms of rushing yards per game, and also relinquished only one sack, and few other minor pressures.

Filling in for Foster was Cody Wallace, who started the last four games of the 2013 season at center, which is his primary position. Although he had his moments in the game, it’s fair to say that Wallace was the weak link in a strong line.

While Foster probably shouldn’t be worrying about his job security in the immediate future, at least when it comes to Wallace, however, the veteran reserve did a capable job filling in overall, making his first career start at guard.

Early on the opening drive, the Steelers asked Wallace to reach block Star Lotulelei on a run right. That’s a tough assignment, so I grade him generously on this play.

In reality, while it wasn’t pretty, he did get the job done in the end, and thanks to Le’Veon Bell’s patient running, it led to an eight-yard gain. He had to regather himself and dip under to secure the block, but once he did, Bell had a lane to cut through. 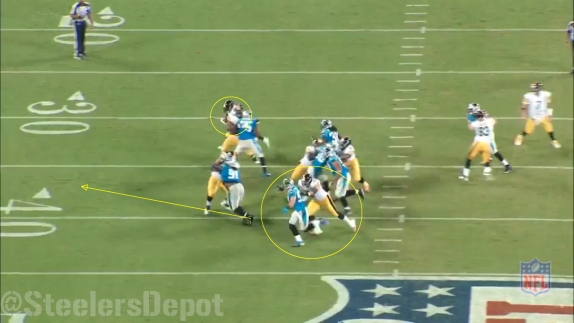 On the next play after that run, the Steelers were faced with a third and two. Wallace was tasked with picking off Luke Kuechly at the second level, but the speedy linebacker was able to avoid the block. He wound up meeting Bell head on at the right sideline for the tackle, but not before he secured the first down.

At the end of the Steelers’ opening drive, Kawaan Short was able to get pressure on the quarterback up the middle and bat the ball out of the air for an incompletion, though this was in part due to Bell pushing the end into Short and Wallace. 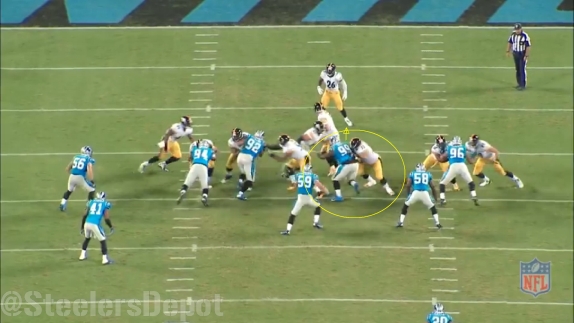 The Steelers’ second drive didn’t start off any better for Wallace, as he was beaten to the inside by the defensive tackle and allowed penetration, forcing Bell to find a cutback lane that wasn’t there on a loss of two yards. He was beaten by Short again two plays later, forcing a rushed screen pass that fell incomplete.

Late in the game, Wallace was working a combination block with Maurkice Pouncey on Lotulelei, but once Pouncey peeled off to the linebacker, the tackle easily shed him and made the stop on Bell after a short gain.

While Wallace did gain some experience at guard last year, as well as a bit in the preseason, his best position is certainly center. We’ve seen that now with more than a year’s worth of tape to sort through. Note that the Steelers started Guy Whimper—who didn’t make the team this year—at guard twice a year ago over Wallace, despite the fact that he only played tackle before joining the Steelers.

Still, it’s obvious that Wallace’s performance didn’t deter the offense from finding success on the whole, and the Panthers front line is a tough challenge. As a backup lineman, you never want to see him play unless it’s a blowout (he did in fact move to center during the last drive when Pouncey was taken out), but if he had to play, you’d rather see him at center.