1. 1st and 10, 13:21 1st. Started game at LE with the team in dime. Base blocked by the guard. Zone read with Geno Smith running away from Heyward.

5. 3rd and 7, 10:57. Hand up standing over center. T/E stunt with Brett Keisel that works, allowing Heyward to run in free. Helps chase Geno Smith down from behind and contributes to the throw away.

2. 1st and 10, 8:20. Bubble screen to RB split out wide. Recognizes it quickly and good hustle to try to get to the ball. Doesn’t make tackle but shows athleticism/effort.

8. 3rd and 1, 4:25. Heyward great job to shed, make tackle on goalline stand. Great play to do all that in such a short time in a space even more confined than usual. 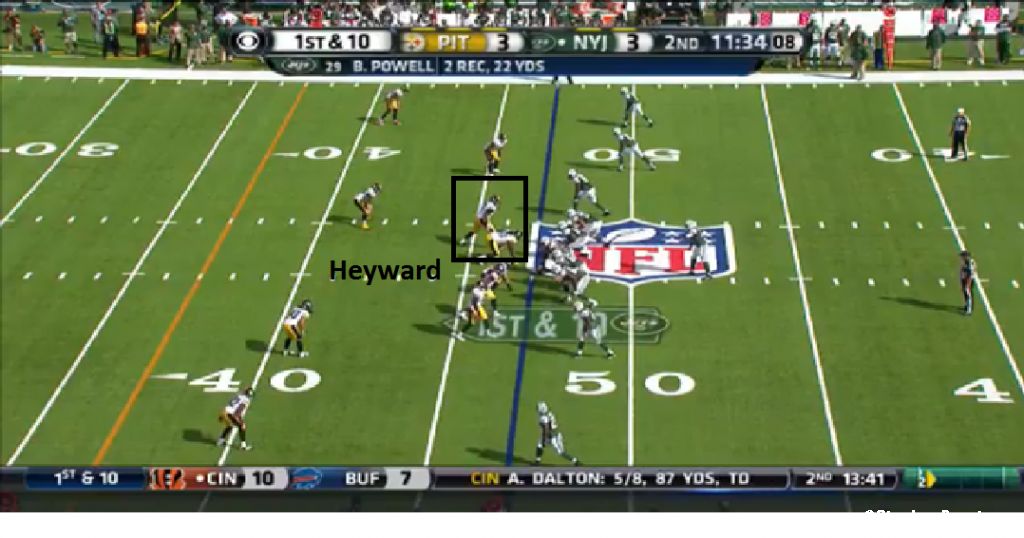 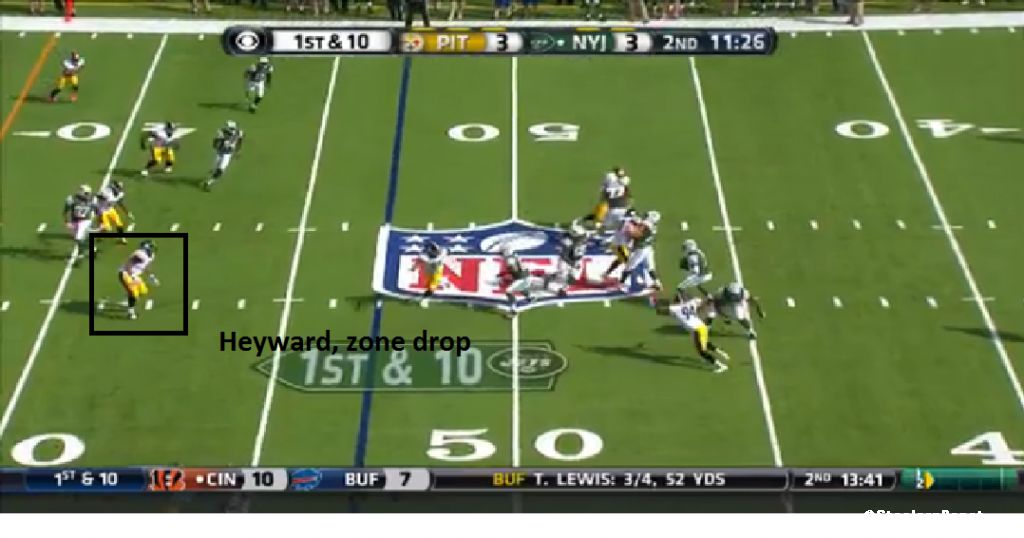 4. 3rd and 8, 10:41. Solo blocked by Nick Mangold on stunt. LaMarr Woodley, not a part of the stunt, records the sack pretty quickly so we don’t’ get to watch the stunt develop too much.

1. 1st and 10, :40 2nd. Mangold sticks initially but the DE falls off as Mike Goodson flies past to help make tackle. Sound two-gap responsibility.

3. 3rd and 4, :26. Rush. Good initial punch vs D’Brickashaw Ferguson, knocking him off balance. Left tackle is able to recover and doesn’t let himself to get completely run into the pocket but Heyward showed his power, getting the better of a solid left tackle. 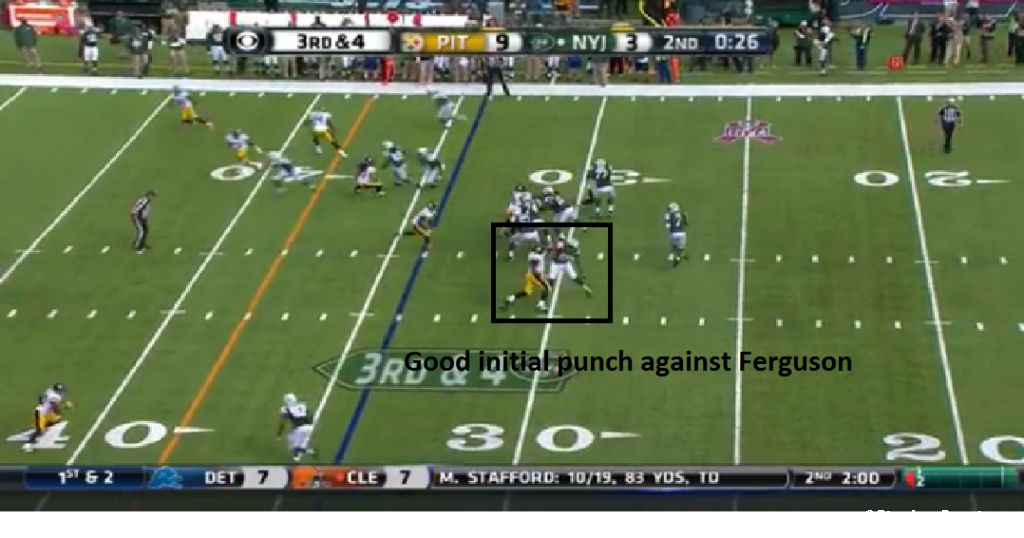 6. 1st and 10, :11. RE. Good leverage, getting under Mangold’s pads and driving him into the pocket. No pressure, however. 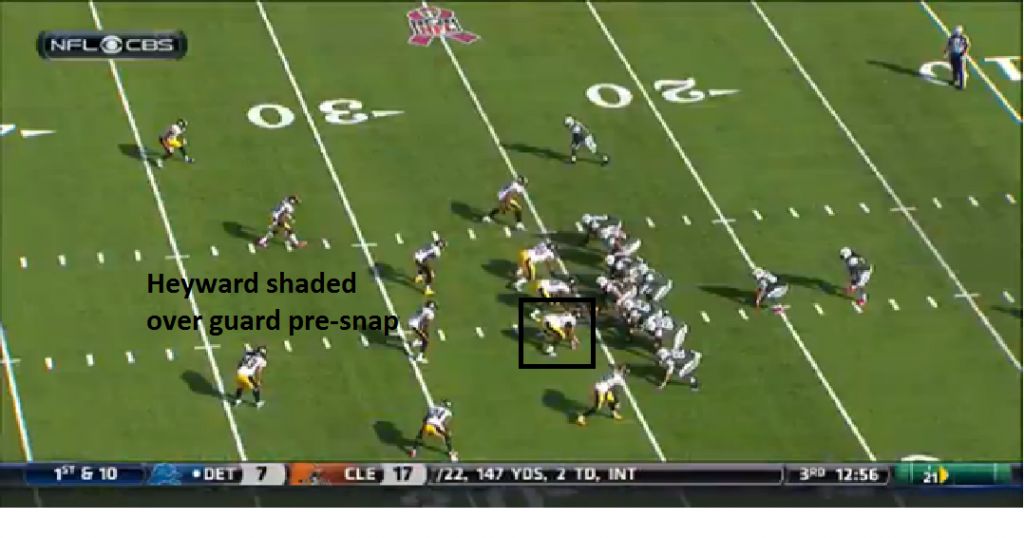 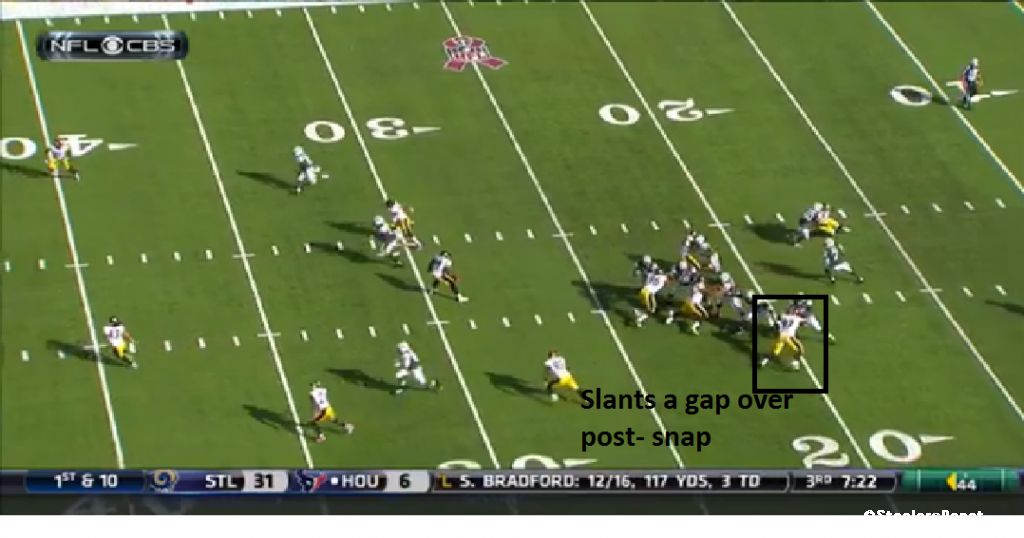 3. 1st and 10, 11:04. Run away from Heyward. Doesn’t make an impact on the play but doesn’t let himself get swallowed up and gets off block. Just gets caught up in a swarm of bodies and can’t try and make a play on this run.

7. 3rd and 3, 8:41. Hard to tell what exactly happened but loses balance off the snap and falls to the ground.

3. 3rd and 14, 4:28. Initially bull rushes Mangold but then tries to swim. Ends up falling, might have tripped over the center’s foot.

1. 1st and 10, 12:09 4th. Slow rush, almost contain principles. Smith with all day to throw. Heyward catches LT/LG napping, splitting the two and getting pressure late in the play. 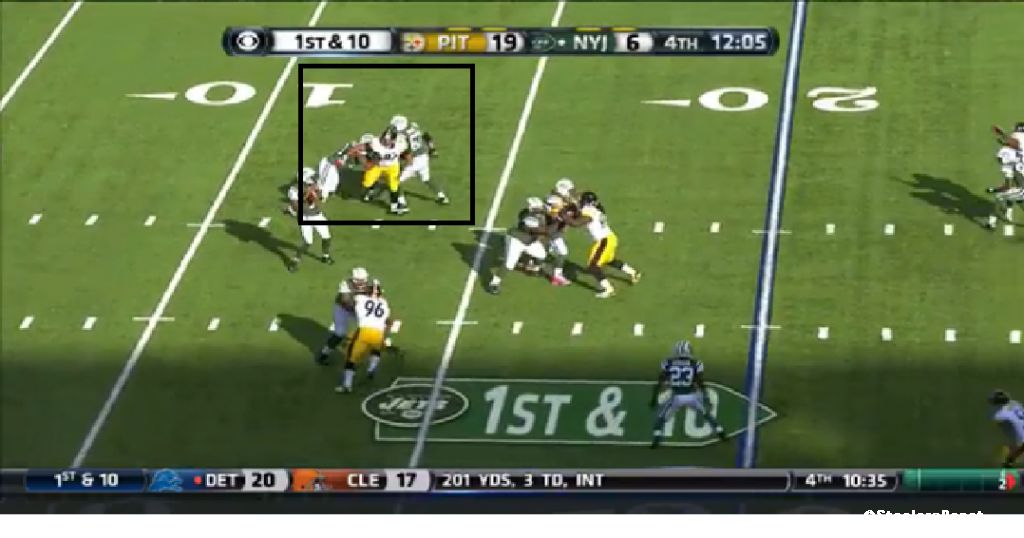 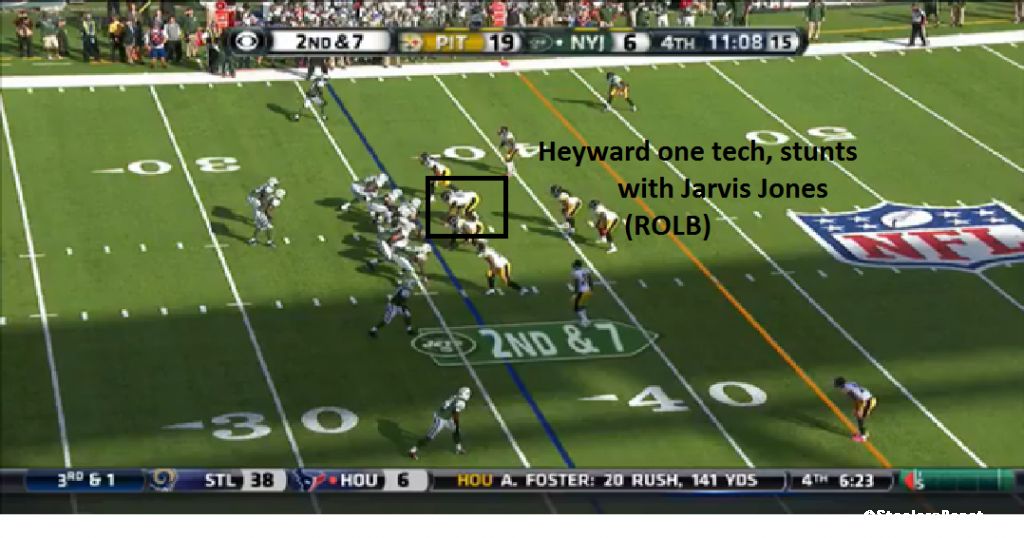 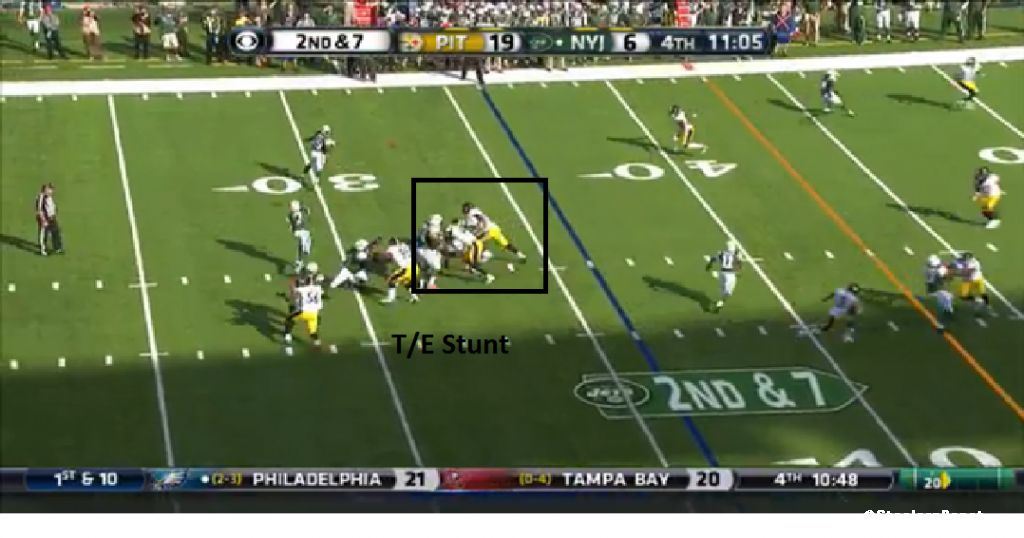 4. 1st and 10, 10:41. Lined up as one tech again though no stunt, just a straight bull rush. Again, shows good arm extension and leverage.

5. 2nd and 10, 10:38. RE, rush with hand up. Initially stymied by Winters but able to slip past but does not generate pressure.

2. 1st and 10, 7:27. Know it’s a screen so traditional OL technique can go out the window but gets the LG (away from screen) turned to the side. Winters is a rookie and Heyward schools him. 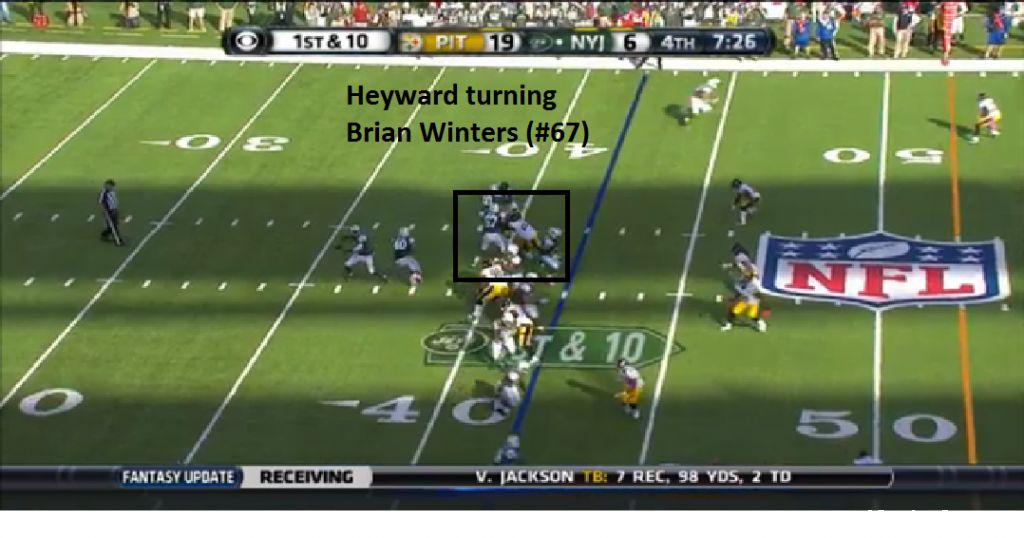 4. 2nd and 20, 7:18. Screen again. Winters lets him blow through but Heyward able to pressure Smith and force him to throw the ball into the ground.

5. 3rd and 20, 7:15. Best pass rush of his of the day. Again, schooling Brian Winters. Walks him into the pocket with a powerful bull rush. Takes Smith down right after the throw. Excellent series from #97.

He was a little less impactful than what I hoped but definitely had his moments and is clearly a better athlete and subsequently, better pass rusher than Ziggy Hood. With the team’s lack of pressure, there’s no question that is one of the reasons he was inserted into the starting lineup. Rushing with his hand up on 8/33 rushes (24%) is something Hood will never do.

And Heyward is no slouch against the run either. His stack/shed on the goalline was a potential game changer, holding the Jets to three and a great example of Heyward at his best.

Would like to see him add to his repertoire and use his quick hands more often. The swim was effective when used but want to see it more.

Although he lost a few battles towards the end of the game, I didn’t get the sense of him tiring out, one area I wanted to take a look at with him play 90% of the snaps, a big uptick from being in a rotation.