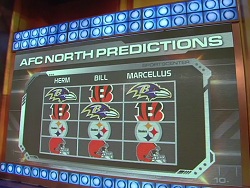 ESPN had their special 2012 AFC North preview show Tuesday and it included the division predictions of Herm Edwards, Bill Polian and Marcellus Wiley at the end of the show. Both Edwards and Wiley have the Baltimore Ravens winning the division while Polian has the Cincinnati Bengals winning it in 2012. All three had the Pittsburgh Steelers finishing third and the Cleveland Browns finishing last. Wiley did preface his pick of the Steelers finishing behind the Bengals by saying that the two will tie record wise and that the Bengals get the second spot due to tie-breakers.

Let\’s start with the Steelers change first. Their released players were Arnaz Battle, James Farrior, Chris Kemoeatu, Bryant McFadden, Aaron Smith and Hines Ward. That is quite a bit of oldness lopped off right there alone. Smith and Ward have since retired while the other names on the list are still without jobs. The contracts of William Gay, Jamon Meredith, Chris Hoke, Dennis Dixon, Anthony Madison, Mewelde Moore, Daniel Sepulveda and Max Starks were all up at the end of 2012 season. Hoke retired and only Gay and Meredith, a player that didn\’t even see a snap for the Steelers on offense last year, are the only player on that list of names that has latched on elsewhere. Rashard Mendenhall and Casey Hampton both are unlikely to be ready by the start of the regular season, but both will play at some point. The other change for the Steelers? New offensive coordinator Todd Haley replaces Bruce Arians.

Now let\’s look at the change the Ravens have had this offseason. Veteran Domonique Foxworth was the only player released and he ended the 2012 season on the injured reserve list. Ricky Williams retired. Chris Carr, Lee Evans, Ben Grubbs, Jarret Johnson, Brandon McKinney, Haruki Nakamura, Cory Redding and Tom Zbikowski were all free agents that have since signed elsewhere this off-season. Andre Gurode, Edgar Jones, Kris Wilson and Matt Lawrence were all free agents that have yet to latch on elsewhere. Other changes for the Ravens? Dean Pees was promoted from linebackers coach to defensive coordinator to replace Chuck Pagano, who left to become the head coach of the Indianapolis Colts. Former Colts head coach Jim Caldwell was hired as the new quarterbacks coach and replaces Jim Zorn. If the above is not enough for the Ravens in the change department, they will be without the services of Terrell Suggs for most of, if not all of, the regular season.

Seems like the Ravens also still have some age on their roster as well as Matt Birk will be 36 before the season starts Ed Reed will be 34 at the start of the season and Ray Lewis turned 37 earlier this month. Another starter, Bryant McKinnie, will turn 33 just after the season starts. I guess they are not old though in the eyes of the network talking heads.

This post might seem like sour grapes because the Steelers were ranked third by all three in the division across the board, but it is not. I can stomach the third place ranking if the reasoning behind it holds some sort of water. I too think the Bengals will be an improved team in 2012 that very well could compete in the division, and the Ravens and the Steelers are always front runners in the North. To merely say that the Steelers will finsish third because they had too much change when the Ravens have also had considerable change themselves is foolish and very narrow analysis. Sure the Steelers offensive line will likely consist of three new starters in Willie Colon, David DeCastro and Mike Adams, but if you think the new combination can be any worse than the last few years, you obviously have not watched many games. That change is well needed and for the better, even if it includes two top-rated rookies.

This is the kind of top notch analysis though that we have come to expect from the big E over the years though. If you watch ESPN for anything other than news and highlights, you really should consider a change yourself. A change of the channel.