NFL commissioner Roger Goodell wants defensive players to start legally destroying knees of offensive players and Pittsburgh Steelers linebacker James Harrison is now complying with what the commissioner wants. Harrison must have seen the recent seven-minute video that is narrated by NFL Vice President of Officiating Carl Johnson that instructs defensive players to lower their target in an attempt to prevent head injuries, as he hit Denver Broncos wide receiver Eric Decker right on the side of his left knee following a reception by Decker on the first play of the second quarter.

Decker caught the pass after running a crossing route through the middle of the field against zone coverage. Harrison was dropping into his area of the zone coverage on the play and hit Decker with his right shoulder on the outside of the left knee of Decker instead of taking a chance of hitting Decker too high. Upon contact you could see the left foot of Decker stick in the grass and all the force of the hit by Harrison his absorbed by the knee of Decker. 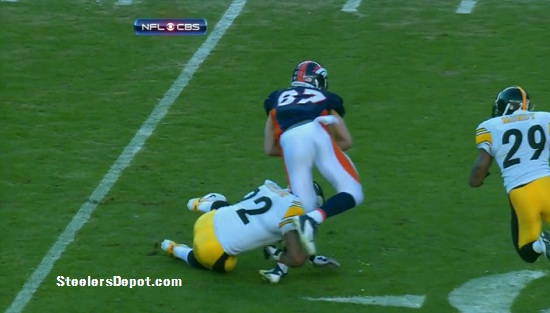 Decker laid injured on the field for several minutes before being helped off by the Broncos training staff. He eventually went to the Broncos locker-room and did not return to the game because of the injury. It was revealed on Monday that Decker suffered a MCL sprain of the knee and it will likely force him to miss the playoff game Saturday against the New England Patriots.

The hit by Harrison was textbook and probably just like Goodell drew it up in his New York office. The hit was so textbook that it will likely be included in the next video the league puts out on legal hits and I would not be surprised if you are able to buy a framed shot of the hit at the NFL Photo Store. The hit is THAT good and THAT clean.

Of course not everyone sees it that way as Mike Klis, the Broncos beat writer for The Denver Post, said in an interview Monday with 102.3 FM radio in Denver, “I really think there\’s an intent on Harrison\’s part to injure people.” Klis clearly should check with Goodell and watch the latest video put out by the league as Harrison hit Decker just as instructed. Decker did not suffer a helmet-to-helmet hit and does not have a concussion on Monday as a result.

While I have not seen any quotes from Decker since the game ended, I am willing to bet he wishes that Harrison had hit him illegally instead of legally. Had Harrison done that, Decker would likely be able to play on Saturday. He needs to understand that Goodell and the league are just looking out for his best interest, even if it means that he might miss the rest of the playoffs.