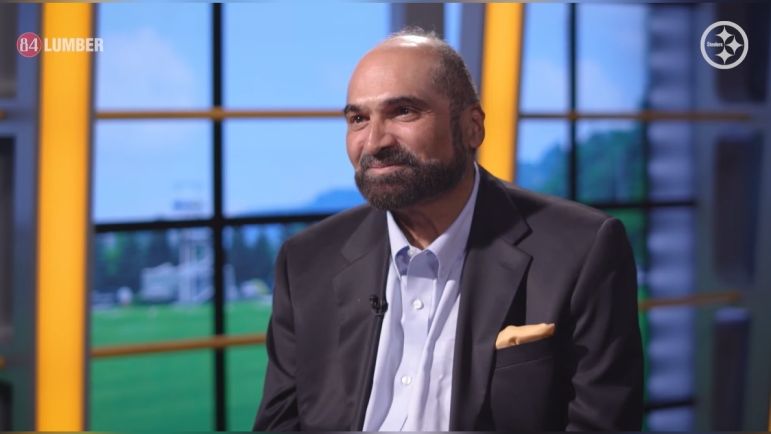 On the first episode of his Footbahlin podcast since Franco Harris’ death, Ben Roethlisberger took a few minutes to reflect on Harris’ life and friendship and what he meant to Roethlisberger. Harris died on December 20th, days before the 50th anniversary of the Immaculate Reception and before the team was set to retire his #32 during a halftime ceremony.

“It was tough to hear about his passing,” he said on the show. “Just a few days before they’re honoring him, retiring his number. The 50th anniversary of the Immaculate Reception. Raiders coming to town. I just saw him a couple weeks before. Just so much life. Always smiling, always happy. Give you a handshake and a hug.”

Roethlisberger was a Steeler from 2004 to 2021, the most games played by anyone in franchise history, and had as much exposure to Harris as any Steeler who didn’t actually play with him. Harris was always a presence in Pittsburgh and in the organization, remaining in the city suburbs even after he retired. Harris was a support line to so many players, veterans like Roethlisberger, and new faces like RB Najee Harris and TE Pat Freiermuth.

Despite Harris’ untimely death, the Steelers went on to honor him at halftime, making his #32 only the third jersey to be officially retired by the organization, joining DL Ernie Stautner’s #70 and Joe Greene’s #75. But the team honored him in the best way possible by winning, putting up 13 points just as the team did against the Raiders on that famous day in 1972.

But for Roethlisberger, what Harris did on the field paled in comparison to who Harris was as a person.

“Always life and energy and such a good person. And the honor that was being bestowed on him was so well-deserved. Not just for that play he made but for everything he did. What it is to be a Steeler. He is, he’s that. He’s a teammate. A loyal brother bleeds black and gold…I know he was there in spirit, his family was there, his wife and his son. But Steelers’ Nation, that’s a big blow that hit us.

Pittsburgh handled his death in an expectedly classy way. The halftime ceremony was touching with a great video tribute (that NFL Network opted against showing) with the entire organization wearing his number before the game. A public viewing the following Tuesday where fans could pay their last respects. Hundreds if not thousands of fans stood in line in the cold to say goodbye.

As Roethlisberger said, the bond in Pittsburgh runs decades deep. It’s a college-town feel with alumni regularly sticking around the franchise whether it’s Joe Green remaining close to the team, droves of ex-players attending training camp, or Harris to text and teach Najee Harris on how to be a great running back. Franco embodied what it meant to be a Steeler, on and off the field, personally and professionally, and few if any players have had the impact on the franchise as he did.

Harris’ death was difficult news in a year that’s had too much of that. Like the rest of Steelers’ Nation, Roethlisberger was impacted.”

“The relationship I had with him was truly a friend. It’s tough. It’s really tough. I’m glad the Steelers pulled it out and they won it the way they did.”

Check out the latest episode of Footbahlin by clicking below.