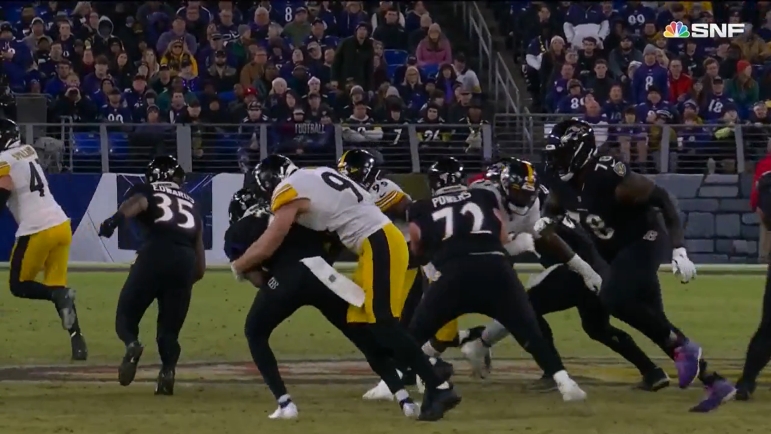 It was a great run. But now it’s over.

The Pittsburgh Steelers’ streak of five straight seasons with 50+ sacks is donzo. In hindsight, it’s not a surprise, and without T.J. Watt for half the season, it was expected. Still, it hurts a little bit to say goodbye.

There was history on the line. No team had ever gone six seasons in a row with 50+ sacks and it felt like Pittsburgh had a real shot to be the first. The pass rush looked healthy with T.J. Watt coming off a record campaign, Alex Highsmith making strides, and Larry Ogunjobi offering pass rush juice to replace Stephon Tuitt.

Week One got off to an incredible start. Seven sacks to beat the Cincinnati Bengals in Week One. But the win, and the sacks, came at a cost. A partially torn pec for T.J. Watt who wouldn’t return until after the bye. And even once he did, he battled rib injuries and the rust of missing half a season.

Without Watt, the pass rush tanked. Zero sacks against the New England Patriots the following week, another goose egg in Week Five versus the Buffalo Bills. Pittsburgh’s pass rush went M.I.A and with a secondary dealing with injuries, coaches opted against blitzing more. They kept the same strategy, rush four, drop seven, but with depleted personnel, the plan didn’t work. By their Week 9 bye, Pittsburgh had just 15 total sacks, nearly half of them coming in that opener.

Things got better but not dramatically so once Watt returned. Two sacks in Week 10 against New Orleans, another pair the following game versus Cincinnati. There were four in Week 15 versus Carolina but entering the final week, Pittsburgh still was near the bottom of the league.

Then came the Cleveland Browns.

Something about playing Cleveland in a regular season finale is just good for the soul and better for Pittsburgh’s pass rush. A seven sack performance on Deshaun Watson, who could’ve been taken down double-digits had he not been able to routinely escape pressure and step out of sacks. Pittsburgh ran up their score by game’s end, pinning their ears back, sacking Watson a whopping four times on the Browns’ final drive, including the last play of the game and the season. Alex Highsmith ended the year with 14.5 sacks, a career-high, while Cam Heyward picked up 10.5 sacks, his second-straight year in double-digits.

But they all count the same and Pittsburgh finished the year with a respectable-looking 40 sacks, tied for 14th in the league. It remains a big step back off the Steelers’ pace, they tied or outright held the sack league every year since 2017. What pours salt into the wound is this year’s leader, the cross-state Philadelphia Eagles who not only eclipsed the 60-sack mark, a number I had been wishing for the Steelers to hit, but they ended the year with an incredible 70 sacks, something no team has done since the 1989 Minnesota Vikings.

These are all just stats and streaks and it doesn’t take away from the solid play the Steelers’ defense put in down the stretch. With a healthy T.J. Watt (hopefully anyway, his ailments have begun to pile up), the Steelers should again contend for the league lead in 2023. But as we close the book on the season, we say goodbye to one heck of a streak. One they hopefully start up again next season.