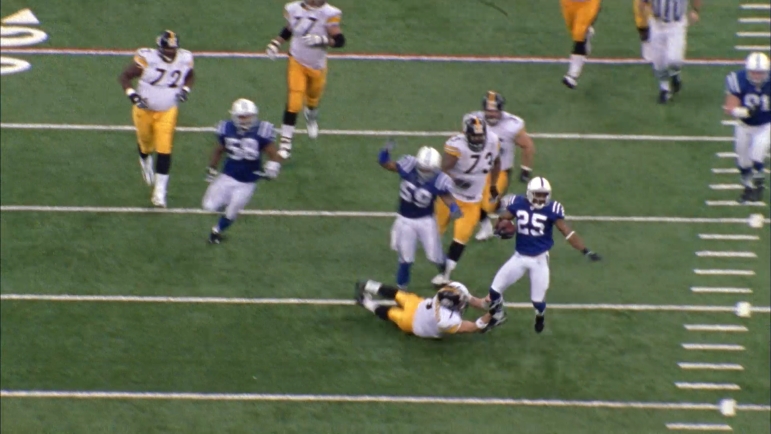 The Baltimore Ravens quite arguably lost on Sunday night in the wildcard round against the Cincinnati Bengals principally because of one single play. It’s ordinarily frowned upon to boil a game down to one play, but when that play creates a 14-point swing, in a game decided by seven points, the argument gets a bit stronger.

The Ravens were facing 3rd and goal from the one-yard line with 12 minutes to play in the fourth quarter in a tied 17-17 ball game. Quarterback Tyler Huntley attempted to dive over the line to get into the end zone, but he was met forcefully by linebacker Logan Wilson, who spiked the ball loose. Sam Hubbard recovered and ran it back 98 yards for the game-winning touchdown.

Sam Hubbard takes the fumble 98 yards for the TD ‼️

Sound familiar? Fortunately, not entirely. The Pittsburgh Steelers were in a somewhat similar situation back in 2005, only it was much later in the game. Up 21-18, they had the ball on the Indianapolis Colts’ 2 when they gave the ball to Jerome Bettis. Gary Brackett jarred the ball loose and Nick Harper scooped it up.

One wonders—and many have—if things would have been different if Harper hadn’t been accidentally stabbed by his wife in the leg earlier that week. Whether that was a factor or not, quarterback Ben Roethlisberger saved the Steelers’ bacon by making an open-field tackle to keep him from running it back. It was even named the No. 57-greatest play in NFL history.

Whenever the @Steelers play the Colts, Ben Roethlisberger’s game-saving tackle in the 2005 Playoffs always comes to mind. pic.twitter.com/oBpKnxTxJr

“Thank God we had Ben behind him, thank God he wasn’t doing the quarterback sneak”, former head coach Bill Cowher told Gerry Dulac of the Pittsburgh Post-Gazette yesterday, the many actors involved in the play having been reminded of it due to the Huntley play. “He had so many great throws, but that was the one play in that whole run we had that was the defining moment”.

Kicker Mike Vanderjagt would go on to miss a potential game-tying field goal from 46 yards out after cornerback Bryant McFadden made multiple plays on the ball to keep Peyton Manning and Reggie Wayne out of the end zone. The Steelers moved on to the AFC championship game and then were victorious over the Seattle Seahawks in Super Bowl XL.

None of that would have happened had Roethlisberger been unable to make that tackle. Granted, there still would have been plenty of time left for the Ravens and Bengals had Hubbard been caught (and Mark Andrews made a valiant effort trying to do just that), but I’m sure to everyone watching it felt like the end of the game.

Baltimore only managed one first down on its next two possessions after the fumble, never crossing their own 40, though the Bengals proved similarly unable to move the ball. The Ravens had one last chance at the end of the game from Cincinnati’s 27, but the final pass into the end zone was defended by former Steeler Mike Hilton and fell incomplete.