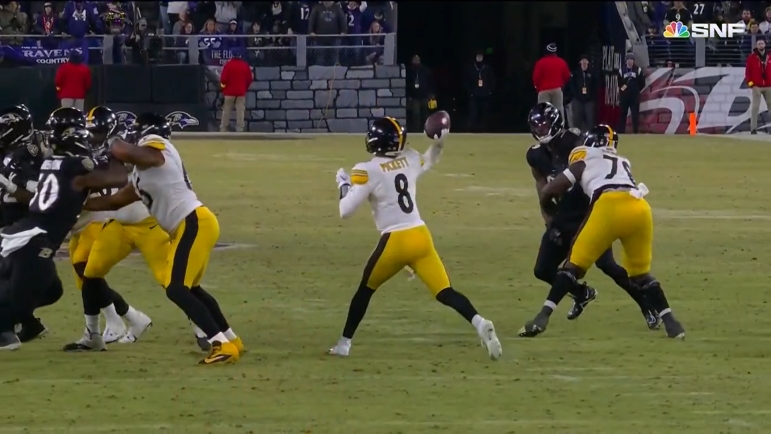 Winners and losers from the Pittsburgh Steelers 16-13 win against the Baltimore Ravens Sunday night.

Kenny Pickett – I thought long and hard if Kenny Pickett should be on this list. Nah, just kidding. I know you have anxiously been waiting for his name to be on this list. This is the performance that gets you there. Pickett was great tonight. Eyes downfield, accurate throws on the run, big time plays on third down, making good decisions against a tough Ravens’ defense.

And the touchdown. What. A. Play. Under pressure, running left, and a laser to Harris against LB Roquan Smith. What a drive. What a game. Tonight, a star was born.

Robert Spillane – Spillane was one of the best defenders on the field tonight and showed why the Steelers have turned to him down the stretch. Health has played a role, Myles Jack can’t shake a groin injury, but Spillane is trusted and smart and Devin Bush barely saw the field in the first half. Spillane made plays against the run, sniffed out screens, and was consistently solid.

O-Line – Overall, the line was solid tonight. It helped the Ravens were without their stud DL Calais Campbell out but Pittsburgh’s run game was far better in the rematch. Line won at the point of attack and generated movement. In pass pro, they held up well and gave Pickett time.

Jaylen Warren/Najee Harris – Two solid performances by those two guys tonight. Ran tough, ran hard, got downhill. Warren on a 31-yard run off left edge early, making big third down grabs. Harris running as tough as you’ll see him. Harris went over 100 yards for the first time all season while Warren nearly matched that mark. Proud of their performances tonight embodying what Steelers/Ravens are all about.

Pressley Harvin – A lone bright spot on special teams. No issues with the third-string upback in the game. Harvin’s first punt went for 48 yards but his second was the prettiest, a 51-yarder with great placement along the right sideline that Miles Boykin did well to make the stop to curtail net, 49 yards by play’s end. Harvin also secured a high snap from LS Christian Kuntz on a field goal. Kuntz hasn’t had a strong year.

Minkah Fitzpatrick – For being the closer. Like always. The game-winning pick, his 6th of the year. A career-high for him and a sealer tonight.

Refs – I’m not one to harp on the refs. Do my best to avoid even mentioning them. But the unnecessary roughness call on Cam Heyward at the end of the first half was a brutal one. Heyward didn’t do anything wrong and the refs should’ve let it go. It’s Steelers/Ravens. It gets a little chippy. Let the players play.

Special teams – Los of issues. Penalties on punts, two of them tonight. A hold on Minkah Fitzpatrick and Elijah Riley. Field-flipping moments. One that had the Ravens backed up ended up causing the Steelers to start at their own 25, not benefiting from what should’ve been good positioning. The Riley hold backed Pittsburgh up into the shadows of their own goal line in the second half. Stuff you can’t get away with when there’s little margin for error in low-scoring affairs.

But Boswell missed from 48 yards and the team allowed a long kick return to Justice Hill after a field goal made it 13-9. Ugly stuff from Danny Smith’s crew.

Chris Boswell – More specifically on Boswell here. Boswell did have a make from 50 yards out. Really, all his kicks should be from that distance. He’s far better from deep than he is 40-49, missing wide right from 48 yards in the first half. That’s not an easy kick but one he has to make in close games when Justin Tucker is on the other side. With injuries, misses, and blocks, it’s not been a good year for him.

Tackling – Specifically, on RB J.K. Dobbins. Tackling was the one part of run defense that wasn’t an issue in Week 14. But it was tonight. Pretty sloppy overall as Dobbins broke tackles. Didn’t always turn into big runs but they also turned stuffs/losses into positive gains. Those can be just as back-breaking. Disappointing, to say the least.

Chukwuma Okorafor – While the line as a whole did well, Okorafor seemed to be the weak link. Especially in pass protection. Issues with Justin Houston on the right side and he struggled to seal/down block in the run game. He’s an average player through and through.