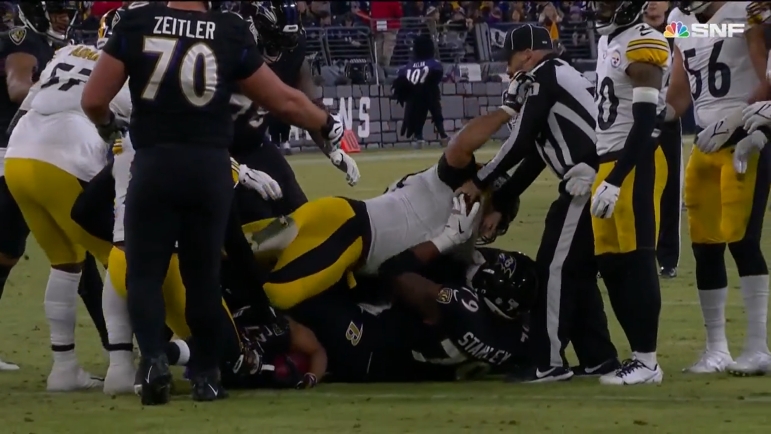 We’ll see what the second half holds, but with the way things are currently trending, the story of the game may end up being the unnecessary roughness penalty called against the Pittsburgh Steelers on defensive lineman Cameron Heyward at the end of the first half.

The penalty gave the Ravens a first down after a third-down stop that would have forced them to attempt a field goal, and they managed to score a touchdown on the following play on a pass from quarterback Tyler Huntley to tight end Isaiah Likely.

That score gave the Ravens a 10-3 lead after it looked like they would take no more than a 6-3 lead into the second half. Making matters worse was the fact that Baltimore opened the second half with the football.

Heyward was livid about the penalty, both after it was called and after the touchdown was allowed, and the prevailing opinion is that it was a bad call. It raised tempers, certainly, on the Steelers’ sideline, and there was shown a brief moment in which Heyward and safety Minkah Fitzpatrick got into a shouting match once they got back to the sidelines.

We don’t know what was said, of course, and at this rate I doubt anybody is going to talk about it after the game beyond generic platitudes about the heat of the moment and emotions coming out. In fall fairness, that’s undoubtedly all it was to begin with.

But the context is understandable. The Steelers’ season is hanging in the balance. They got the help that they needed before the game, and the defense recognizes that it falls on its own shoulders to keep the score down. The penalty was a four-point swing at least in a game between two teams that is often decided by that or less.

Tempers are going to flare when something like that happens. Everybody has to understand that priority number one is doing nothing that hurts the team, and regardless of what might have happened, Heyward’s penalty hurt the Steelers badly.

But the two should-be All-Pros were also seen sitting together on the bench together as they often do, so there shouldn’t be any concerns about some lingering issues. The moment passed. And the game’s still going. The Steelers can make it irrelevant.

But they’ve got work to do. They have at least a touchdown and a field goal to make up for, currently down 13-3, but the offense is going to have to step up unless the defense can get into the end zone on their own. This is going to take a full-team effort, complementary football as head coach Mike Tomlin says, to keep the season alive.