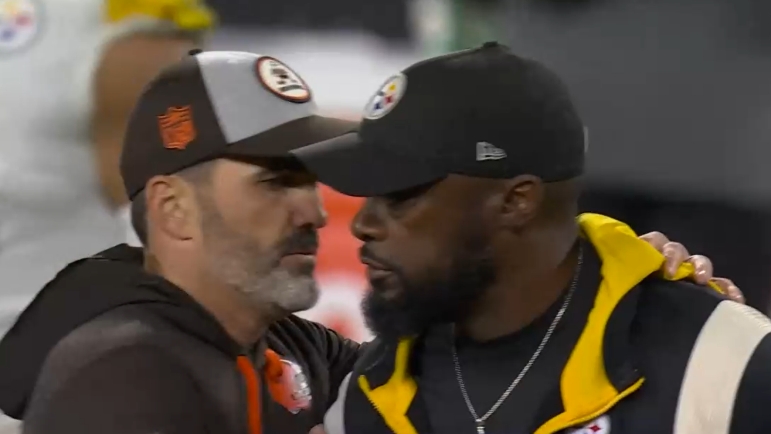 The Pittsburgh Steelers have one more game left to play. Yet it will take up to three games to decide their playoff fate, all scheduled to kick off at 1 p.m. on Sunday afternoon. In order to reach the postseason, they will need the New England Patriots to lose and the Miami Dolphins to lose or tie—while also beating the Cleveland Browns.

The Browns have already been mathematically eliminated from postseason contention, but they are still looking to finish out the season strong. They beat the Washington Commanders on Sunday and are hoping to end the year on a winning streak and a season sweep of Pittsburgh. But knocking their division rival out of the playoffs “is not our focus”, head coach Kevin Stefanski said yesterday.

“We understand those type of things, but this is a division game and it is a rivalry game”, he added, via the team’s website. “We have a ton of respect for that organization, those coaches and those players. We get to lace them up Sunday – don’t know what time yet – but we get to compete for 60 minutes, and we are excited about that”.

They do have reasons to want to go all out. After all, they made a seismic investment in the quarterback position this offseason in Deshaun Watson. He spent most of the year serving a suspension, so they only have a small window of opportunity to get to know him on the field.

Watson had by far his best game as a Brown on Sunday, completing nine of 18 passes for 169 yards and three touchdowns with no interceptions. They are 3-2 in the five games he’s started, though he has only gone 80-for-141 passing for 872 yards with five touchdowns to three interceptions in that span. He also has one rushing touchdown.

Like Steelers head coach Mike Tomlin’s non-losing season streak, however, just because he says he doesn’t talk about it or focus on it doesn’t mean that his players don’t or won’t. the Browns’ star pass rusher, Myles Garrett, talked on the same day about relishing the opportunity to potentially be the reason the Steelers miss the playoffs.

“We’d love to do that”, he said of playing spoiler. “We consider them our rivals. Divisionally, if we can’t make it, we’re definitely going to make sure those guys can’t. We’re going to do everything in our power. Much respect to them for being in that position, but we live for times like this”.

We know what is at stake, and we are excited about it.”

Not that the Steelers need any added motivation to win on Sunday, but I suppose this would qualify as what people like to call ‘bulletin board material’. I also can’t help but find it amusing that Garrett said they live for times like this, ‘this’ being an opportunity to force another team to miss the playoffs alongside them.

Although it must be said that the Browns have won a playoff game much more recently—and over the Steelers—than has Pittsburgh.