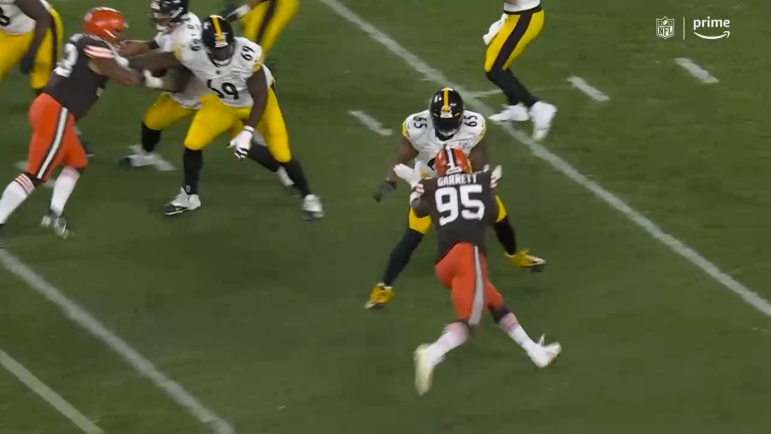 After having everything go their way in Week 17 that needed to occur, the Pittsburgh Steelers find themselves alive in the AFC playoff race entering Week 18 against the AFC North rival Cleveland Browns.

Sitting at 8-8 on the season, the Steelers need a win over the Browns at Acrisure Stadium on Sunday, as well the Buffalo Bills and New York Jets to win or tie their games in Week 18 in order to secure an AFC playoff spot.

For Browns star defensive end Myles Garrett, he and his teammates are looking to play spoiler at this point in the season against the Steelers.

“We’d love to do that,” Garrett said to reporters following the Browns’ win over Washington on Sunday, via Ben Axelrod of WKYC. “We consider them our rivals. Divisionally, if we can’t make it, we’re definitely going to make sure those guys can’t. We’re going to do everything in our power. Much respect to them for being in that position, but we live for times like this.”

The Browns certainly would love to play spoiler against the Steelers, as it is all that Cleveland has left to play for this season, having already been eliminated from playoff contention in Week 16 after losing to the New Orleans Saints at home.

Garrett just can’t seem to stay out of his own way or keep his foot out of his mouth though. While he is stating the obvious with wanting to play spoiler against the rival Steelers, him stating that the Browns “live for times like this” isn’t the best look overall.

Myles Garrett: We’d love to keep Steelers out of the playoffs https://t.co/p73wHt4Dab via PFT #Steelers pic.twitter.com/Z10jbfmlR8

That said, maybe the Browns do live for times like this, which is playing meaningless football the last two weeks of the season and simply trying to play the role of spoiler, rather than actually competing for something meaningful.

Not only do the Steelers have a playoff spot to play for on Sunday, they also have a chance to extend Mike Tomlin’s non-losing seasons streak to 16 seasons with a win, which is an impressive feat in its own right. That last two times the Steelers have faced off against the Browns needing a win to avoid a losing season, the Steelers emerged victorious in 2012 and 2013, winning by scores of 24-10 and 20-7 those seasons.

Garrett wasn’t around for those matchups, but the Steelers historically come through against the Browns in must-win spots, though Cleveland did defeat the Steelers in the 2020 playoffs in the Wild Card round.

Even with nothing to play for from Cleveland’s perspective, Garrett and his teammates remain focused on ending the Steelers season on a low note, if possible.

“It doesn’t matter our chances. We know they have some chances left, so we’re going to try to erase those if we can,” Garrett added, according to WKYC.

We’ll see how it plays out on Sunday, but all Garrett did was just add fuel to the fire. Someday, Garrett will learn that some things are best left unsaid, even if they are obvious.

Funny enough, Garrett said he wanted to send Ben Roethlisberger out with an L last season, too. And, well, things didn’t exactly go as planned for Garrett. A lot of talk, very little bite at times from the All-Pro.