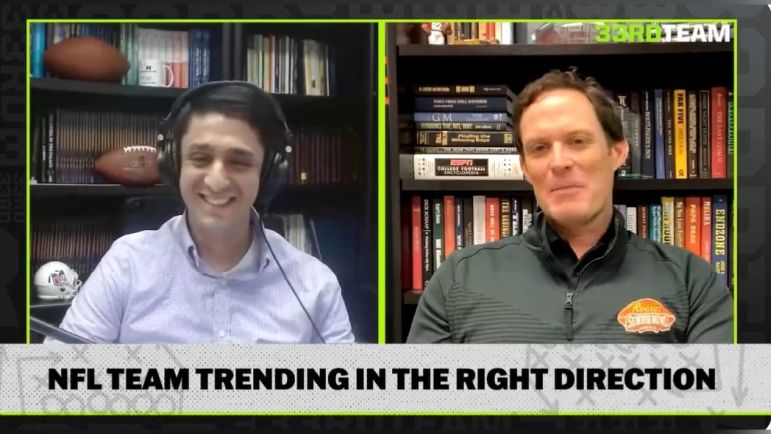 This time a year ago, Kenny Pickett was taking the first steps of his NFL Draft process. Invited to the 2022 Senior Bowl, we wrote one year ago if Pickett could remain in Pittsburgh. He did, the Steelers making him the 20th pick of last year’s draft, and Senior Bowl Director Jim Nagy believes the Steelers’ future is bright.

Sitting down with Ari Meirov, Nagy was asked what teams who missed the playoffs this season could return next year.

“The Pittsburgh Steelers…they fought back,” Nagy said. “They were kind of like Detroit. They got off to a rough start but they fought back. To see the growth Kenny Pickett made, a couple late fourth quarter comebacks late in the season to win games, I think they know he’s the guy. Now they’ve identified him, the hard part is done. You’ve got a quarterback you feel good about. Now that Omar Khan in his first draft with Andy Weidl there, add some pieces around Kenny, and now maybe they’re cooking and they’re making a move to the playoffs next year.”

Which non-playoff teams could make a jump next season similar to the Jaguars and Giants from this past year…?

Pickett’s progression alone gives the Steelers’ hope next year. The success of the franchise hinges on his development, the team’s first 1st round quarterback since Ben Roethlisberger in 2004. Like the rest of the team, Pickett’s play got off to a bumpy start but smoothed out by year’s end. As Nagy mentioned, Pickett led back-to-back fourth quarter comeback drives, the first rookie to ever do so, against the Las Vegas Raiders in Week 16 and Baltimore Ravens in Week 17. After the bye, Pickett threw five touchdowns to just one interception as the offense found an identity to build around.

After a 2-6 start, they rallied to finish with nine wins, joining this year’s Detroit Lions and Jacksonville Jaguars as the only teams to ever accomplish that, reaping the benefits of a 17-game season. Still, the Lions and Jaguars are rightfully viewed as team’s on the rise, the Jaguars making the playoffs and the Lions looking competent for the first time in decades. The Steelers could be considered in a similar boat. The defense played great down the stretch, the offense remains intact, and they have a solid kicker in Chris Boswell.

Pittsburgh’s biggest obstacle is the difficult division and conference they play in. The AFC North is competitive and full of first round quarterbacks in Cincinnati’s Joe Burrow, Baltimore’s Lamar Jackson (for now, anyway), and Cleveland’s Deshaun Watson. The AFC at large is full of elite or rising quarterbacks. Patrick Mahomes, Josh Allen, Justin Herbert, and new faces like Trevor Lawrence.

The Steelers will have to prove their potential next season. Without a playoff win since 2016 and only one AFC North crown over the last five years for a team expected to compete for a Super Bowl every year, it’s been a disappointing stretch. But if Pickett is truly the Steelers’ answer, Nagy’s prediction has a shot at coming true.