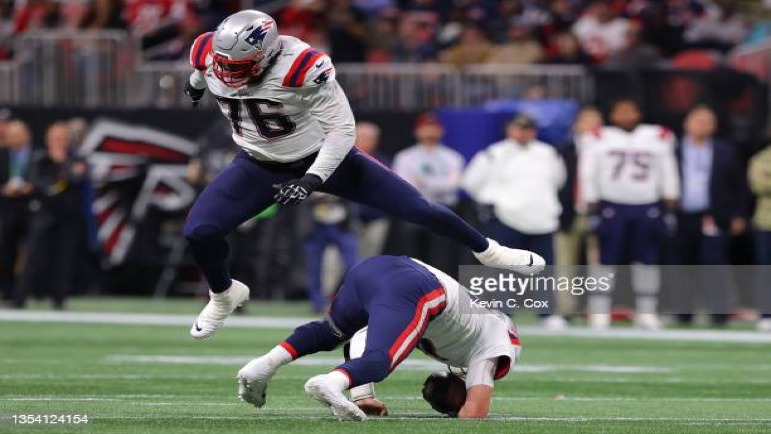 The Pittsburgh Steelers saw their starting offensive line start every game together this year, and the unit’s cohesiveness showed as they progressed well as the season went on. Pro Football Focus put out a list of one offensive free agent for each NFL team to target, and for the Steelers, they suggested adding depth at tackle in the form of 2018 first-round pick Isaiah Wynn.

“The Steelers almost never spend in free agency, so a reclamation project on a former first-round pick who can provide depth at both tackle spots seems right up their alley. Left tackle Dan Moore Jr. has progressed nicely after being selected in the fifth round of the 2021 NFL Draft, and Pittsburgh extended right tackle Chukwuma Okorafor last offseason, but Wynn is a nice insurance policy at both spots. Wynn graded above 70.0 as a pass protector and a run blocker in 2020 and 2021, with his 80.7 overall grade ranking 22nd among tackles. If a starting opportunity doesn’t present itself, Pittsburgh is a good spot for a potential opportunity if either starting tackle falters early on in the 2023 season,” Brad Spielberger wrote.

Wynn has struggled with consistency and injuries during his time with the New England Patriots. He was limited to nine games with just three starts this season, while he’s never played a full season. The closest he came was 16 games in 2021, but prior to that Wynn was only able to play in 18 total games over his first two years in the league. On top of that, his performance has been shaky when he’s been healthy.

I don’t foresee the Steelers signing Wynn to come in and immediately compete for a starting job. As Spielberger noted, Wynn could provide solid depth as the Steelers’ swing tackle. Currently, the team has Trent Scott in that role, but Scott is a pending unrestricted free agent. Wynn’s pedigree will surely be attractive if the Steelers look elsewhere to fill their swing tackle role, but Scott has played for offensive line coach Pat Meyer every season of his career. If the Steelers want Scott back, it’s likely he’ll function as the team’s swing tackle in 2023.

This isn’t the first time Pittsburgh and Wynn have been linked together. Prior to the season when Wynn was the subject of trade rumors, The Draft Network tabbed the Steelers as a team that should make a move for the 27-year-old tackle. Obviously, that was back in August when expectations for the Pittsburgh offensive line were subpar, to say the least, and pretty much any available offensive lineman was being linked to the Steelers. Since then, the line had a respectable year and played some of their best football down the stretch.

If the Steelers look to add outside depth behind Moore Jr. and Okorafor at tackle, Wynn wouldn’t be a bad way to go. But Wynn isn’t the guy you sign to replace one of them, especially given his health and the fact that he just hasn’t been all that good and certainly hasn’t lived up to his status as a first-round pick. If there isn’t much of a market and the Steelers can get Wynn cheap and view him as an upgrade over Scott, bringing him in to add a veteran swing tackle who might still have some untapped potential could be a solid move.