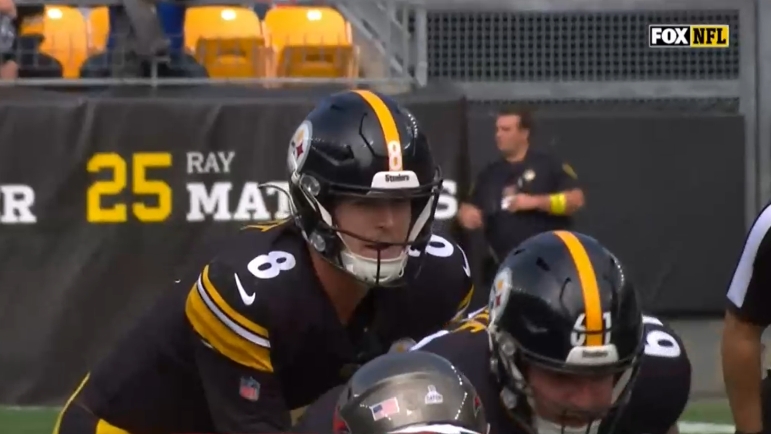 The Pittsburgh Steelers are in the midst of a transition, especially on offense as many veteran players have left the team in the past few seasons. Due to that, a lot of the future success on the football field in Pittsburgh will be coming down to the young players and in particular, rookies.

So far, the Steelers’ 2022 rookie class looks to be performing well with quarterback Kenny Pickett and wide receiver George Pickens being the two obvious standouts. When meeting with the media today, center Mason Cole was asked what he has seen and thought about this year’s rookie class.

“Our rookies have been great,” Cole said in a video posted to Steelers.com. “They haven’t been perfect, but they’ve been great and they’ve come to work every day. They’re really coachable, which is important. When you have a coach like Mike Tomlin it’s good to be coachable because the stuff he says is so accurate and so prevalent in the game of football. If you would’ve asked me maybe week three or four I maybe wouldn’t have said that, but as the season’s gone on they’ve kept their nose to the grindstone and just gone to work.”

Of the Steelers’ seven rookies they drafted this past spring, five have seen playing time with only fourth-round pick Calvin Austin III not seeing any playing time due to being placed on injured reserve and seventh-round pick Chris Oladokun getting cut.

As stated earlier, Pickett and Pickens have been the standouts, with Pickett really coming on since the bye week. On the season Pickett has thrown for 2,209 yards, six touchdowns (two game-winning touchdowns), and nine interceptions. He has also led four game-winning drives which is tied for fifth-best in the NFL. Pickens has caught 49 passes for 729 yards and three touchdowns while becoming a fan favorite already.

However, after the two stars of the class, the rest of the Steelers 2022 draft class has been playing well too. Third-round pick DeMarvin Leal was off to a good start to the season but then went on IR after Week Five slowing down his upward trend. However, he returned to the field in Week 13 and looks to be a player who will contribute a lot in the future. On the season, Leal has 12 tackles, one for a loss, and has even channeled his inner Cameron Heyward by recording three passes defended against.

The Steelers’ sixth-round pick was Connor Heyward, Cam’s little brother. The FB/TE hybrid has found himself a place on this team when many did not think he would make it this year. He has caught nine passes, one touchdown, and has one rushing attempt, a 21-yard jet sweep to ice the Steelers’ Week 16 victory over the Las Vegas Raiders. Heyward is used mostly as is a blocking tight end, something he is pretty good at, helping open up holes for Najee Harris and Jaylen Warren.

Finally, the last rookie to see playing time this year from the Steelers 2022 draft class is linebacker Mark Robinson. While Robinson has not seen much action this season, he saw plenty of time in Sunday night’s win over the Baltimore Ravens. Robinson saw 50% of the defensive snaps in the game, and if you want to see a breakdown of his play, our own Jonathan Heitritter broke down his play in an article just yesterday. On the season, Robinson has only seen action in three games, and only defensive action in two. In the three games has played in he has made seven tackles.

Overall, Pittsburgh’s 2022 draft class looks to be really good. If it turns out as good as it looks, then former general manager Kevin Colbert would have left the Steelers in great hands. There is still a long way to go, but as Cole said today to reporters, he has seen a lot of growth in the rookies which is a good sign. A rookie class that absorbs coaching will normally work out well. Hopeful these rookies can help lead Pittsburgh to glory soon.