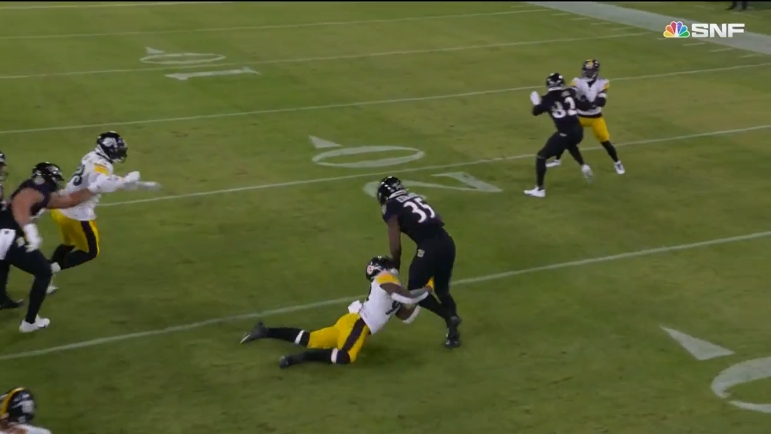 The Pittsburgh Steelers defeated the Baltimore Ravens Sunday night by a final score of 16-13, putting them at 8-8 on the season and a win away from possibly making the playoffs should they get some help next week. Pittsburgh’s final drive will steal the headlines with rookie QB Kenny Pickett piecing together his best moment of his young career, but another fellow rookie also had his best performance of the season in his first career start: LB Mark Robinson.

Robinson got acclimated to the game quickly as he got the start Sunday night over LB Devin Bush and made the first tackle for the defense on RB #27 J.K. Dobbins, holding him to a gain of three yards. You can see that he starts to cheat over to his left at the start of the play but redirects back to the right as Dobbins cut back, unloading on him as Dobbins reaches the second level and brings him down to the ground.

In fact, Robinson got in on the team’s first three defensive plays against Baltimore with the second being a joint tackle with #34 Terrell Edmunds on #89 Mark Andrews and the third being a combo tackle with #90 T.J. Watt on Dobbins for no gain. In the latter play, you see Robinson come downhill hard and fast as LT #79 Ronnie Stanley pulls from left-to-right, managing to get underneath Stanley and wrap up Dobbins by the legs and bring him down to the ground for no gain on the play. Both plays show Robinson’s urgency to fly to the football, whether it be in coverage or as a run defender.

Even when he wasn’t directly making the play himself, there were several occasions where Robinson’s effort made an impact on tape. Take, for example, this rep on the jet motion run to the left where Robinson throws his body into #35 Gus Edwards who decks him, but that collision kept Edwards from getting to Edmunds on the outside, allowing him to make the stop. It’s a selfless play by Robinson who is eager to get out there and knock some skulls as a physical defender.

Mark Robinson played well in terms of keeping his eyes in the backfield and reading the play before pulling the trigger downhill against the Ravens. Here are a couple of examples of Robinson reading the play and either working through trash in the first clip to maneuver his way to the tackle on the running back or play the edge and keep outside leg and arm free to pursue the ballcarrier on the outside like he does against Edwards, chasing him down and bringing him to the ground as Edwards tries to turn the corner.

Mark Robison is relentless in pursuit of the football, getting on his horse and running down ball carriers with an impressive effort. We see that on this rep where Robinson runs from the box to the left sideline full speed to get in on the tackle of the TE who catches the shot pass in the flat. The receiver is already wrapped up, but Robinson makes sure to get in on the action and finish the play.

Robinson plays like a bull in a China shop, looking to knock over and destroy on contact. This leads Robinson to make some big hits on ballcarriers, but also can cause him to come in uncontrolled at times as a tackler, resulting in him not making clean tackles to bring skill players to the ground. Sometimes the power that Robinson hits ballcarriers with is enough to bring them down like on this shoulder pop on Dobbins as #57 Montravius Adams also gets in on the action, dropping him shortly after getting the ball for minimal gain.

However, there are other moments like this play on Dobbins where shoulder/arm tackles don’t effectively bring down the runner as Robinson leaves his feet and lunges forward to try and make the stop. Given his lack of size and arm length, Robinson will miss a few of these erratic tackles attempts, leading to extra yardage gained by the ballcarrier.

While Robinson showed moments of good processing and reading the play, he does need to improve his ability to process quicker to evade blocks, fill gaps, and keep up with pass catchers in coverage. Watch this play where Robinson is following the motion man across the LOS but gets sealed off from the edge by #84 Isaiah Oliver coming off a chip block. Robinson doesn’t see the block coming as Dobbins gets loose into the second level for a big run off the right side for first-down yardage.

Overall, Mark Robinson 26 defensive snaps (50%) in his largest exposure of the season to date. For context, Myles Jack logged only six defensive snaps as he continued to deal with a groin issue and would eventually leave the game after aggravating the ailment. Despite being healthy, Devin Bush logged only five defensive snaps last night, appearing to get benched in favor of Robinson and Robert Spillane who managed to help Pittsburgh stop the run in the second half. In fact, Bush’s snaps have been trending down in recent weeks, logging just 21 defensive snaps (40%) the week prior against the Raiders and 25 snaps (54%) against the Panthers the week before that.

While Robinson is still visibly raw at the nuanced aspects of the position including post-snap reads, coverage, and consistent wrap-up tackling, there is no denying the impact he had on the defense in this game. Robinson was an energizer bunny, visibly showing his eagerness and passion to be on the field and hit someone. His teammates noticed the same thing and fed off his energy as he played fast and physical in a rivalry game with the Ravens that calls for that demeanor of play to defeat the opposition.

Last time Pittsburgh played Baltimore, they were beaten on both sides of the football, being unable to stop the run game while having their rushing attack falter. This time around, Pittsburgh got the edge on their division rival, rushing for nearly 200 yards on the game while neutralizing the Ravens’ running game in the second half. Mark Robinson was a big part of that, to which HC Mike Tomlin praised his ability to step up in the moment. Tomlin specifically stated that they played Robinson over Devin Bush due to his “combative, confrontational approach to ball,” something that Bush hasn’t been able to bring back to the same level post-injury.

With a chance at avoiding a losing record and potentially making the playoffs on the line next week against the run-heavy Cleveland Browns, look for Robinson to start once again as it appears that he has successfully usurped Bush on the depth chart. With Bush and Spillane scheduled to be free agents this offseason and Myles Jack’s underwhelming first season putting his future in Pittsburgh in doubt, Robinson has a shot to audition to be the team’s starting ILB not only for the conclusion of this season but also to start 2023.

What are your thoughts on Mark Robinson’s performance against the Baltimore Ravens? Do you think he played well in his first NFL start? Should he become Pittsburgh’s full-time starter next season? Please leave your thoughts in the comments section below and thanks again for reading!