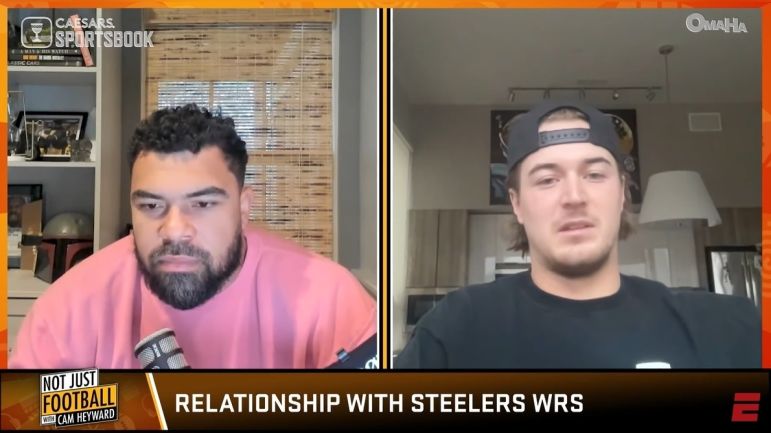 Rookie to rookie. That was a connection Kenny Pickett had throughout the year. And most often, it was Pickett to Pickens, the two quickly forming chemistry. Hey, that’s easy to do when your target is a 6’3, 200-pounder player who can jump out of the gym. Throw it to #14 and let him make a play. That’s what Pickett did all year long.

Speaking to Cam Heyward on the latest episode of his Not Just Football podcast, Pickett described what it was like going through his rookie year alongside Pickens.

“George is my guy,” Pickett told Heyward. “Man, we came in together. We had a lot of time throwing early on so I think that’s why that connection was there really early on and it lasted throughout the season.”

The team’s first and second-round picks, the two immediately started practicing together. That began with rookie minicamp, well before the other veteran receivers arrived. And early on, both had to earn their way to first-team reps, meaning they ran with the 2’s and 3’s throughout the spring and early summer. Pickens climbed the ladder before Pickett but by Week 5, the pair were starting together.

As Pickett has said in the past, and it’s obvious to see, throwing to Pickens is a lot of fun.

“Probably the most athletic player I’ve ever had a chance to play with…he does some things in practice that are so casual, that for him they’re casual, like an everyday play. You’re looking around like, ‘that was the best catch I’ve ever seen in practice.’ Then he had the one versus the Browns and it just seems like if you put it in his zip code he’s gonna come down with it.”

Of course, he’s referring to his incredible grab against Cleveland in Week 3, reaching out over his head for a one-handed grab down the sideline for a 38-yard pickup. It was Mitch Trubisky who threw it, not Pickett, but an incredible play all the same.

When Pickett took over, Pickens kept making plays. Together, Pickens caught 38 passes for 555 yards and four touchdowns. The yards and the touchdowns were the most Pickett threw to anyone; in fact, the four touchdowns made up for 57.1% of Pickett’s total touchdown passes and were the only ones thrown to a wide receiver. As the old adage goes, Pickens is a 50/50 player, throwing the ball up to him and giving him a 50% shot to make the grab. Pickett modifies the phrase just a bit.

Both players will be better off for their ups and downs during their rookie year. Both were ready to play and they learned by doing. Now entering year two, they should see a big leap in their play as they look to propel this offense into the top half of the league. Pittsburgh’s identity will still be through its ground game but Pickett and Pickens should put up good numbers in 2023.