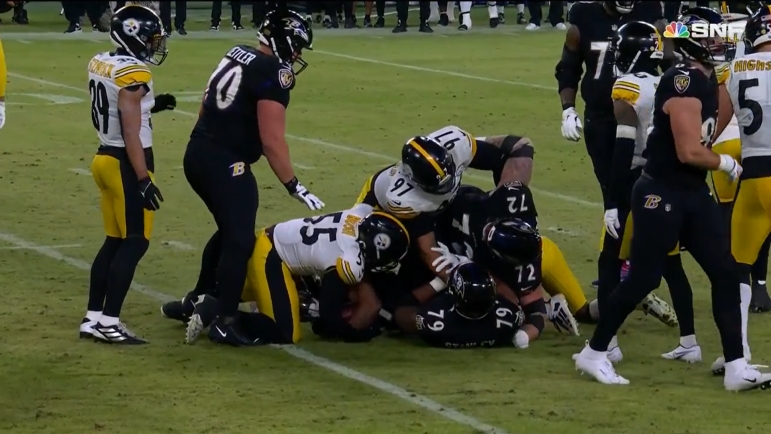 Just when it looked like the Pittsburgh Steelers defense was going to get off the field late in the first half after stopping Baltimore Ravens running back J.K. Dobbins for a 7-yard gain on 3rd and 16, things took a disastrous turn for the black and gold.

All-Pro defensive lineman and team captain Cameron Heyward got caught up in the pile after the third-down run stop and got into a bit of a pushing match with Baltimore guard Ben Powers and tackle Ronnie Stanley. Heyward was ultimately pulled down onto the pile while trying to get up and made contact with an official.

Because he was viewed as the aggressor in the moment, Heyward was called for a shocking personal foul unnecessary roughness penalty after the play, extending the Baltimore drive. That costly post-play penalty allowed the Ravens to score a touchdown on the next play as quarterback Tyler Huntley found rookie tight end Isaiah Likely from 7 yards out for the score, giving Baltimore a 10-3 lead at the half.

Minkah on the exchange:
"It’s just football. Something happens. We were just talking through the play. Making sure that at the end of the day, we are doing what we’ve got to do to win. That’s it." https://t.co/4ZZ4WI48k0

Following the four-point swing in the game, Heyward and fellow team leader and star safety Minkah Fitzpatrick were caught on TV cameras yelling at each other on the sideline in a rather heated moment. In an emotional moment in a heated matchup, the display on the sideline from the two team leaders wasn’t surprising, nor was it a big deal.

In the end, the Steelers defense buckled down, regrouped at the half and turned in a dominant performance in the second half, eventually picking up a 16-13 win on the night, keeping their playoff hopes alive.

After the win, Cameron Heyward appeared on the post-game show on NBC with hosts Jack Collinsworth and Rodney Harrison and explained his perspective of the play and the fallout afterwards.

“I got caught up, and then I got pulled back down and I was…oh, and now it looks like I hit the ref,” Heyward stated after the game, according to video via the NFL on NBC YouTube page. “I felt like I was going down, but, you know, in the moment the guys were trying to figure it out. Mink [Minkah Fitzpatrick] was mad at me. But, we were able to regroup at halftime, swallow my pride and just keep going.”

That the penalty occurred late in the first half and allowed the Steelers to get to the locker room to regroup behind closed doors was huge. Being able to do that allowed things to calm down overall and let the Steelers defense get back to playing football, which they did rather well in the second half, allowing just three points while shutting down the Ravens time and time again.

The penalty was pretty ridiculous overall as Heyward really didn’t do anything. That said, that’s a situation he should try to avoid, especially in that situation. You just can’t trust NFL officials to officiate games correctly, especially emotional, high-stakes ones like this one.

In the end, the penalty didn’t hurt them where it mattered most: in the win column.