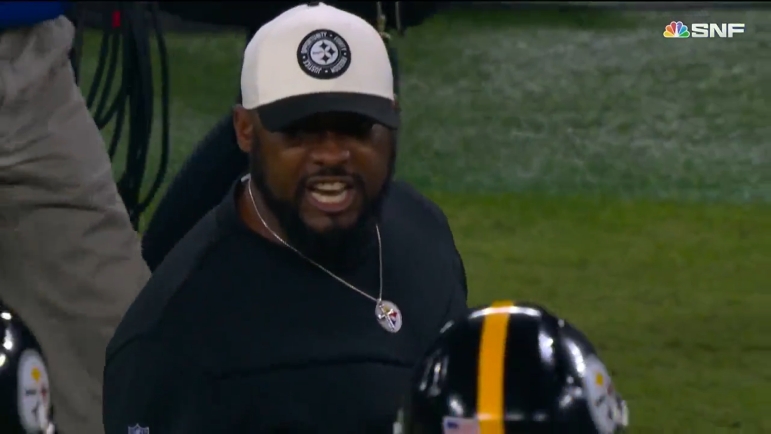 The Pittsburgh Steelers’ turnaround from 2-6 to 9-8 and on the cusp of the postseason was fun to watch and certainly an impressive feat. No small part of that is due to Mike Tomlin. His words during the team’s Week 9 bye week clearly stuck with the players, and the second-half Steelers were almost a whole new team from the team that struggled to do much of anything early in the year. As a result of the team’s turnaround, The Athletic named Steelers Head Coach Mike Tomlin a Coach of The Year candidate.

“When the Steelers opened the year 1-4, then sagged to 2-6, it appeared as if Tomlin’s remarkable run of never having a losing record in his 15 seasons as a head coach would come to an end. But somehow, Tomlin directed a turnaround that carried the Steelers to a 7-2 record down the season’s stretch. Rookie quarterback Kenny Pickett displayed promise, the same Steelers defense that opponents gashed for 24.6 points a game during the first eight games tightened up and held foes to just 16.5 points a game, and the Steelers damn near made the playoffs,” Mike Jones wrote.

Tomlin’s had some seasons that are better than others, and there are years where the team has certainly underperformed. It’s why citing the “no losing record” streak is a little bit dumb when referencing Tomlin’s coaching prowess. I’m sure he’s not satisfied with 8-8 or 9-8 seasons, so we shouldn’t really be either. But with that being said, this year should go down as one of his best coaching jobs yet. Obviously, not being able to make the playoffs dings the performance a bit, but going into Week 18 with something to play for with a rookie quarterback and one of the youngest offenses in the league is undeniably impressive.

“Tomlin’s Steelers narrowly missed the playoffs, but pulling off such a turnaround truly is impressive. Even more impressive: 16 seasons without a losing record. As mentioned, Tomlin faced long odds to pull off a winning season considering the shaky depth at quarterback and the injuries Pittsburgh endured. But the NFL’s second-longest-tenured coach delivered another masterful job, and the Steelers finished the year as one of the hottest teams around,” Jones wrote to justify his selection of Tomlin behind Shanahan.

I don’t really think Tomlin’s streak deserves any sort of consideration whatsoever in considering whether or not he deserves Coach of the Year honors in 2022, but I digress. I think Tomlin absolutely deserves consideration for the work he did this year. The Steelers weren’t supposed to be a playoff team, and he made them into a team that got hot at the right time and had a shot to make the playoffs. But it’s not as if they overperformed all that much. Before the year, the team had a 7.5 over/under win total. They outperformed it, and I’m sure the total would’ve been lower if Vegas knew that T.J. Watt was going to miss seven games.

Still, I’m just not sure I’d have Tomlin ahead of someone like Daboll, who took over a Giants team that really wasn’t supposed to be anything special and made them into a team that’s now playing in the divisional round. It was an impressive turnaround and the Steelers got hot at the right time, and Tomlin does deserve a lot of credit for that. In the end though, the Steelers were a 9-8 team that didn’t make the playoffs. Hypothetically, if the team started the year 4-4 instead of 2-6 and then went 5-4 post-bye, I don’t think Tomlin would get much consideration.

The fact the Steelers were playing their best ball when the season ended is impressive and certainly noteworthy, but it doesn’t mean much if the team isn’t in the playoffs. Tomlin did a great job, but I just don’t see him being a legitimate candidate for Coach of The Year.