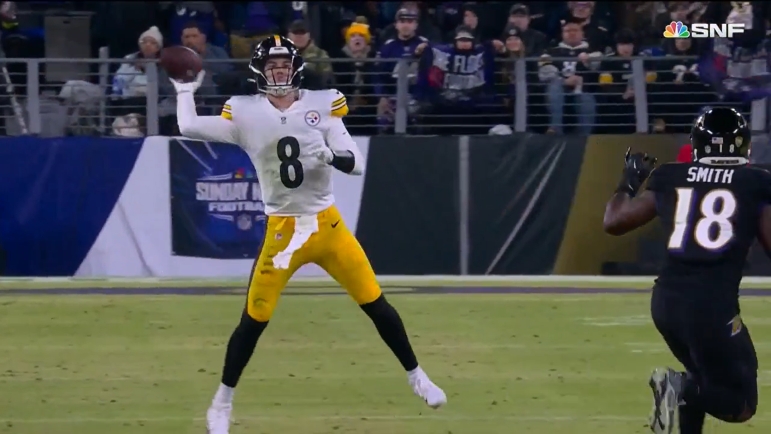 The Pittsburgh Steelers went into Baltimore and won once again in dramatic fashion for the second-straight week, beating the Ravens 16-13. Pittsburgh dominated on the ground in this one, running for 198 yards, outpacing the Ravens who had 120. The passing game was largely ineffective for most of the night until the final drive when QB Kenny Pickett completed five-of-six pass attempts for 64 yards including the 10-yard TD pass to RB Najee Harris with 56 seconds left on the clock.

Right before Tomlin opened up for questions from the media, he made sure to commend Pickett for his clutch performance in the waiting moments of the game to help Pittsburgh secure victory.

“Can’t say enough about our young QB,” Tomlin said to the media Sunday during his post-game press conference which aired on the team’s YouTube channel. “He smiles in the face of it. He’s always ready to be that guy in the moments that we need him to be that guy, and it’s just good to see a young guy.”

Kenny Pickett’s overall stat line won’t knock your socks off as he completed 15/27 pass attempts for 168 yards and the TD to Harris. Still, while Pickett barely had over 100 yards passing prior to that game-winning drive, he came through in the clutch yet again, following up his performance last week against the Raiders with another impressive drive to help bring the Steelers back to .500 on the season.

Pickett connects with Steven Sims for a huge gain 👀

With one game left to play against the Cleveland Browns, the Pittsburgh Steelers not only have battled back from a 2-6 start to the season to be in position to help prolong Tomlin’s no-losing season streak another year, they also are in position to secure the final Wildcard spot in the playoffs with a win and some help next week.