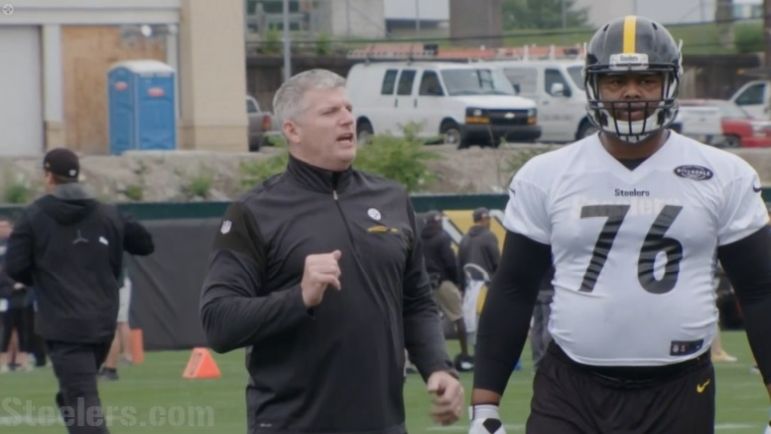 Earlier in the week, we wrote about Peyton Manning downplaying the idea of “halftime adjustments,” the phrase you hear all the time when a team turns around their fortunes in the third and fourth quarter. Manning said the idea was overblown. For players, they got in the locker room, went to the bathroom, ate a quick snack, and it was right back out on the field.

But as we noted in our commentary, if anyone is tweaking things, it’s the coaching staff. That’s what Ben Roethlisberger made clear during a Thursday interview on 102.5 DVE. Roethlisberger told the show former OL Mike Munchak was the best at changing things during intermission.

“I think some coaches are better at it than others,” Roethlisberger said. “I always thought Coach Munchak was amazing at making halftime adjustments.”

With Pittsburgh, Munchak was regarded as one of the league’s top offensive line coaches and his adjustments and ability to work on the fly was evidently one of the many things he was good at. Perhaps it helped he could coach through a player’s lens. A wildly successful lineman, nine-time Pro Bowler and Hall of Famer, he could relate to players better than most coaches. With his resume, he also earned instant credibility, making it easy for players to buy what he was selling, and he likely leaned on his experiences adjusting as a player and carrying that over as a coach.

It probably helped that for a long stretch, the Steelers had continuity along the offensive line. With few changes up front, it was easy to have the whole group adjust at halftime. They all knew each other, understood each other, and spoke the same language.

Though Roethlisberger praised Munchak, he admitted no coach created a whole new system at the break.

“I think people also skew the halftime adjustments. It’s not like you’re like,’ okay guys, we’re gonna take this playbook and throw it out and here’s the new playbook for the second half…[it’s like] we’re seeing them do this on third down, so we’re gonna go to this. You’re not like drawing new concepts at halftime. You’re bringing stuff up maybe from, ‘remember in week three we did this play because we saw this, well, we’re gonna bring it back.'”

And those are things you hear players speak about all the time. Even Kenny Pickett referenced some of that happening in his rookie year. That’s what a coach does. One reason for a team’s “scripted” plays at the start of a game is to fact-find about a defense. To gather information on how they’re playing a certain concept, how they adjust to a specific motion or alignment, to counter it later in the game. For as much as a coaching staff can gameplan and prepare, you’re never certain what the opposition has planned until you take the field.

Though Munchak is gone, the Steelers have had success under new offensive line coach Pat Meyer. The team’s third o-line coach in three years, he built up the current starting five into a passable unit that definitely grew over the course of the year. Good health played a role, the same group started the entire year, but the line wasn’t the liability it was perceived to be at the start of the season.