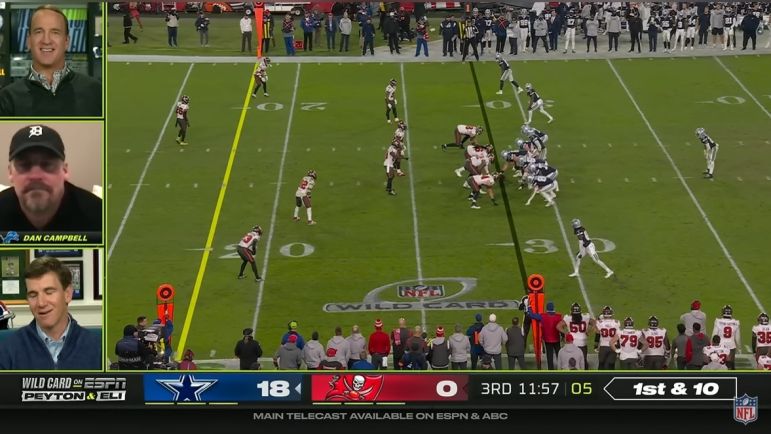 Halftime adjustments. On the surface, it felt like something the Pittsburgh Steelers did plenty of this year (and last year, and the year before…). Go down early, regroup, battle back in the second half. That’s what the Jacksonville Jaguars sure seemed to do over Wild Card weekend, storming back from 27-7 down at the half to win 31-30, the third-largest playoff comeback in NFL history.

But to Peyton Manning, the idea of throwing the playbook out the window and coming up with something new over that 15-minute break is nonsense. On the last episode of The ManningCast Monday night, Peyton and Eli Manning commentating over the Buccaneers/Cowboys game, Peyton said he never made halftime adjustments throughout his career.

Here were Manning’s thoughts as captured by the sports media site Awful Announcing.

"I don't know if I ever made a halftime adjustment in my entire 18-year career. I think that's the biggest myth in football- the halftime adjustments. You go in, you use the restroom, you eat a couple of oranges, and then the head coach says, 'Alright, let's go!'"- Peyton Manning pic.twitter.com/j17FWpXChq

“I never made a halftime adjustment in my entire 18-year career. I think it’s the biggest myth in football. The halftime adjustment. You go in, use the restroom, eat a couple of oranges, and then the head coach says ‘alright, let’s go.'”

At the end of the clip, you can hear Eli agree with Peyton responding “no time.”

And who are we to argue with those two. Halftime adjustments are largely overblown. Teams don’t have the ability to make large changes to their approach or gameplan that’s been worked on and repped throughout the entire week. Coaches can make subtle tweaks and it is a chance for the entire staff to come together, as opposed to being separated by those on the sidelines and those up in the booth.

At best, halftime is a chance to regroup. To calm down, briefly take the emotions and intensity of the amount, and reset the group. That’s what the Jaguars seemed to do in their comeback bid. Their gameplan didn’t look different. It was just a young team calmed down by a veteran coach in Doug Pederson and a group that simply played better than the first half. They stopped turning the ball over, finished drives, and got stops on defense. Simple as that.