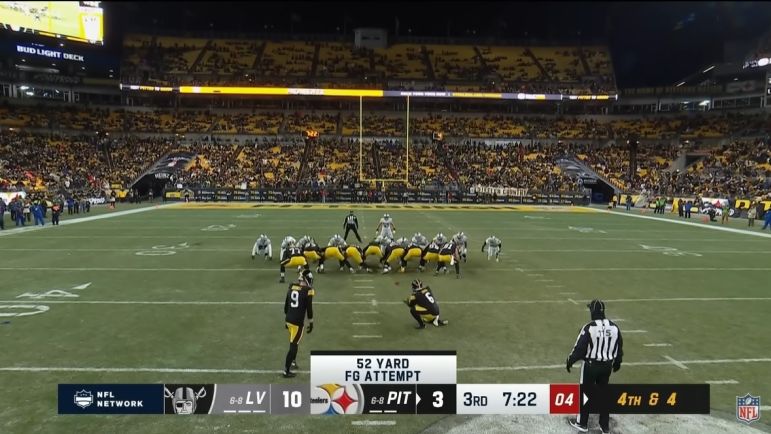 Mike Tomlin’s famous phrase is “we don’t live in our fears.”

But on 4th down this season, Tomlin sure got scared.

The Athletic’s Ben Baldwin put together a graph of the most and least aggressive teams on 4th down this season. Situations where analytically, the data said teams should go for it compared to times where the data said it was a toss-up. Pittsburgh went with the safe call about as often as any team.

Here’s Baldwin’s chart that shows the Steelers in the “full of fear” category. I’ve embedded the graph as a photo to avoid linking to a Twitter thread but you can find the actual tweet by clicking here. 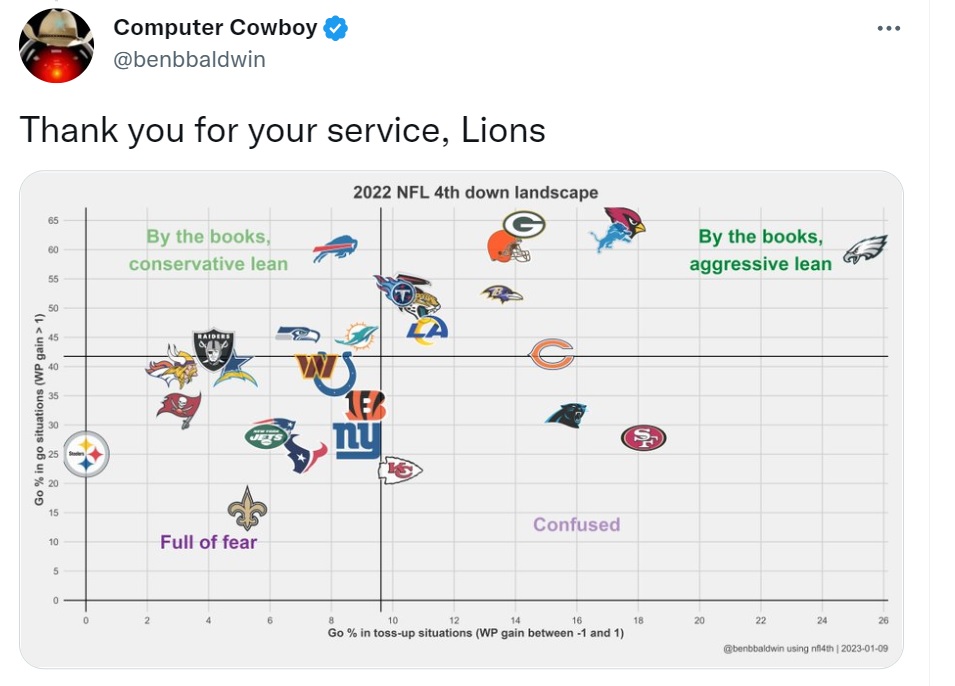 The Steelers were easily the NFL’s most conservative team in toss-up situations, going for it a whopping 0% of the time (going at least 0/24 in those moments). They ranked only slightly better league-wide in “go for it” moments, about 25% of the time, but that still ranked near the bottom of the league and just ahead of the Kansas City Chiefs and New Orleans Saints.

Though there are many, here’s one such example of Tomlin being conservative. Baldwin has a “4th down bot” that tracks all decisions across the league. In Week 16 against the Las Vegas Raiders, the Steelers faced a 4th and 4 at the Raiders’ 34 trailing 10-3. On a bitterly cold and windy day, the analytics strongly recommended Tomlin go for it. Instead, he attempted a 52-yard field goal, missed by Chris Boswell, and giving the Raiders excellent field position.

There was a point in time where Tomlin was more aggressive. In 2016, they led the way in two-point conversion attempts. Not anymore. This year, he was conservative across the board.

The reasons though seem obvious. Pittsburgh had a young and oftentimes fragile offense that was hard to trust. Turning the ball over on downs is like an actual turnover and that data showed the Steelers don’t win when they give the ball away, going 2-7 in such games this season.

A defensive-minded head coach with trust in that side of the ball, the Steelers’ defense played terrific ball the second half of the year. Pittsburgh’s calculation was to not take risks on offense, choosing punts and field goals over fourth down tries, keep the score down, and let their defense make plays and win the field position battle.

It’s also worth noting that being aggressive doesn’t correlate to being good. The Philadelphia Eagles were among the league’s most aggressive teams but so were the Arizona Cardinals, Green Bay Packers, Detroit Lions, and Cleveland Browns, all teams who failed to make the playoffs. More conservative teams like the Buffalo Bills, Cincinnati Bengals, and Minnesota Vikings all had successful seasons. So wins and losses aren’t defined by how often a coach goes for it on fourth down.

But the numbers are the numbers. Anytime the Steelers finish on an extreme, towards the top or towards the bottom, it’s worth writing about. And these numbers go against Tomlin’s “don’t live in fears” mentality, a phrase he’s used less often in recent years, something reflective in how the team has approached the game.