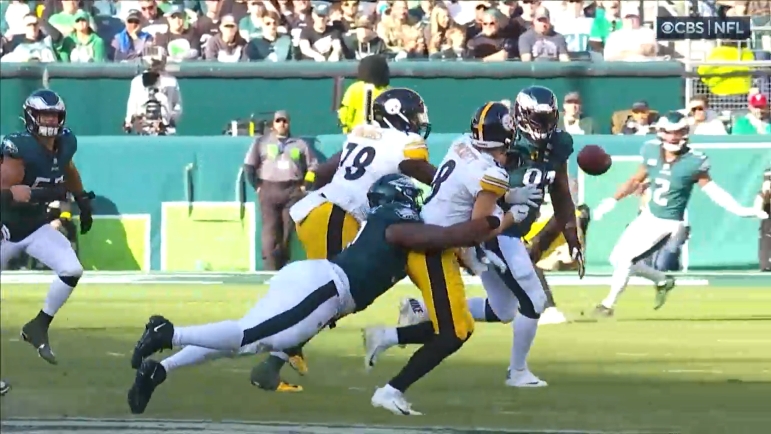 The 2023 free agency signing period will get underway in a less than two months from now and when it does, several fans of the Pittsburgh Steelers appear to be hoping that defensive tackle Javon Hargrave, who is currently a member of the Philadelphia Eagles, will be headed for a free agency reunion with his former team. That observation aside, Bob Labriola, the Senior Editor of Steelers.com, made it known Tuesday morning that he thinks such a reunion is unlikely.

In his daily questions and answer post on steelers.com, Labriola was asked by a reader if it’s possible that Hargrave returns to the team that originally drafted him in 2016 as a free agent this offseason.

“Javon Hargrave can become an unrestricted free agent in March 2023, and at this point I would imagine his return to the Steelers is wishful thinking on your part,” Labriola replied.

In his three seasons with the Eagles, Hargrave has registered 161 total tackles, 42 quarterback hits and a whopping 23 sacks. The South Carolina State product also has four passes defensed, two forced fumbles and three fumble recoveries since joining the Eagles in 2020.

Strangely enough, the Steelers new Assistant General Manager, Andy Weidl, was the Eagles’ Vice President of Player Personnel when Hargrave decided to sign with Philadelphia in 2020 after

Hargrave will turn 30 years of age in February, however, so there is that to consider and especially when it comes to him potentially landing back with the Steelers this offseason on a lucrative deal.

Hargrave’s current contract has an average yearly value of $13 million. Will the Eagles place the franchise tag on Hargrave in hopes of retaining him this offseason? Might they work out an extension with him before it gets that far? We’ll see. In the meantime, however, Hargrave and the Eagles are still in the playoffs this year and they are readying themselves for their first game in the Divisional Round this coming weekend.

Should Hargrave have a nice playoff run the next several weeks, his value should rise even more.

While the Steelers seem like they could certainly use another defensive tackle this offseason, and especially one as accomplished as Hargrave is at this point, it does seem unlikely that a reunion is forthcoming in March.

Should Hargrave not remain with the Eagles this upcoming offseason, odds are probably strong that he will land with a team other than Pittsburgh on a multi-year, lucrative deal. In short, I think Labriola is probably right here.