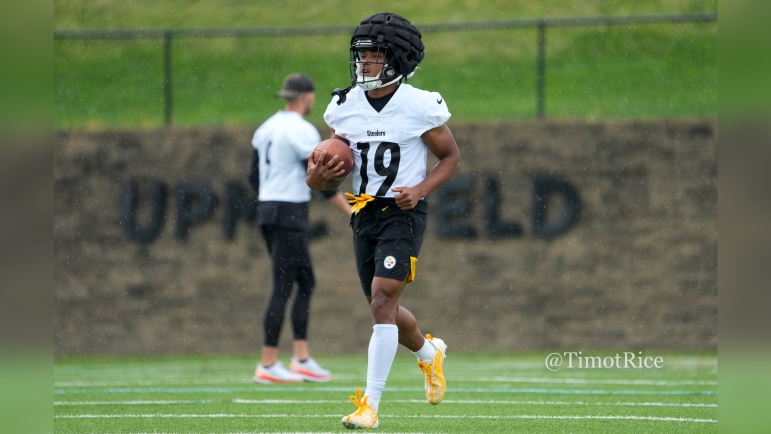 While the focus remains on the 2022 season and the Pittsburgh Steelers suddenly real playoff hopes, QB Kenny Pickett made mention of a player who will hopefully help the team in 2023. In Pickett’s mind, WR Calvin Austin III will be a real force in the Steelers’ receiver room next season.

Speaking to reporters Wednesday, Pickett included Austin in the young group that will be on the field next year.

“So, I think it’s huge for the young guys that have gotten to be able to play,” Pickett said via team transcript. “And there’s some other guys I think are going to be, Calvin Austin off the top of my head, a player for us, just from what I saw early on. I think there’s a lot of young talent that we have…I think the pieces are there.”

The first part of Pickett’s answer was regarding the value of reps as a rookie. Pickett has the “learn by doing” philosophy and the Steelers’ youth have logged plenty of snaps this year. Pickett’s been the team’s starting quarterback since Week 5 while second-rounder WR George Pickens, third-rounder EDGE DeMarvin Leal, and UDFA RB Jaylen Warren have all logged substantial playing time this year. Even seventh-rounder LB Mark Robinson has earned playing time late in the year to carry over into 2023.

Austin was supposed to be part of that group. But he suffered a foot injury in training camp and began the year on IR. Pittsburgh designated him to return mid-season but he had a setback in his rehab, needed surgery, and was placed on IR again, this time for good. He won’t suit up again until OTAs in the spring and he’ll have to make up for a lost rookie season. To date, he’s yet to play in a NFL game.

Austin did at least get a couple of weeks of training camp practices in. Over a handful of moments, he flashed, showing the 4.3 speed that got him drafted with a 76 yard touchdown catch during one practice. In our summer evaluation, here’s what we wrote:

“Austin did most of his damage deep downfield or at/behind the line of scrimmage, getting involved in the jet/pop pass game and showing quickness. He carried the ball four times for 21 yards and had a couple other pop passes, jet runs but with a forward pass that would create an incompletion, not a fumble, if the ball wasn’t cleanly secured, that generally went for good yardage.”

But the sample size is small and judging a player based on a handful of practices, some of which weren’t even in full pads, is dangerous to do. A small fast player with multiple foot injuries/setbacks is a discouraging sign. But he should be fully healthy come the spring and he’ll have a second year to impress. At the least, he’s taken mental reps this season and briefly during the regular season, resumed practicing with the team. While he’ll have a lot to prove, he won’t feel completely like a rookie next year.

Still, it’ll be interesting to see if the team looks to add a slot receiver. Based on the lack of production therefrom Steven Sims and Gunner Olszewski along with Austin’s injury, odds are strong they’ll bring someone else in during the offseason. A veteran presence would be ideal, a Jerricho Cotchery type to guide a young room.