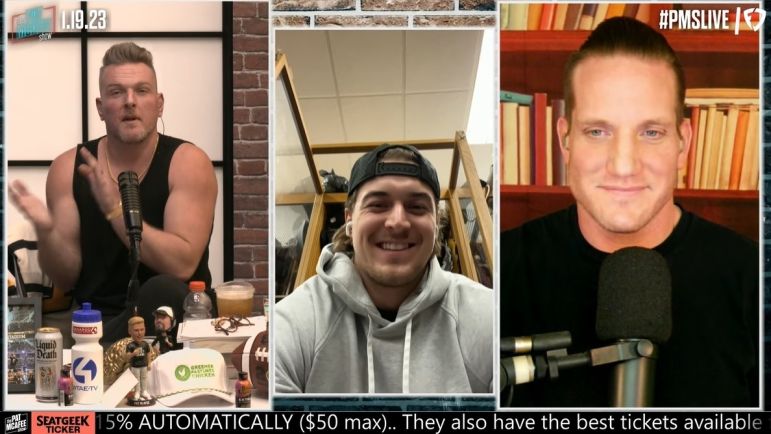 Kenny Pickett will be the Pittsburgh Steelers’ starting quarterback next season. And Matt Canada is returning, too, the polarizing Steelers’ offensive coordinator officially retaining his role as offensive coordinator. To hear Kenny Pickett tell it, he supports the team decision. Appearing on The Pat McAfee Show Thursday afternoon, Pickett credited Canada for the Steelers improving the offense throughout the year.

“Growing with him throughout the season,” Pickett told McAfee. “Understanding how he likes to call plays in certain situations. All the time that we put in together that people don’t see goes a long ways. All the growth and maturity the offense had was a huge credit to him and the bye week bringing us together.”

Pittsburgh’s offense got off to a dreadful start. Sitting at 2-6 at the bye with the league’s lowest-scoring offense and being blown out by the Philadelphia Eagles, it would’ve been logical and acceptable for the team to fire Canada. But they stuck by him, reset with some uncomfortable conversations during the bye, and got a lot better for it.

“I just appreciate the constant communication he had with myself,” Pickett said about his relationship with Canada.

Starting in Week 10, the Steelers’ offense ran through its run game as the team finished the year 7-2. But Pickett himself got better, in part because there was less on his shoulders. He wasn’t asked to dropback 50+ times like he did in losses to the Buffalo Bills and Eagles. While the offense didn’t put up big points, they didn’t turn the football over either. They controlled time of possession, kept the score down, and won games late. Pickett threw just one interception after the bye and led two great game-winning drives to beat the Las Vegas Raiders in Week 16 and the Baltimore Ravens in Week 17.

The Steelers’ offense will remain largely if not entirely unchanged for next season. They’re not expected to lose any key pieces and “top” free agents like TE Zach Gentry and FB Derek Watt can be retained if the team chooses to. In 2023, this is Kenny Pickett’s offense. And his success or failure will be directly tied to Matt Canada’s future. To win the AFC North and compete across the AFC, the Steelers will need to score points and match the best quarterbacks in the league, most of which reside in this conference. It’s high expectations but that comes for a first round quarterback who clearly showed flashes of his potential.

Again, check out the entire interview (you’ll have to scroll back to find it) but it’s worth your time, a solid conversation between Pickett, McAfee, and the crew.